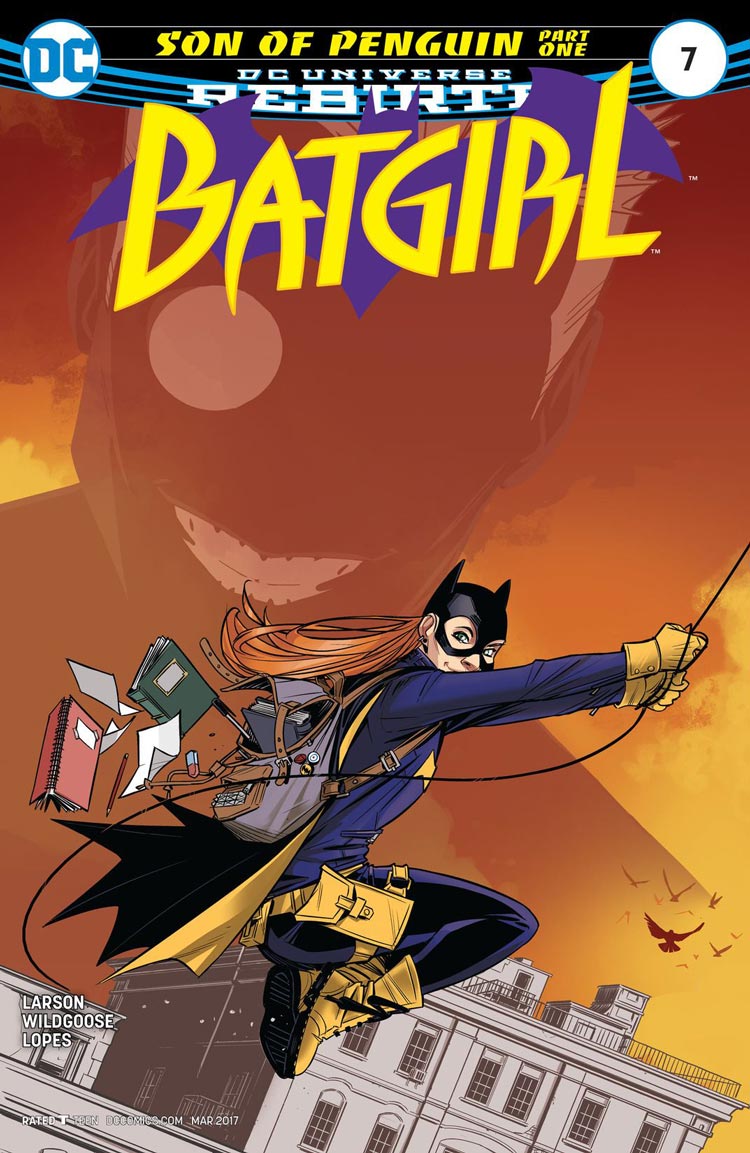 Barbara has returned to find a Burnside changed! Frankie is ready to move in with her girlfriend. Alysia and Jo are planning to have a baby. Even her favorite coffee shop has gone the way of gentrification. And the newest hot guy in town? He just happens to be the son of the Penguin. Yeesh.

After the first story arc of Batgirl’s own Rebirth, we finally see Barbara Gordon returning to some of her roots — both in terms of the friends she left behind and some historical trappings of the character that mean just as much today as they ever have.

It’s fitting, in fact, that Babs return to her classic profession of library science, not just because we as a world need localized, verifiable information more than ever before, but because Batgirl itself has been such a favorite daughter of the American Library Association and librarians nationwide.

Larson made a wise choice here, acknowledging Batgirl’s history and honoring those who honor her, but also by associating Batgirl with a profession that invests itself so deeply in childhood education. Like Teen Vogue and any number of other recent efforts to infuse our future leaders with education, self-determination, and their own set of heroes, Batgirl can be doubly the role model once again for young girls (and boys) everywhere.

Heck, maybe we can even get her back into Congress.

Overall, the issue feels like a kind return to the everyday comfort that the last Batgirl series provided. I’d worry about the ushering out of Babs’ previous supporting cast — most of whom show up in this issue — but there doesn’t seem to be any characters lined up to take their place, as there was once upon a time when Babs hit Burnside for the first time. What we do get is a relaxed Barbara Gordon, re-immersed in the environment and with the characters she loves, who solves as much of her crimes out of mask as she does in.

New series artist Christian Wildgoose does an excellent job capturing so much of what I just described, giving us a pitch perfect Batgirl in costume, and the great image of a young (22-ish) woman living in the hip borough of the city. The moments when Babs is pissed particularly stand-out as illuminating something so quintessentially Barbara Gordon that transcends Burnside and hits all the way back through the best of Gail Simone’s run.

What is missing for me so far in Wildgoose’s presentation (undoubtedly left out of the script by Larson) is any notion of visualizing Babs’ eidetic skills — something that was so impressively rendered in the early issues of this very same series. Too early to tell, of course, if there simply wasn’t room in this first issue or that is a deliberate shift. There does seem to be a certain amount of packed in content that leaves some narrative gaps, unfortunately.

I have no idea who Fright is, or where she came from, or how Batgirl even knows her name. The lack of context there, in the rush to get back to the central Cobblepot mystery is a disappointment to be sure.

Overall, however, Batgirl #7 is a great jumping-on point for fans, especially YOUNG fans, who want to enjoy the world of a young college student who just happens to swing around at night in a bat-costume. Glad to see Larson has maintained her groove and Wildgoose seems so immediately at home with the title. It’s going to be a great ride from here.