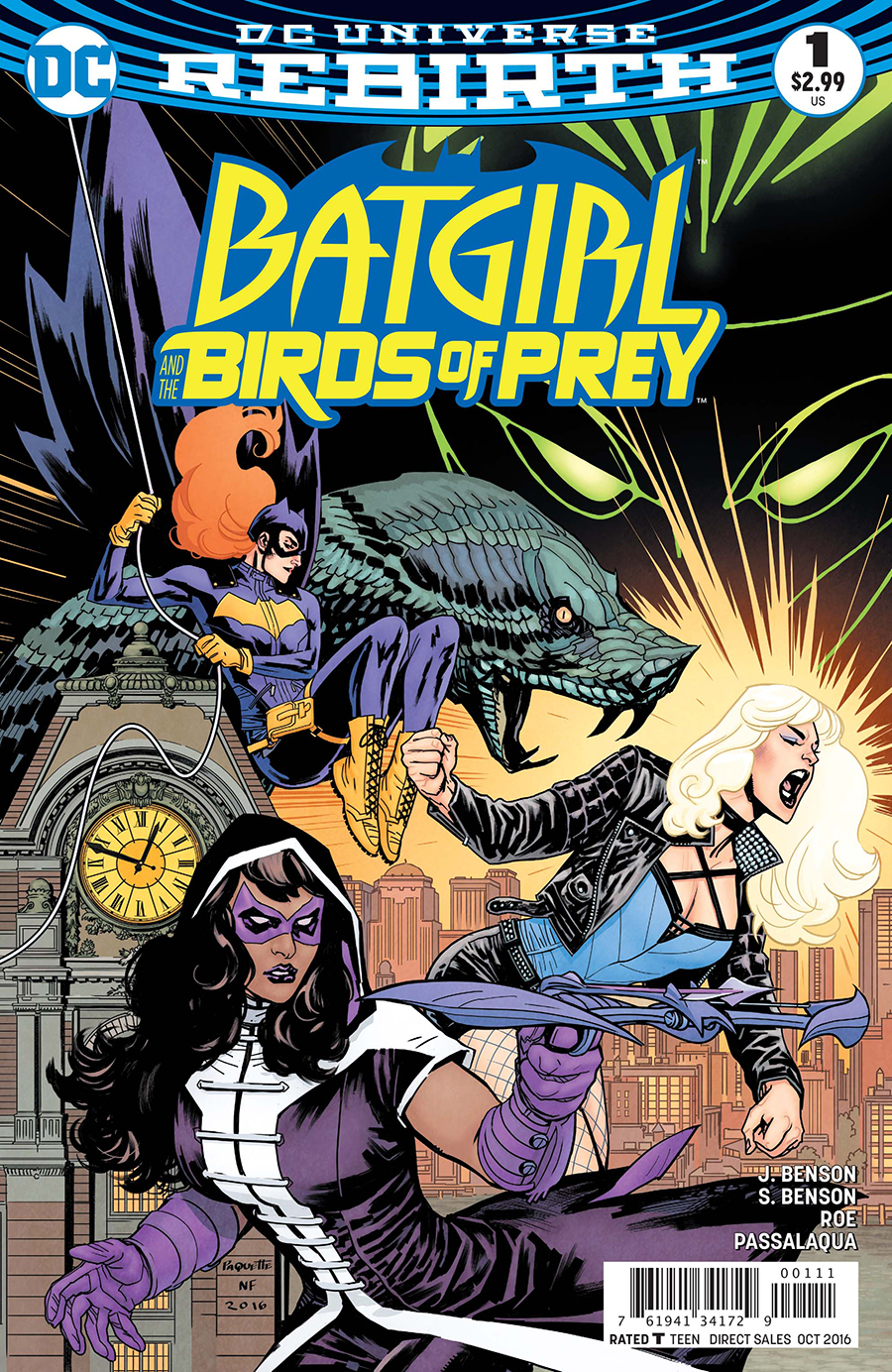 From the skies come your favorite raptors of justice!

As Dinah waxes nostalgic about working with Barbara in the past, they are at odds with Huntress in the present. They are both chasing criminals and imposters whose lines cross in intriguing ways, leading to a confrontation between the trio and later a serpentine villain under the employ of a clandestine figure working with Fake!Oracle.

I thought Batgirl and the Birds of Prey #1 would be one of the stronger entries among the Rebirth titles, but that’s not quite what I got. I think there are a lot of moving parts and what they end up conveying is that this series isn’t quite sure what it wants to be. There’s some great points of continuity I’m glad to see resurfaced, but this first issue combines pre-New 52 story elements with New 52 changes, but not without making the inaugural chapter for this Birds of Prey feel disjointed and kind of clunky.

Julie Benson and Shawna Benson do great by addressing the natural conflict that exists between the Birds. Helena is rash and driven by her emotions, Barbara is calculated and measured, and Dinah is the voice of reason. They’re basically a representation of Freud’s theory of id, superego, and ego, respectively. This tension could end up being very helpful to the story down the road, but so far it reflects some issues with alterations to continuity and a “return” to them that is not subtle or carefully addressed, though that fault is not with either of the Bensons.

Claire Roe draws a mean fight scene, though characters in other parts of the issue appear awkward. Roe’s art is messy, which I feel is important for portraying superheroines with grit and resolve, particularly in a city like Gotham. There are moments where expressions feel weird or proportions feel off, but there are also moments where Roe’s talents excellently capture the emotions and conflict of each of the Birds.

If I had a way to summarize Batgirl and the Birds of Prey #1, it would be: it both works and doesn’t all at once. The nods to continuity both recent and distant are helpful in framing the context of the story, but between characterization, interaction, and visuals, the story ends up being a bit confusing as to the purpose. I have a lot of mixed feelings, but these are also some of my favorite characters so I have faith. I’m not sure where the story is headed, but there could be something awesome in the works.