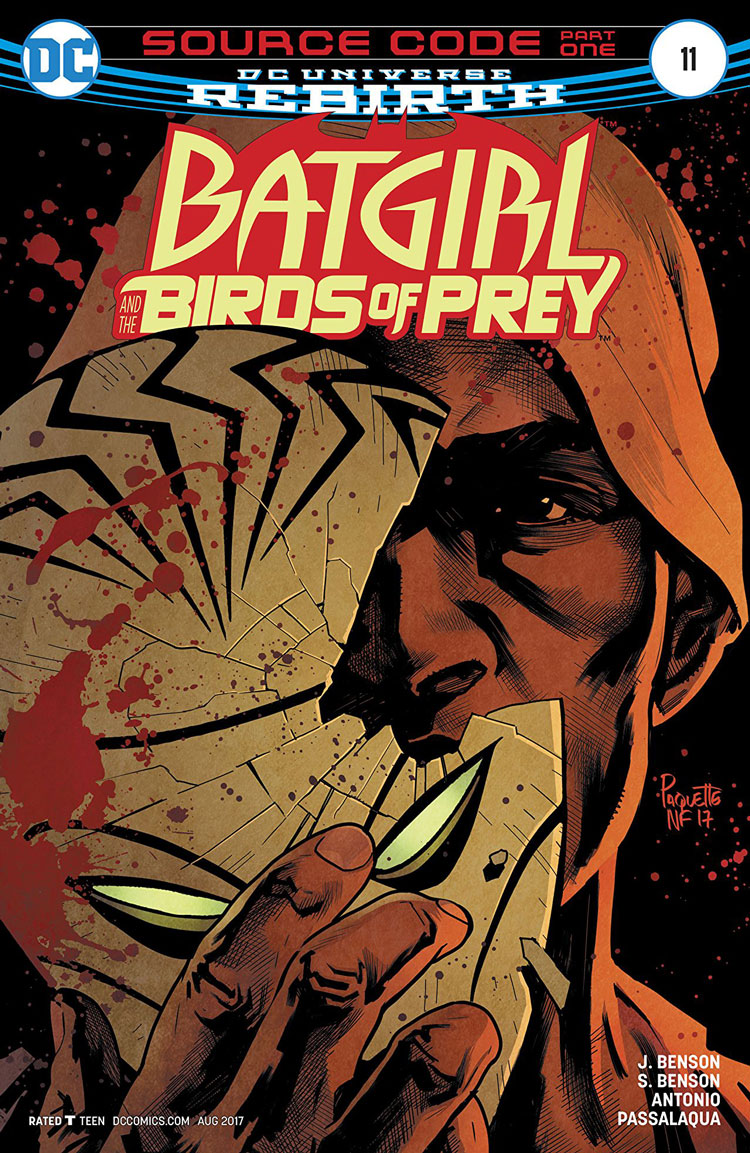 This issue delves into Gus’s backstory and we finally learn how and why he became Oracle.

The Bensons create an interesting backstory for Gus: he became Oracle to financially help his mom, only for the Calculator to take him under his wing and manipulate him into using his skills for criminal purposes. Despite using his computer skills to help criminals, the Bensons make it clear that Gus didn’t know what the information he gained would be used for at first, and that the Calculator used the outcome to blackmail him into aiding more criminals. Gus has done bad things, but he’s trying to make up for them by helping the Birds of Prey.

While telling the Birds about his backstory, Gus also reveals that he has bipolar disorder. I thought the Bensons handled mental illness quite well in this issue, making it clear that a mental illness is a disability as real as a physical disability. I really liked that the Birds offered their support to Gus, and Barbara has a really nice moment with him, as she understands what it’s like to live with a disability.

I really liked that the Bensons set the Calculator up to be the villain of the issue, through the reveal of Gus’s backstory, only to reveal that the Calculator was reaching out to the Birds of Prey for help. Through his villainy and scheming, the Calculator angered the wrong company and now his wife children have been kidnapped. It was a really nice twist, having the heroes have to help a villain, especially one that’s such a classic nemesis for the Birds of Prey.

The Bensons did a lot of great work humanizing the Calculator. He’s set up to be a manipulative, blackmailing villain, but the Bensons also highlight his own struggles with mental illness, emphasize how well he treats his employees, and show how important his family is to him. He’s undoubtedly not a good person, but he’s a fully realized character who’s more than a stereotypical villain.

One of the things I’ve really appreciated about the Bensons’ run so far is the focus on female villains and female storylines, especially with the robber revealed to be Catwoman. I’m really excited to see how Catwoman interacts with the Birds of Prey, and I love the continued focus on female characters.

During the recounting of Gus’s backstory, Antonio focuses on the Birds of Prey’s faces through closeups. This conveys their different reactions to Gus’s story extremely well and helps the reader to clearly see how his story is affecting them emotionally.

I love that the first couple of times we see the Calculator’s face, he’s in shadow. It makes him feel very menacing in Gus’s memories and helps us understand just how threatened Gus felt by him. It allows the reader to sympathize more with Gus because it’s clear that he’s being manipulated by this frightening villain.

The character’s eyes are extremely vibrant: Barbara’s green eyes, Dinah’s blue ones. It really adds to the expression on their faces and allows the reader to read more emotion into them. I also like that Passalaqua used a different color scheme in the flashbacks, with more greens and browns, to help differentiate them from the present storyline more easily.

I really liked the expansion on Gus’s character and I’m interested to see how this will impact his relationship with the Birds of Prey in future issues.