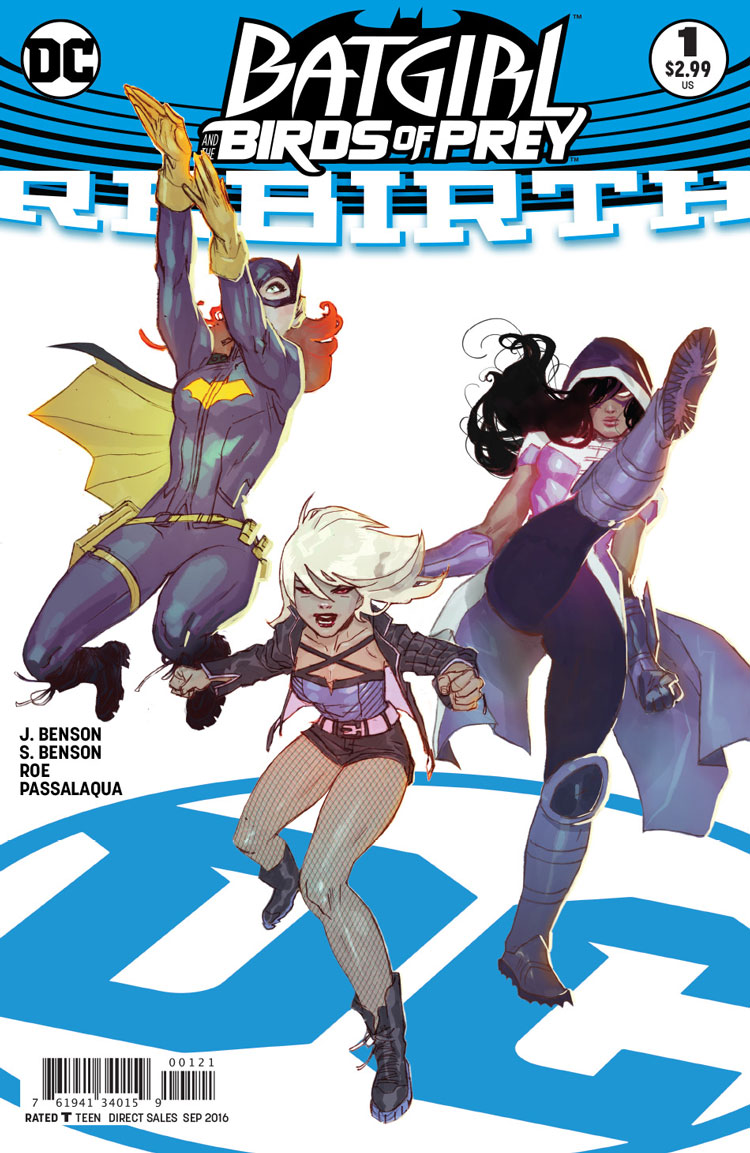 Oracle is back… but it’s NOT Barbara Gordon. As Batgirl looks to her former comrade Black Canary for help to uncover the identity of this new cyber-hacker, there’s another killer on the loose in Gotham. Enter: The Huntress!

I honestly have had a tinge in the back of my head about this series ever since it was announced. On paper, it sounded great. No red flags. Women writers and artist. A return to the trio of friendship we all loved for years under Gail Simone’s pen. A true rebirth of one of the best female-forward concepts DC has ever put together.

But there was still this little nag in my brain.

And now I know why. If this series is a rebirth of anything, it’s a replay on the earliest moments of the New 52, not of anything fans of this title have been clamoring for.

It’s bad enough that writers Julia and Shawna Benson literally retread territory the last creative team spent months digging these characters out of, putting Barbara and Dinah back on the outs. There’s nothing like spending a year seeing a friendship put back together and true partnership evolve for it to be like it never actually happened in a single page.

Like, Babs and Dinah (and Frankie) were LITERALLY hugging a month ago. And now, it’s back to distrust, worry-lines, and darkness between two women readers are begging to have be over it already.

I get creators wanting to come in and make a book their own. But the Bensons here are not getting it, as far as I can tell. Nearly every other Rebirth special is grounded in hope. Hope born of long overdue reunion (sometimes for the very first time). Hope born of a return to something more optimistic and joyful. This issue is dredged in trauma, and snideness between characters whose sole premise is deep and abiding friendship.

And it’s not just the writing. Claire Roe’s pencils feel harsh, as if trying to reveal the most pained expressions each character could possibly make in a given scenario. In some ways, it’s like seeing what happens when you take the joyousness of Babs Tarr’s work and decide to funnel the complete opposite emotion into the page.

Layouts feel perfunctory, without any creative placement as the action builds. To Roe’s credit, I don’t see any of the female characters objectified, which admittedly is a huge step up from past incarnations of this title. But inks are far too heavy for figures to feel like they are actually in motion, and poses seem awkward toward the final confrontations. So much of the book is awash in the darkness of a black bleed gutter, that it’s no wonder the entire story feels like a terrible downer.

And then, there’s the other bit.

Less than six months ago, I wrote on the genuine power and relief of removing the Joker’s sexual assault of Barbara Gordon from The Killing Joke from Batgirl’s definitive origin in Batgirl #49, and wouldn’t you know it, in one full swoop, the Bensons crash it right back in.

Fucking Hawaiian shirt and all.

I do not know what would possess DC and these writers to undo work that isn’t even reprinted in trade collection yet — work that brought new life to a character that was DROWNING in trauma and needed to be free of it at last — but they did. And it’s no testament to these characters or to the fans that have reactivated interest in a book, leaving it in a state deserving of having two ongoing titles (only one of which I’ll be following from here, sadly).

And ultimately, it’s a sad narrative crutch, like pitting these women (god, any women in a book that is meant to be about friendship) against each other to bark and forget everything they’ve been through. It’s the easy way out, and that’s not what this book was ever about.

If DC and the creative team had wanted to really “Rebirth” what fans missed about the Birds of Prey, they wouldn’t have immediately pitted these women against each other. They wouldn’t have dredged the title in visual darkness and character infighting. And they wouldn’t have refocused attention on sexual assault and madman as a defining moment.

In short, they would have done mostly the opposite of what they pushed out here. This is hardly a rebirth of anything except the very book readers full-scale rejected at the start of the New 52. And in a line full of Rebirth specials that have gone well out of their way to recapture the best in DC’s history, it’s sad to see one so focused on reliving the worst.