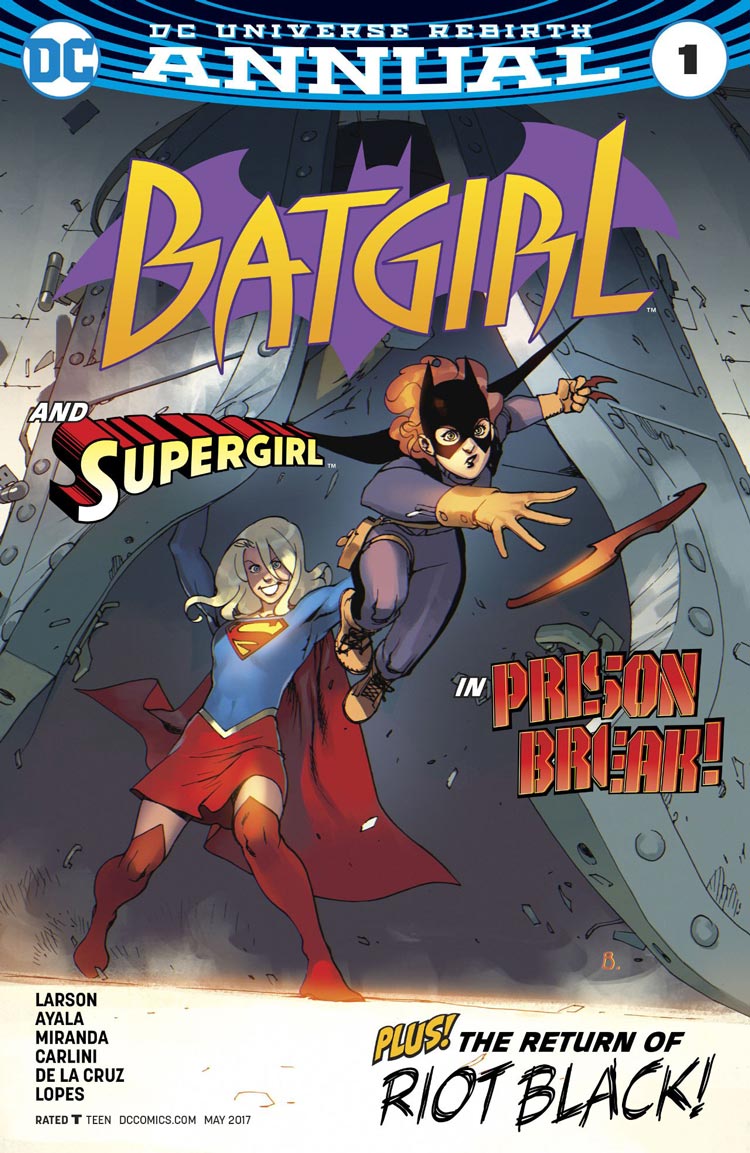 That’s how long it’s been since I’ve seen Kara and Babs teamed up. It was in the pages of Crisis on Infinite Earths #4, mere months before Supergirl would die sacrificing herself and barely two years before Batgirl would have her last adventure in tights until the modern era.

It was sad and poignant, a culmination of decades of fun adventures, some silly, all some of my favorite comics.

So, to get a Batgirl/Supergirl team-up — an Annual that ultimately leads to an extended story with the two in tow — it’s hard not to be a happy camper right now.

Sure, it’s a very different set of characters, both on the younger side, meeting ostensibly for the first time. But writer Hope Larson strikes the right balance between cautious camaraderie and instant rapport. There’s thankfully no mistaken identity, hero vs. hero fight, as reputations clearly precede both young women. But the reticence each has for the team-up (Kara in expecting, Babs for being uncertain of its wisdom) is a clever break from the usual gung ho “this is a team-up” attitude. It speaks volumes about the thoughtfulness and intelligence of each character as portrayed today.

This is, in fact, one of those rare instances where we get a sense of Batgirl being the older of a pair, since most of her companions are college or post-college age. Larson weaves in a little bit of older sister dynamic that actually — given the lack of an Alex Danvers in DC Rebirth continuity — might not be the worst thing to capitalize on long term.

The synchrony of how Batgirl and Supergirl work together is handled well, each bringing their talents in support of the other, not in opposition. But the real expression of this is how artist Inaki Miranda is able to picture that so seamlessly. I’ve long felt Brian Ching (ongoing artist for Supergirl) was bringing a Burnside vibe to the Maid of Might, but Miranda equalizes the heroes so neither feels out of place in the panel, or lesser for not outshining the other.

Because it would very easy to have this glossy, spandex adventure with the girl in a leather suit along for the ride. I’ve seen that in a few other prominent Batgirl guest appearances in recent years. The success here seems to rest a lot on the consistency of facial expression and the relative focus there, leaving the action and costuming somewhat secondary. It’s a great methodology that helps center the drama on personality and compatibility, reuniting two women I’ve so desperately missed seeing share a page for so very long.

(Also, points once again for no upskirts on Supergirl. A brand new era of super-teen to be sure.)

The Annual wraps up with a second story by writer Vita Ayala and artist Eleonora Carlini, detailing a night with Babs’ OTHER best friend, Alysia. It’s such a pleasure to see creators taking Batgirl’s supporting cast seriously and not abandoning characters that have meant so much to fans in recent years. This story is, in fact, a somewhat meta rendition of their on-again, off-again presence, and shows just how fierce Alysia can be.

Never forget, this woman is an activist. And now, more than ever, resistance requires kickass attitude and action. Alysia Yeoh is the hero 2017 needs, and hopefully this story is a return to her ongoing presence, not a farewell.

As I leap into the next few months of Batgirl/Supergirl goodness over in Kara’s title, I’m warmed and intrigued by the start here from Larson and Miranda. It can often be hard to make Annuals matter and equally hard to retread a history that’s been in the drawer for so many years. But some things are meant to be. Kara and Babs — side-by-side in friendship and fighting — is definitely one of them.