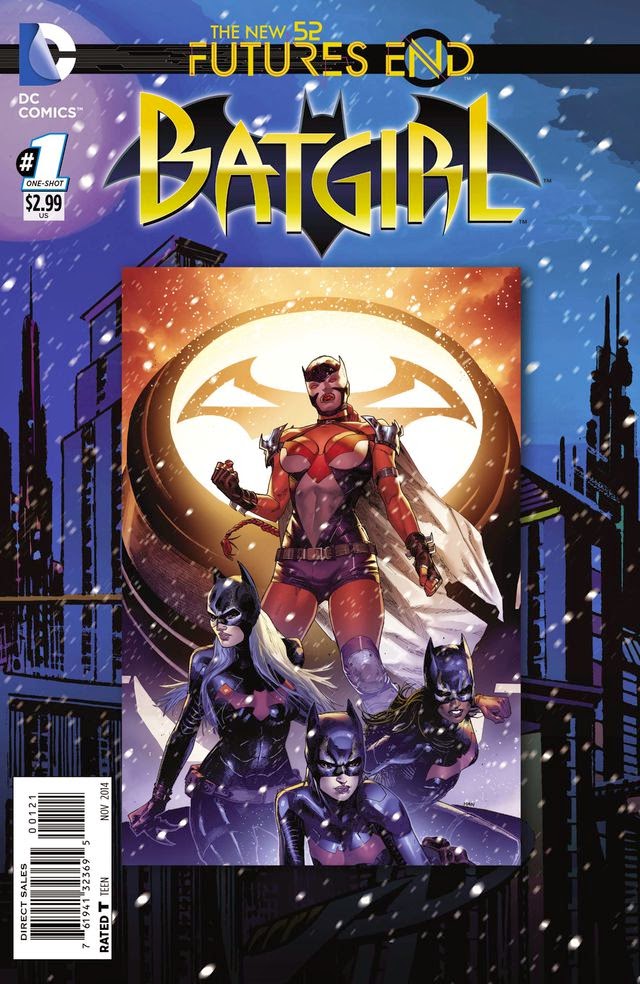 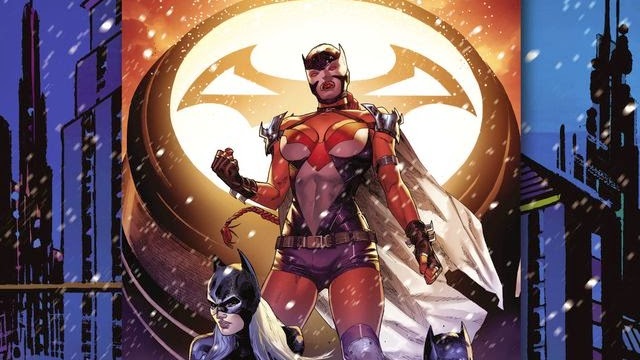 Five years later, everything is different. But some things never change.

Pushed beyond her limit once again — this time on her own wedding day — Barbara Gordon makes a dramatic choice: abandon the role of Batgirl forever. Fortunately, this doesn’t mean the end for her heroism, nor the end of the Batgirl mantle, as a series of infiltrations leads Barbara to an apprenticeship with the Man Who Broke the Bat.

No, not the Joker. Bane. And as Bete Noire rises in Gotham City, so too does the League of Batgirls.

I don’t think it will come as any surprise that I consider Gail Simone’s 35-issue run on Batgirl to be a seminal one for the Dominoed Daredoll (am I still allowed to call Babs that?) and as influential a take as her 66-issue run on Birds of Prey. Barbara Gordon is so many things to so many people, and each subsequent iteration is a tribute to how deeply she can inspire.

With Batgirl: Futures End, we get to see the fruits of that inspiration on the page, as a new generation of Batgirls debut in the New 52, albeit half a decade in its future. Simone reintroduces the most adult and experienced versions of Stephanie Brown and — wait for it — Cassandra Cain to the book, showing us how deeply they are loved by fans by letting us see them through Barbara’s own eyes and words. Even in her focused and maddened state, we still see the analytical, yet compassionate side of the Beast (as Babs is called) in her care of these young women.

It’s a set-up not unfamiliar to Oracle fans, where Barbara enlists her agents in the field to do the public work she no longer can — or wants to — do. It is not physical limitation, but psychological, that hounds Barbara, and it has throughout all of Simone’s run, giving us a heroine who battled limitations and trauma as surely now than she ever had. And in the end, as in the culmination of last arc’s Birds of Prey mini-event, we see a Barbara motivated not by hate, or fear, but love.

And that is Barbara Gordon in a nutshell.

Special note must be made of the third Batgirl introduced in this short story, Tiffany Fox, sister to Batwing and daughter of Wayne Enterprises CEO Lucius Fox. Falling into the family tradition is one thing, but taking on the Batgirl mantle in such a unique way, more intellectual and emotional than physical or violent, fits the Fox name as much as it honors a significant part of who Batgirl is meant to be. And past that, she’s just plain adorable. I mean, really.

Garron and Fajardo make a significant contribution along those lines as well, giving us solid action and gorgeous renderings of all three young women throughout the issue. The treatment of all the masked women, Bete Noire included, is sharp, well-defined, and playful in a way that balances the seriousness of the story with each girl’s inner light. Costumes are beautifully drawn, and whoever decided to color-identify each Batgirl with purple, yellow, or pink variations deserves a medal. It’s a fantastic touch on what could otherwise be boring (three identical costumes) or chaotic (three unique costumes).

The back story of Barbara’s road to Bane’s service is well drawn, as well, although for whatever reason feels more stylized than when handling the masked heroes. Nevertheless, the physicality Garron lends every antagonist, particularly Bane, is neither cartoonish nor slavishly anatomical — giving the reader a book with a fast-paced and dynamic feel.

A fitting conclusion to a stellar run, Batgirl: Futures End #1 is, in essence, a single story that mirrors the entire arc of Barbara’s journey from Batgirl #1 to last month’s #34. It began with trauma, laid out a road to recovery that was harsh and unyielding, and concluded with Barbara exactly where she belongs — surrounded by a loyal family and the self-confidence she needs to be herself at last. I can’t think of a better way to say farewell… and thank you… to another version of Barbara Gordon that will live in my heart forever.