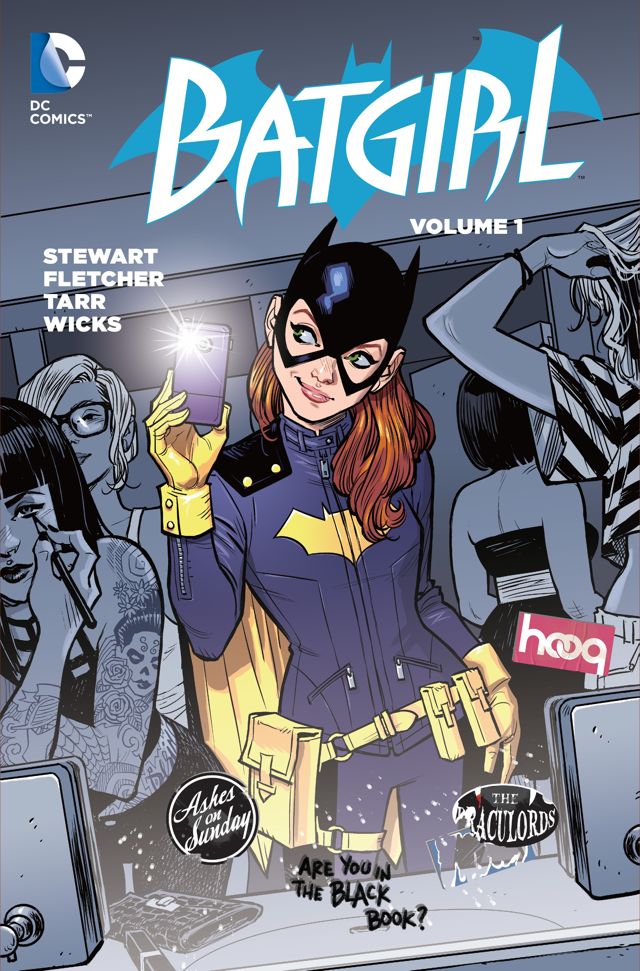 Barbara Gordon wants a new life. She’s moved to the hipster burgh. She’s got a new roommate. She’s starting grad school. All of the drama should be left behind in Gotham. Except when her laptop goes missing and her best friend shows up on her doorstep bringing bad news, it looks like trouble is following Batgirl wherever she goes. The start of a brand new era for the dominoed daredoll, this is going to be the adventure of Batgirl’s life — if she survives it.

At last, the first six issues of the Batgirl of Burnside have been collected (simultaneously in hardcover and trade paperback) into one handy first volume! Heralded by some as the book that launched a new wave of creative reinvigoration across the DC Universe, Batgirl takes the character of Barbara Gordon and gives her almost as much of a different spin as Gail Simone had in moving her from Oracle to the revived Batgirl. In essence, Stewart and Fletcher have made a leap of faith in the Batgirl mythology toward a lighter, more youthful tone, and it paid off in buckets.

From the very start of this volume, it’s clear that the writers are intent on showcasing the full array of Barbara Gordon’s skill set: not just her intellectual prowess and superior physicality, but also the rarely visualized eidetic memory. I actually learned the word “eidetic” by reading Batgirl stories as a kid, so to see this visualization — among quite a few throughout the volume — characterized in such a fascinating manner by penciller Babs Tarr over Cameron Stewart’s layouts, is a real treat for the eyes and the mind. 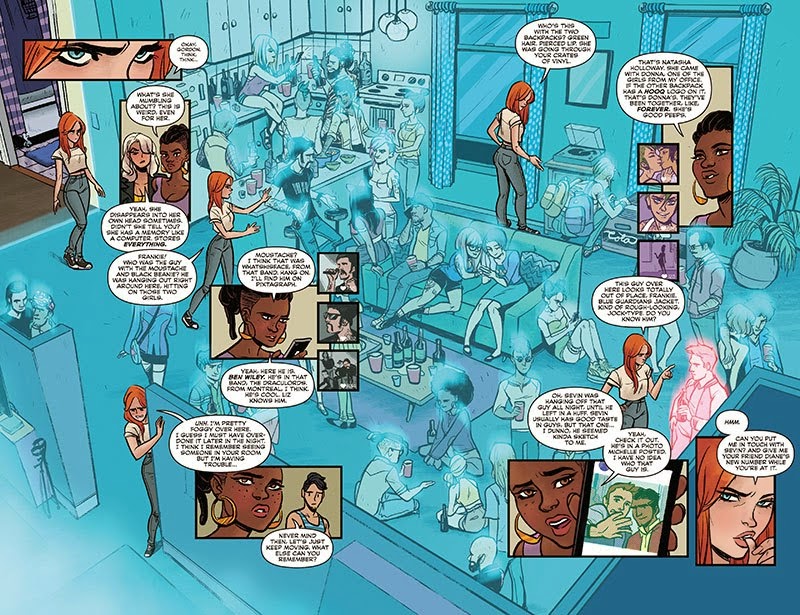 And the fresh take doesn’t stop there. Barbara’s world has been repopulated with a full cast of diverse characters of all ethnicities, sexual orientations, and backgrounds, much as one would expect in a university setting in a major metropolitan city. New roommate Frankie Charles, key player to the through-line of this entire volume, is African-American, bisexual, and experiences a disability. Nadimah, Babs’ research assistant is another favorite right out of the gate, as is Qadir, Batgirl’s own “Q”, who provides a host of new and necessary tech for the hero to get back on her feet with.

Part of the beauty of the story in volume 1 is its insistence on playing by a few more of the rules of reality, and not just in representing the world as more than just white and straight. In the beginning of the story, the need comes about for a replacement Batgirl costume, and that change in the silhouette of the character makes almost as much impact as Stewart and Fletcher’s storytelling chops. Armed now with a functional leather jacket, combat boots, detachable cape, and 3D molded cowl, Barbara Gordon is the cosplayer’s dream — a woman who one could believe is out fighting crime on a budget without losing any style in the process.

With character sketches and costume design notes filling out the back matter of the volume, it’s clear that this revision of the look of Batgirl’s world was a source of careful consideration and an enormous amount of time and energy. With new corporate logos specifically designed for hipster-like products peppering the pages, and a whole host of social media queues throughout the volume, the story vibrates with a feeling of today’s energy while taking that social space seriously.

There’s a bit of meta-commentary on today’s caustic culture toward woman online with at least one or two of the villain choices, some of which is purposefully over the top. Riot Black blackmails women with personal information (huh. Sounds familiar.) until Batgirl gives him a swift kick in the ball sac. For real. And as silly as that sounds, it’s a moment worth cheering. Because throughout, and despite her self-doubt and floundering relationship with her very best friend, Batgirl really does stand for what’s right. So much so that the villain at the heart of the book becomes all the scarier for it. 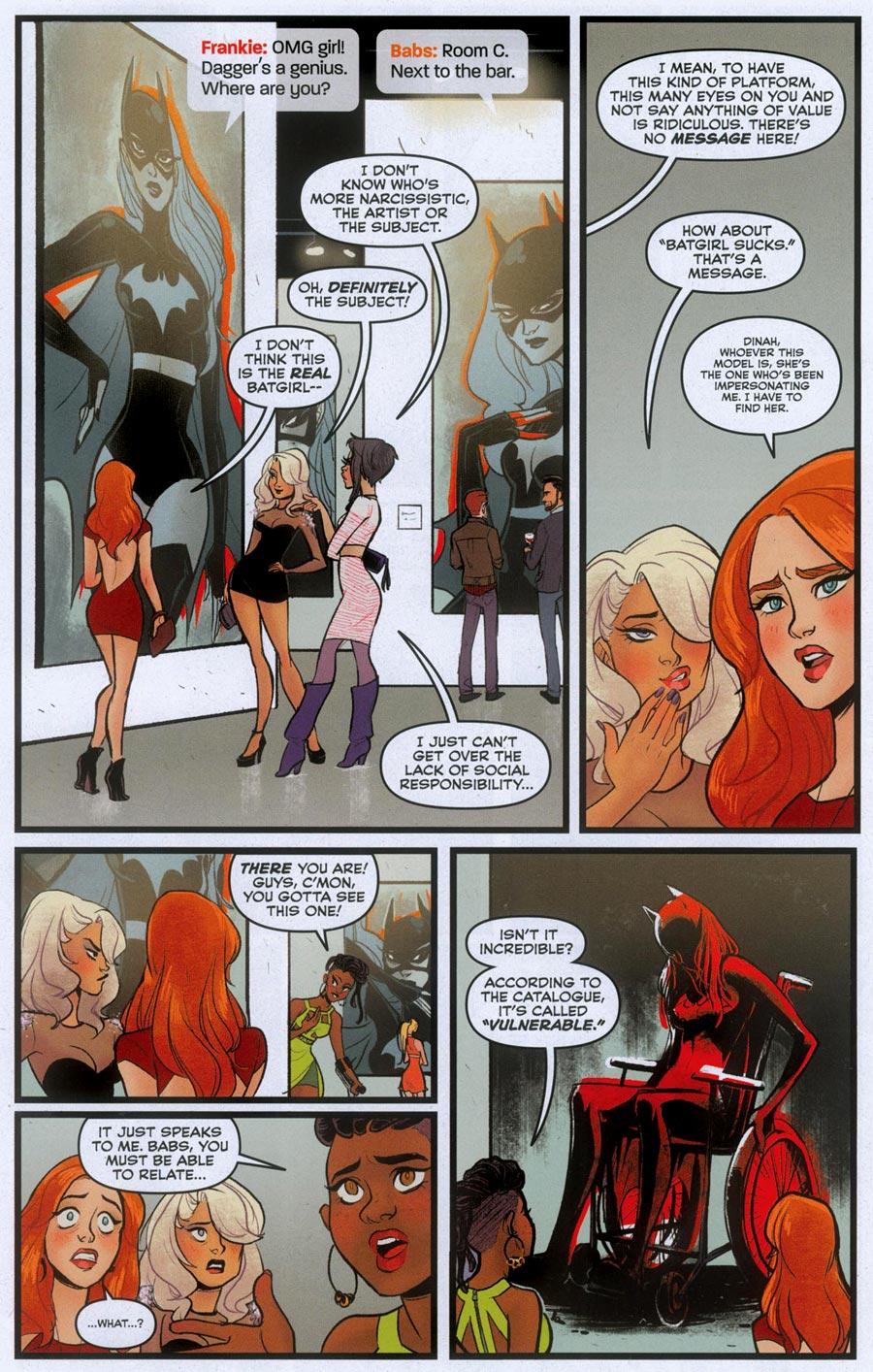 This volume also contains the more controversial chapter involving Dagger Type, a cross-dressing performance artist and would-be antagonist. It’s clear the creative team took the criticism to heart regarding his portrayal, as a goodly portion of dialogue in that issue has been tweaked, clarified, or entirely rewritten. Gone are a number of the more gendered exclamations, the outbursts of shock, and one particular line that I think went a long way toward connecting some unfortunate dots.

It will be up to newer readers to determine if that revision is successful, but as was the case with their heartfelt and honest apology in the face of anger, sadness, and disappointment, it’s clear they want to make amends. And not taking half-measures, the creative team is highlighting carry-over cast member (and trans friend) Alysia Yeoh in a new storyline beginning in July, running through Batgirl until October — something I imagine rose directly out of this experience interacting with the fans.

Tarr and Wicks of course will also be carrying on to the next story arc, but what we get in this volume is a beautiful progression of high energy, expressively rendered work that speaks to the freshness the artists are all bringing to the table. Tarr earned an Eisner nomination, in fact, for this storyline, and it’s no wonder. With as much expression in Barbara’s life outside of the costume as in, the work here just radiates every emotion: from joy to disappointment, frustration to relief, all wrapped up in a package of sheer grit and drive.

This is Batgirl in a nutshell. Batgirl of Burnside takes the mythos of Barbara Gordon and expands it even further, giving rise to a new chapter in her history. Never before has it been so obvious that Batgirl stands alongside Superman, Batman, and Wonder Woman as one of DC’s premier heroes, not simply by virtue of her prowess, but because of the flexibility of her mythology. Barbara has been many things to many people. Now, she’s even more.