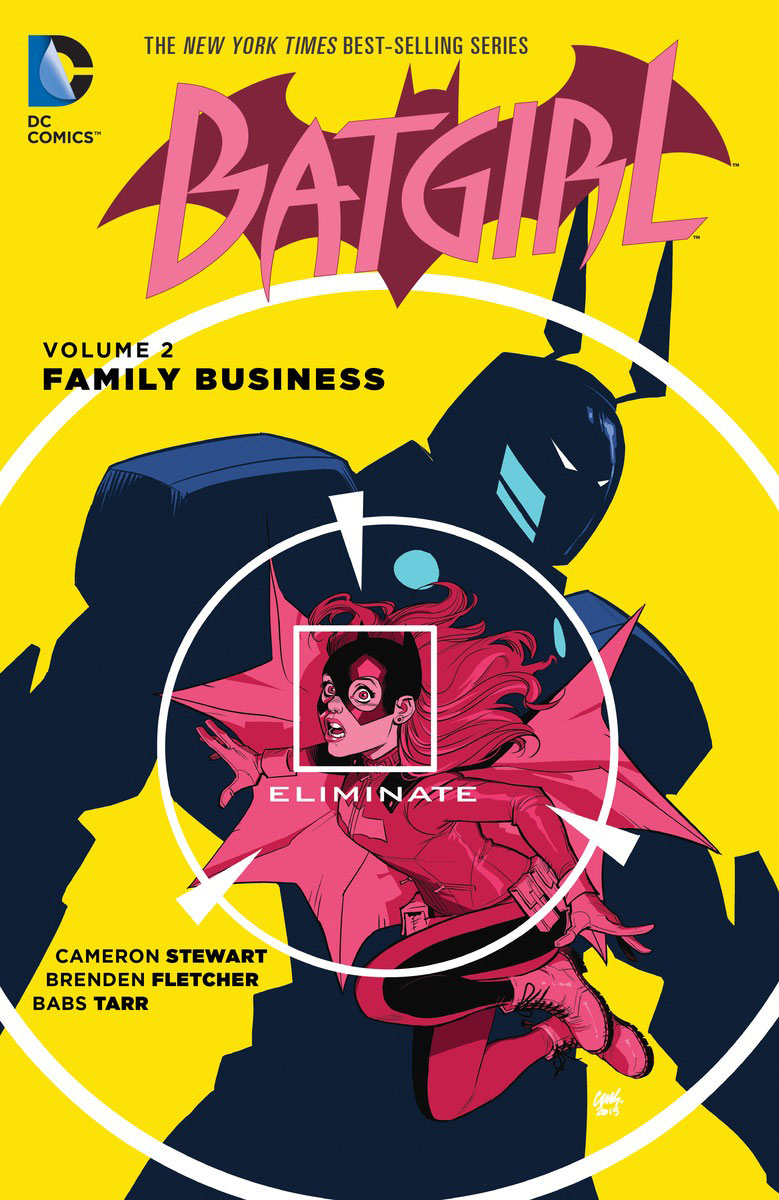 Batgirl’s new adventures continue in this second volume as Babs settles into her new digs in Burnside surrounded by new friends and family — just in time for old family and friends to come knocking. It’s a clash of worlds as Batgirl kicks ass and takes names amid the looming threats of Live Wire, the Velvet Tiger, and Gladius!

It’s amazing how much of this run, crafted mightily by creators Cameron Stewart, Brenden Fletcher, and Babs Tarr, is about family. Yeah, of course it’s right in the title this volume, but it’s not as simple as Batgirl coming to grips with her father, the former police commissioner, becoming a bat-vigilante. It’s a part of the throughline of the book as a whole, stretching back through volume 1’s “Batgirl of Burnside” story and into the upcoming volume 3 still hitting shelves in monthly issues.

Batgirl is about pulling family toward you — sometimes too tightly, sometimes with a a guarded arms length — and being built up by it. 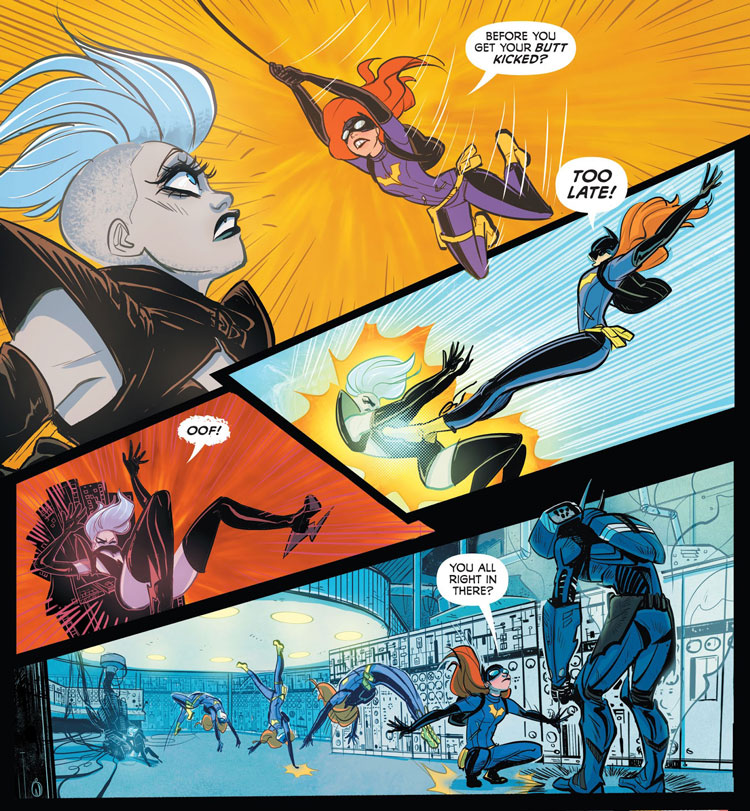 Case in point, Fletcher and Stewart take us on a whirlwind tour of Batgirl’s entire extended cast in this volume, from her father to the other women to wear (in current, past, or hopeful continuity) the Bat who sprung from her metatextual inspiration. Batwoman, the Matron, Olive and Maps, the Spoiler, even Frankie herself — all swirl around the center of this book as if to honor (and complicate) the life of Barbara Gordon.

But we also get to see the men in her life divided between camps regarding Batgirl’s own future, with nervous father doubling as Batman/ultimate authority figure and Dick Grayson bringing up the rear with his own expectations and limitations he wants to put on Babs. It’s an interesting contrast to new cast member Luke Fox, who’s had his own travels with parental disapproval, and helpful pseudo-teammate Qadir, who continues to lend his unerring support to both Batgirl and Frankie in her new role as Oracle.

And then we have the villains. All three women, all three determined to establish ownership of their own lives — whether in the control of their corporeal form, advancement of their financial success, or control of the world as a whole. All harsh mirrors to Babs’ own need to get out from under and forge her own path. Because if Volume 1 was about Batgirl getting out of her own way to be happy, Volume 2 is about making sure everyone else plays along too.

All three of these conglomerations — the determined Bat-women, the authoritative men, and the misguided, but single-minded villains — visualize this struggle in different ways. And all three combined make for an adventure book that is as fun to dissect intellectually as it is to digest visually. 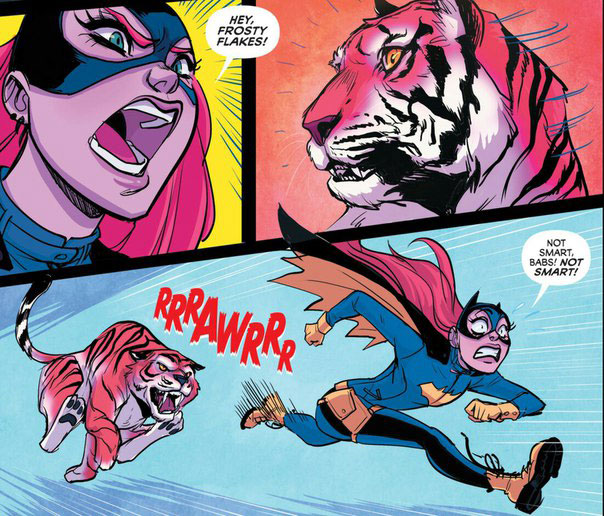 With the move from Volume 1’s layouts by Stewart and pencils by Tarr to having the latter handle both duties, Volume 2 has a slightly different feel, but one that largely feels more relaxed and unique for this corner of the Bat-universe. Tarr takes a greater focus on facial expression and how bodies interact in interpersonal, non-violent ways than we’ve seen in previous chapters. It doesn’t have Stewart’s exemplary flair for action, but what the book loses in dynamism there, it gains back in the spirit of line and a color palette by Serge Lapointe that makes every movement radiate off the page.

Tarr and Lapointe are creating this delightful candy-flavored world for Batgirl, where even the darkest moments (particularly her interactions with Batman) are aglow with life by design. Tarr’s handling of the live tigers in the second chapter is absolutely breathtaking, and where she takes their movement — and Batgirl’s — on the page is a total treat to the eyes. Her designs, too, for both Live Wire and old school Batgirl villain Velvet Tiger are wonderfully inspired and reflect the fashion-forward sense this book has maintained since her very first issue.

But by the time the music died down, and it’s time for a villain-free chapter (featuring a gorgeous wedding between transgender and bisexual Alysia and her new bisexual spouse Jo), we get to see the real goods from Tarr and Lapointe. 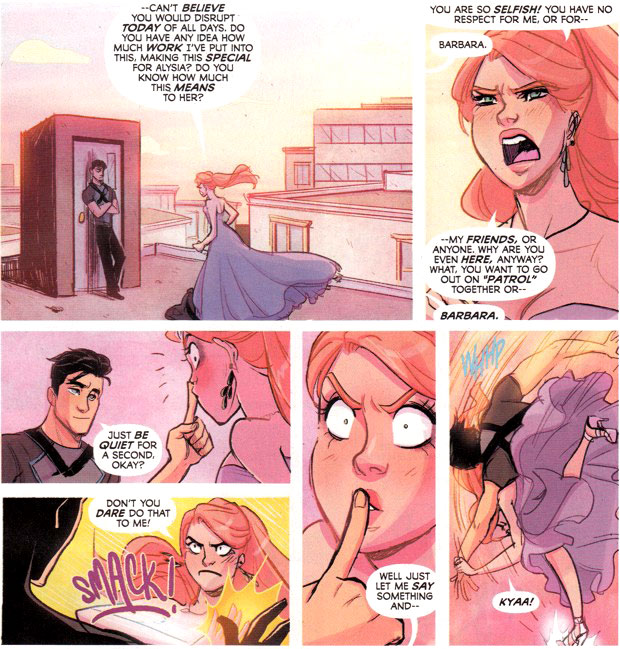 I’ll admit, I’m a longtime sucker for wedding issues, with Donna Troy’s still remaining one of my all-time favorite single issues. And Fletcher, Stewart, Tarr, and Lapointe do not disappoint, delivering not only a beautiful MOMENTOUS moment in a year where same sex marriage became the law of the land, but also giving us moments of Barbara Gordon’s adulthood that felt authentic and raw.

Her rebuke of longtime flame Dick Grayson and her rationale why felt so real and acknowledged his faults (and maybe some of her own) how honest, healthy adults should. Between dialogue that it like a metaphoric slap to linework that expressed just how challenging this interaction can be between two people who do indeed love each other, the final chapter of the volume spoke like none other as to the power of being your own person and knowing what’s best for you. And doing something about it.

Cathartic and exhilarating, Batgirl Volume 2 really does handle the family business in a way that keeps focus on Barbara but lets all of us see her hard work (of transition from one era of her life to another) so clearly. It’s fun, honest, clever, and beautiful in a way few super-hero books get to be. But ultimately, it’s always been Batgirl’s job to stand above — to inspire, to fight hard, and to do it all with a smile. This time, she’s just doing it for herself as well.