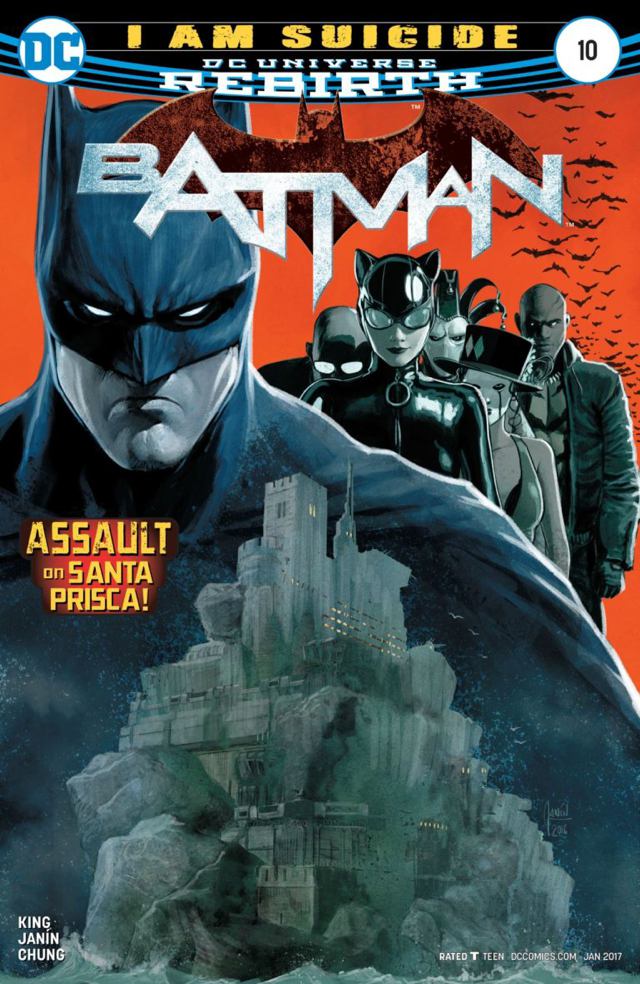 Batman is focused. Batman is determined. “I Am Suicide” could very well be King’s landmark time with his run on The Dark Knight thus far.

The second chapter of the new arc jumps immediately into the action, with no flashbacks to Batman and his “Suicide Squad” planning on assaulting Bane’s seaside fortress of Santa Prisca. It reads like a rush, only coming up for air when it needs to and not waiting for the audience to understand what Batman has in store with his plan of attack. Suffice it to say…he plays his cards very close to the spinal cord. King gives us a very minimalist Batman in these pages, the caption boxes that are sprinkled throughout the issue don’t belong to him and tell a story all their own. King is working double time here! Delving into the heart and mind of a character that’s only seen on the last page of this very issue to layer seeds for her future time with Bats all the while Batman does the heavy lifting and plays it safe attempting to get closer to Bane and his goal: Get Psycho Pirate and return Home.

The big players of the arc meet each other and keeping in line with the issue, it’s a savage meeting of brawn that ends with Bruce looking down and out of the fight for good. I gotta say, Batman can convincingly play the “half-cocked leader” because the very idea of meeting Bane again (after what famously happened all those years ago) seems well…suicidal. Projecting that Bruce has a one track mind in front of his foe is great planning and by the end it’s unsure this plan of his will fully work because the mission isn’t done but everything seems “purrfectly” on schedule.

The caption boxes that tell a story all their own, speak to last issue’s shocker of a reveal for Selina Kyle. We’re given a tale of love lost, death, and revenge in a way that’s poetic and makes me wish this could’ve hit the nail harder as it’s own backup story. The writing for Catwoman has been elevated and Rebirth is already giving a new spin on the longtime ally and enemy of Batman. King paints Kyle as revengeful but with reasoning and motive you can’t exactly shun her for doing. In her mind, her death count is warranted and rightly so, she grew up on the opposite side of the tracks despite being right near Bruce…she’s had it worse for wear and this is her “doing the right thing” so to speak.

If the Catwoman tale is King telling, his Batman is showing in full form.

Batman is in great hands with Janin and Chung on art. The full use of the color spectrum is on display all over this issue. From the cool colors of a prison with slowly rising water, to a bombastic opening salvo of explosions and punches. The visuals set this book apart from most titles on the stand. The photo realistic style that Janin utilizes is good for handling large amounts of bodies and body anatomy becomes important and key in a highlight scene that is peak Batman in all of his glory. Bane is drawn and colored as a force of nature, muscular, toned, and yet…it’s a blink and you’ll miss it hint of sadness in his eyes because he isn’t what he once was, his frame and figure is absolutely daunting under this art team. Not to outdo themselves by much, they continue by trekking and mapping out Bruce’s quick time escape effort. The way the art carries us from Point A to Point B is magnificent and it does wonder for the story because we’re not informed of the entirety of Batman’s plan, in one scene it’s not clear what he’s trying to do right up until he does it but it’ll make you go: “Damn! THIS is Batman!”

The issue rounds itself out with the next phase of the assault about to go underway and if Batman and his scowl is any indication, Bane has trouble coming for him and his damn back.

This chapter is another step in the right direction for not only “I Am Suicide” but defining and separating King’s run on Batman from what came before. He’s a man not afraid to reach out for help when he seems out of his depth and not afraid to play it both smart and dangerous at the same time. Batman has always played it too close to call but the danger and stakes are being elevated as time passes and it’ll be a treat to see what happens to the Caped Crusader and his Suicide Squad next issue.