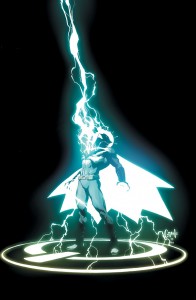 The month before Batman #0, Scott Snyder turns in what could be called Harper Row #0. Finally formally introducing Harper after her appearing as early as issue 1, Snyder has created another dynamic and interesting cast member. In a time when costumed hero books are berated for the lack of new characters, Snyder has made his run entirely about adding to the Batman mythos. The Court of Owls, Harper and her brother Cullen, and Gotham’s secret history have been cornerstones of his work.

Snyder’s writing is top notch, as usual. Harper and Cullen are well developed and have a logical way to fit into Batman’s world. With echos of Tim Drake, Harper finds Batman by being smart enough to put the pieces together.

Becky Cloonan and Andy Clarke fill in for Capullo on this issue and at first I was unsure of the radical difference in styles. But it works. Rather than choose an artist who would make the style less jarring, the choice of Cloonan makes the reader keenly aware that this isn’t really Batman’s story, it is Harper’s. We have already had our epilogue to Night of the Owls, this is something different.

This is a near perfect issue. I’m only deducting points for the final few pages by Andy Clarke as I think two artists could have been more carefully integrated.

Engaging new characters, good dialogue, solid action, and bold narrative choices. Welcome to the Bat Family, Harper Row, you have a great future ahead of you.