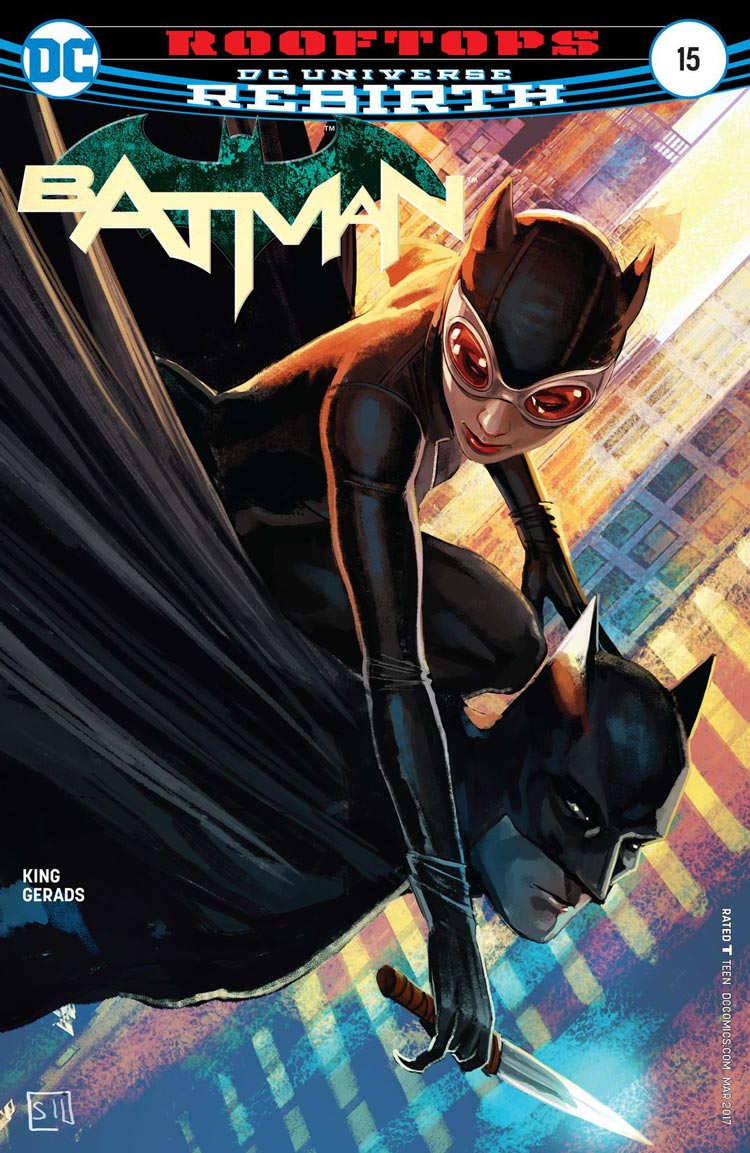 It’s the morning after Catwoman’s promised last night of freedom, and not surprisingly, Selina is not ready to be caged after all. But amid the chase, Batman discovers the truth behind the 237 deaths that are meant to send the love of his life to Blackgate Prison. And the result is a poetic end to one of the most romantic stories of our time: The Bat and the Cat.

There are two types of Bat-Cat fans, near as I can tell. There are those who unequivocally believe that Batman and Catwoman belong together and nothing and no one should ever come between them.

And then there are those of us who absolutely believe the Bat and Cat are made for each other — and it’s in the impossibility of that pairing, the constant attraction and repulsion, that true romance is born.

These characters, the Bruce Wayne and Selina Kyle of the modern DC Universe, are not made for marriage. They aren’t made for partnership. They aren’t even made for the kind of compromise that comes with irregular relations.

But they are made for love, and the kind of deeply poetic (and tragic) dance that Tom King and Mitch Gerads so adeptly pattern across these 20 pages. As an individual issue, in fact, Batman #15 may be in the running for 2017’s best single story, much like their collaboration in Sheriff of Babylon #5 was my last year’s pick. The fluidity and picture perfect motion of the narrative, matched with a glourious art style that jumps eras, packages the magnificence and loss of the Bat and Cat’s love so perfectly.

Like all star-crossed lovers, theirs is a story that transmits over the ages, through different visions of their beginnings in fact. So mythologically dramatic is their relationship that even the two of them recall different origins for their first meeting. It’s a moment of fairy tale whimsy that could easily feel gratuitous or lead hardcore fans down a spiral of continuity madness, but for me, it speaks simply to recognizing the iconic nature of this relationship. It is owed as many stories for its beginning as we have for the love story between the sun and the moon. And ultimately, as Catwoman alludes, it’s their inverse nature that makes their love impossible, even as it is at its most alluring.

In every way that previous representations of the more physical nature of the Bat and Cat’s relationship went wrong, Gerads manages to make these scenes simultaneously poetic and rather banal. It’s actually of note that the real sexiness occurs after the zip-up and after the cowl is replaced, and figures free fall over and over into each other’s arms. Oddly enough, my strongest reaction occurs not on a naked rooftop or in fight mode, but in a very simple set of panels with Selina sitting next to a wounded Bruce in bed, sipping coffee. It’s an impossibly domestic scene that teases the very thing that first set of Bat-Cat fans want, and we in the second set know is a fleeting moment to be cherished above all others.

To say the Cat is Batman’s weakness is simply to give up too much of Bruce’s agency, but what’s clear is that no matter how much Selina may love the Bat — and know him, truly know him — she knows herself just as well. And I’m not sure that clarity has ever been leveled at Bruce Wayne effectively. King and Gerads package that disconnect so clearly here by the end. And we’re left exhilarated, saddened, wanting, and nodding in understanding. Because it couldn’t end any other way.

A brilliant wrap-up to King’s first masterful story on Batman, as well as a beautiful ballet all its own, Batman #15 is this year’s first can’t miss comic book. Give in to love and read it a few times. You’ll never look at the Bat and the Cat the same again.