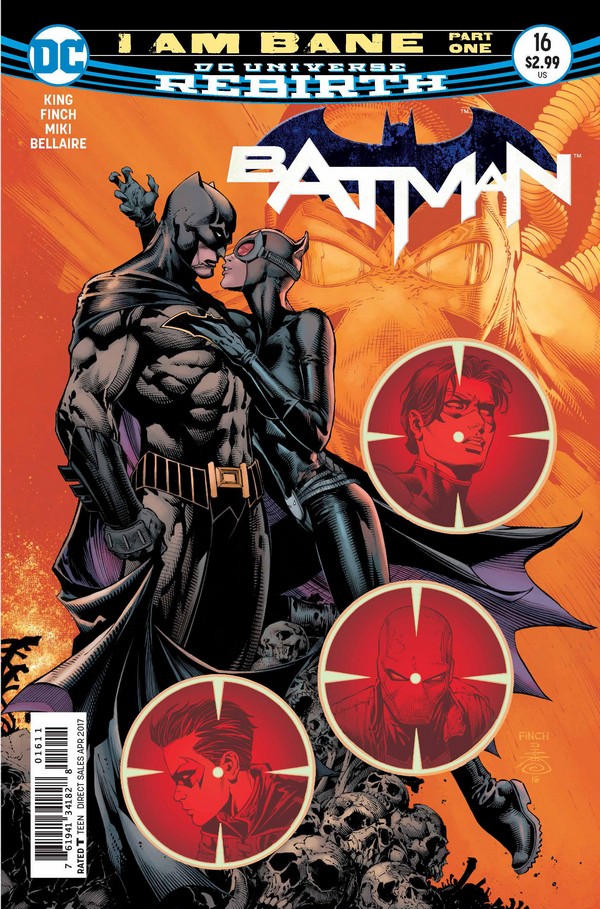 Not gonna lie, I came into this issue more than a bit pumped about this storyline. King made it very obvious in the “I Am Suicide” arc that he gets the Bane/Bat dynamic and that this villain is not going to be a pushover in this run. Sure, maybe he never has been, but this is going to be an intense reunion and King makes it obvious in this issue that the Bat is shaken. There’s a time clock, with Gotham Girl’s rehabilitation on the line. Can the Bat-family withstand the machinations of Bane for long enough to save her?

The pacing of this issue is great, with a diner scene that shows the “brotherly” love of the Robins and the graveness of the situation regarding Bane. King’s voice for Bruce in this issue is that of a King who knows he’s got one hell of a force coming to his castle, but he has no choice but to attempt to defend it and reduce casualties. He doesn’t know which side it’ll come from or when, but it is coming and he is on the defense. The cliffhanger launches this arc into overdrive and there is no question that an all out brawl is coming and there’s going to be no holds barred.

Where I find the issue to be lacking is David Finch’s pencil work. The diner scene, in particular, lacks any kind of human emotion and Dick, Jason and Damian look so freakily similar that there’s next to no character definition in the artwork. In fact, there is little to nothing separating their appearance from a security guard at the beginning of the story, let alone capturing their personalities. This lack of definition/range of emotion applies to Bruce as well, his face permanently in the exact same expressionless scowl that does not even represent his tension very well and never deviates. The facial work throughout the issue is like watching an actor that has had so much plastic surgery that their face is no longer capable of showing the full range of human emotion, which strips much of the tension – and camaraderie where the Robins are concerned – from the story. Finch provides one “mode” for the characters and never deviates, and after reading an arc by Mikel Janin and two issues penciled by Mitch Gerads, it just doesn’t hold up. The panels with Catwoman are stiff and stoic, a far cry from the emotion-packed work readers witnessed in the past two issues, and overall the visuals in this comic felt like stop motion screencaps of action figures. Any semblance of the psychological aspects of this oncoming threat is nowhere to be found.

Jordie Bellaire’s colour work is rock solid from start to finish, especially in the panels where the Bat signal is in play. The mood set on the rooftop makes up somewhat for Finch’s stiff character work, softening some of the edges found in the pencils. She is indisputably one of the best colourists in comics.

Batman #16 kicks off what will hopefully be an entertaining story with a powerhouse villain that is definitely more than a bruiser. There are serious mind games at play here, and that’s where this comic becomes split. King is a master of subtlety and mental manipulation, but the pencils are not playing at that level. As the action intensifies and Bruce & company spend more time in costume hopefully the pencils will move closer to the quality of the writing and colour work.