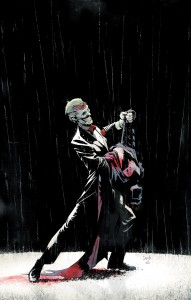 Unlike almost any other hero/villain pairing in superhero comics, the struggle between Batman and the Joker is more of a debate than a fight. While most villains are driven by greed or madness, rage or desire, the Joker’s only real desire is to prove Batman wrong.1

Fittingly, then, for all the showmanship, the ruses, the elaborate traps, and the chemical surprises, the finale of Death of the Family comes down to who who gets the last word in the argument over whether it’s the Batman or the Joker who has looked more deeply into the other’s soul.

What makes Batman #17 such a satisfying conclusion to a storyline that must be ranked as one of the high points of Batman’s modern history is that Scott Snyder recognizes that the last word is not the same as the last laugh.

The only debate at this point might be over which image from the past four issues stands out as the sheerest, most indelible horror. Is it the shadowy figure of laughing death who saunters into the blacked out Gotham City Police Department? The first glimpse of the Joker’s new face reflected in the black of Alfred’s pupil? Jim Gordon, hunched in Batman’s arms, bleeding from every pore? The Joker’s pinhole stare directly at the reader on the first page of Batman #15? The living human tapestry? Or is it simply the way the Joker’s severed face continued to rot and peel away as the story continued?

The only way to possibly come to an answer is to read, and re-read, to pore over every word and every magnificent line. And maybe even to buy the inevitable trade collection, just to have something to highlight and annotate, to tear out pages for framing, and to go over with tracing paper. To press into new hands and say, “You simply must read this. If you’ve ever loved the Batman on film or TV, or seen a cartoon, or owned a toy, or read a single solitary comic book from any point in his more than 70 years of publication, you must read this.”

And then go buy another. To ask for it back would simply be cruel.

1. I am, of course, discounting the times that the Joker has been written as simply a garish thief. These stories can be good fun — and I’m completely in favor of good fun — but I think we can discount Joker the jewel thief for the purposes of this review.