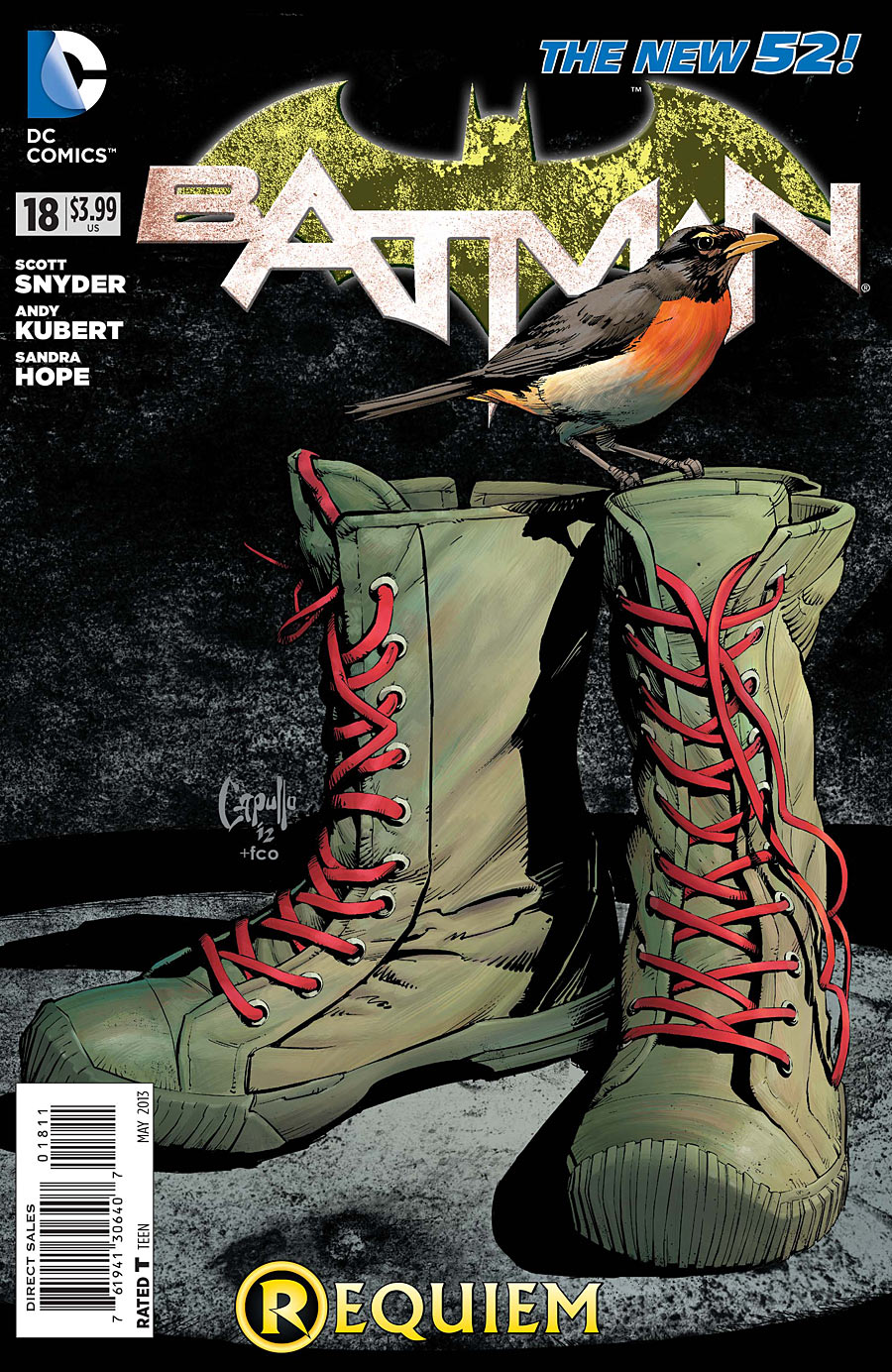 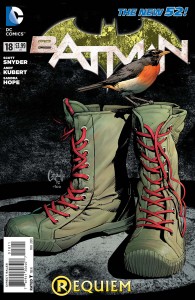 In the aftermath of the death of Damian Wayne in Batman Incorporated #8, the Dark Knight is lashing out at the enemies of his city, and it has at least one onlooker concerned at the state of Batman’s psyche. Harper Row returns to the pages of Batman, determined to get her idol back on track. But he isn’t going to make it easy…

Snyder shifts focus once again, as in issue #12, giving us a Batman story strictly from Harper’s point of view. It’s a stark difference after last issue, where Bruce is personable and confident, and not simply because of the devastating events which have occurred within the weeks since #17. Snyder portrays a much more opaque Batman when rendered from Harper’s perspective, an elevated figure who functions more as demigod than man. It’s a stark difference that harkens back to portrayals of Batman pre-Snyder and only serves to illuminate just how deeply human his Bruce is under normal circumstances. Nevertheless, from Harper’s point of view, he is THE Batman, and that’s how she wants it, curiously. Unlike Tim Drake’s desire to deduce Bruce’s identity (or in New 52 continuity, Dick’s desire for the same) in the wake of Jason Todd’s death, Harper wants no such thing, and in fact, knows nothing of Damian’s death — making the conclusion to the postscript, co-written with James Tynion IV, all the more heart-wrenching. It is moments of magic like this that could lead to Batman moving on, and while we know it won’t be swiftly accomplished, there is a light out there in the darkness (no pun intended).

I am also most appreciative of the opportunity for more information on Harper and Cullen’s past and current circumstances, particularly as Batman #12 was inarguably my top single issue story of 2012. Snyder hasn’t been exceptionally forthcoming with their history on the page, but what little is teased, both in the interaction between the kids and their father, and Harper’s subsequent discussion with Batman, more than has me hooked. And once again, to see Harper standing up for and taking care of her younger brother, a young gay man, in the pages of DC Comics’ top-selling title, is exceedingly heartwarming.

Kubert’s illustration is well done, and a natural fill-in for similarly styled art by series regular Greg Capullo, but it doesn’t quite match the latter’s quality or sheer nervous elegance. For scenes of such random force, however, as Batman rips across Gotham in a grief-fueled rage, Kubert’s sharper angles and more open rendering does fit surprisingly well to the tone. Where it seems to fall short is in more personal moments involving Harper and her brother Cullen, that would have benefited from more pages by Alex Maleev, who handled the back-up tale (truly just a continuation of the main story) with elegant and dark beauty. His Harper, like his Scarlet, is a true representation of the time in which she lives and the world from which she was grown — disheveled, but confident, tough, but with a clear warmth about her face and eyes.

It may be a story we’ve seen shades of before, but for this particular Batman and his (potential) future confidant, it feels like a tale that deserves revisiting. Here’s hoping there’s more Harper Row coming to these pages in the near future. No one can replace Damian (or Tim, or Jason, or Dick), but the opportunity to watch her and her brother develop further is a path well worth following.