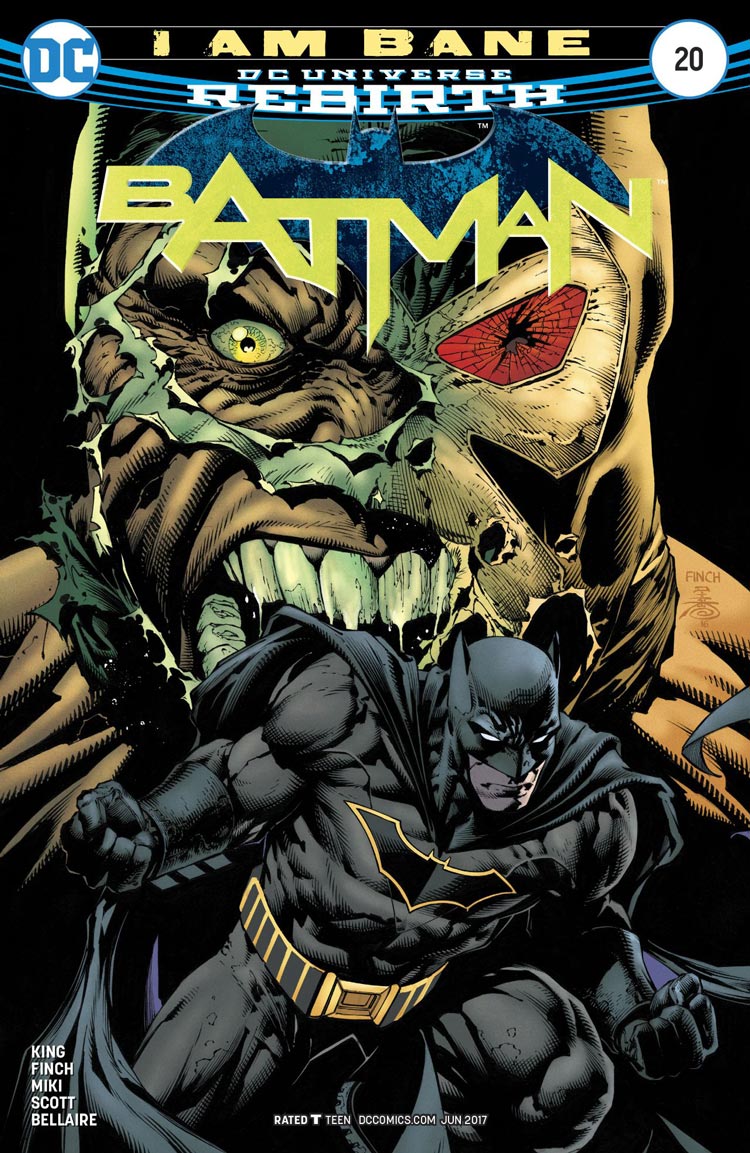 Bane finally reaches his destination: Batman. And he will not rest until he has the Psycho Pirate back in his hands — and all of Batman’s allies are ground under his boot in punishment.

He is Bane. But the problem is this: he’s forgotten that this is Batman.

Since Tom King’s first issue, we’ve seen a Batman whose mortality is much more in play than with previous writers. The idea of his death — from the airplane incident to Bane’s backbreaking — always hovering just over his shoulder, waiting like a specter to take him away.

It’s not a new concept, this obsession with death. One could argue that Batman’s entire existence is tied irredeemably with death, and with the untenable mission he set out for himself at the young age of ten. He’s orphaned from his parents, but also orphaned from life, now held in the care of a looming death he hurdles himself toward, fighting an unwinnable battle that can only ever end one way.

That’s the theory anyway. And for the most part, I believe it. But King does something rather clever amid a 20 page brutal beat down, rendered admirably in David Finch’s intense line on built-up musculatures. It’s all an over-complication, fraught with the type of details and complexities fans and psychologists love to pick apart for hours on end.

It’s so much simpler than that. As simple as two men fighting each other for dominance. As simple as summing up everything about yourself in a three word phrase and have it still resonate with deep meaning.

He does it all because it’s the right thing to do.

Night after night, year after year, Batman fights as he fights because it is right. Because people need help. Today it was Claire.

Make no mistake, the MacGuffin of it all — Gotham Girl’s potential to be the unstoppable force for Gotham’s protection that a very human Batman can never quite be — is fascinating. And Finch relays that humanity in very brutal and bloody terms on every single page, as he renders Batman’s torture at the hands of an almost equally devastated Bane. You can feel the physical stress, even as the narrator’s lyrical voice calls to Batman.

But it’s clear by the end that this is not the voice that drives Batman to continue on. There is no relenting or slipping softly into the embrace of a rest well earned. There’s simply no physical sign of it. Clue #1 that if you believe Batman is all about death, well, maybe you’ve missed the point.

“I Am Bane” (not to mention “I Am Gotham” and “I Am Suicide”) continues to impress, if only because King manages to seduce me every time into thinking one thing, and being flabbergasted at my own naiveté by the end. Batman #20 is only the latest in that pattern, and I sincerely doubt it will be the last.