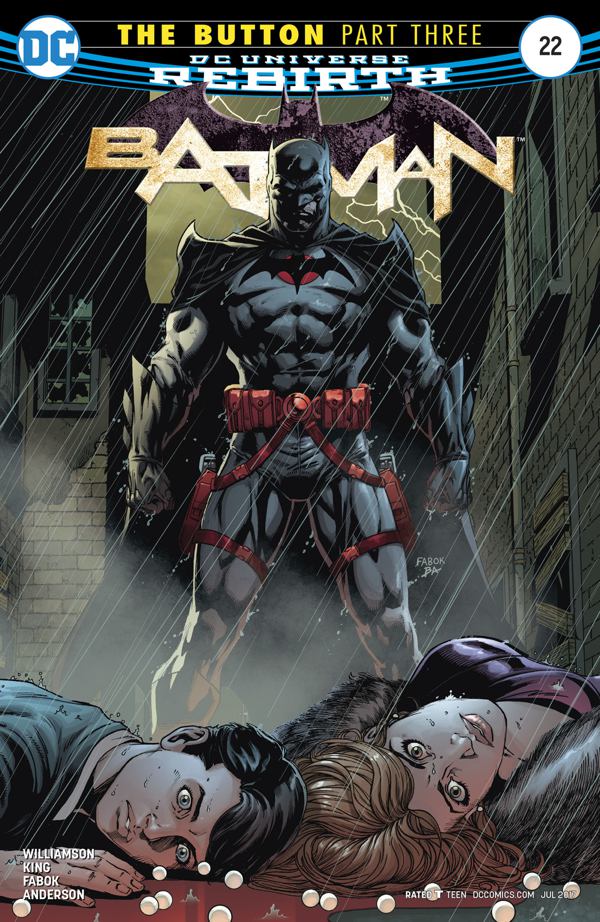 STOP! If you haven’t read any of “The Button” story line in DC you need to first read parts 1 and 2. Although there are not any spoilers, per se, for part 3 some things mentioned will allude to events that have already happened in the previous parts.

I’m not crying. You’re crying. The greatest gift has been given to both readers and Bruce and Thomas Wayne alike. In what will be later remembered as one of the greatest Batman moments in history, and teased in the last issue, father and son meet. It’s a heart-wrenching issue that continues Bruce and Barry’s investigation into the button as they try to figure out what all the clues mean.

Joshua Williamson and Tom King have given us a key moment in the Batman’s story and the outcome has the potential to change him forever. Williamson and King handled all this emotion masterfully as both Batmen are depicted having the type of reaction only they could and should have. On the first pass, the reader may feel overwhelmed by their own emotions of the event and not understand Bruce’s reaction. Being reunited with a long lost parent would bring most men to sobbing tears.

You need to remember, however, that it’s Batman. Even when presented with this dream fulfilling moment, Williamson and King keep him true to who he is. The moment is not lost to Bruce, as the reader can feel his numbness from the shock of the meeting and fights to hold himself together. They have given us such excellent work on the characters. This is a very Thomas Wayne-centric issue and gives us a deep dive into who and why he is. In turn we are able to learn more about who Bruce Wayne is.

There are lots of very awesome moments in this issue that I will not spoil here but the reader will see a shocking request from Thomas that could change the DC Universe. It was another heart wrenching moment and scripted so well. The change from Tom King to Josh Williamson seems to have been the right choice. It is beautifully written and much more heartfelt than Batman #21. This issue still has not given us any answers to the bigger question of who is controlling the DC Universe — but with a surprise ending, it alludes to a final answer in the final part.

Again, we have Jason Fabok doing fabulous work. Batman #21 was nothing short of excellent and he has continued this into issue #22. The staging of the characters in every panel keeps the eye flowing across the story which gives such a cinematic feel to it. Especially nice are the almost full page panels that have a tilted camera angle which give us a camera moving feel to it. There is a lot of action in this issue and that flow translates perfectly into the dynamic movements of the characters. The poses he puts the characters in during the fight scenes help the reader to feel the power in punches being thrown even without sound words.

When combined with sound words in some panels ,we have an added pop of bones crushing. Although Bruce does his best to hide it, Fabok subtly lets us see his emotions in a few panels just at the corners of his mouth. He also painted a lovely portrait of Thomas in some of the final panels where we can see a combination of love and pride in his face. There is great detail work in all the settings, the cave looks old and mysterious, and costumes look perfect.

The coloring throughout is on point and breaks up the dark moody colors of Batman and his cave with the bright reds of the Flash.  The ink work is also spot on and really sets the mood of the Batcave. The ink adds to the Batmen’s capes and looks especially nice hanging from the hero’s shoulders.

Overall, we have a mostly perfect issue. The artwork is gorgeous and the story is mind blowing. These events should have a lasting effect on the Caped Crusader and affect the DC Universe as a whole. That Thompson and King were allowed to do this was amazing and the correct play by DC and a perfect addition to the core of the Batman mythos. It’s a heartfelt issue that fans will be surprised by and be talking about for the next couple of weeks until the last part of “The Button” comes out.