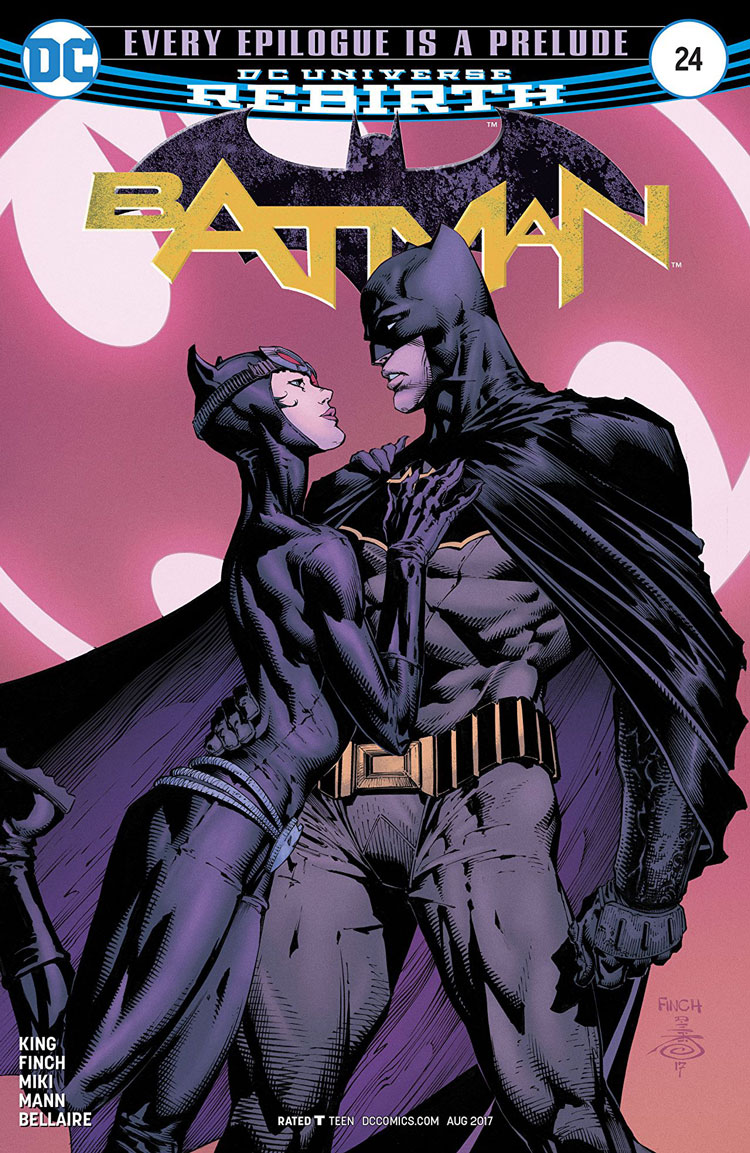 In the aftermath of revelations in “The Button,” Batman makes a shocking proposal to a long-time foe!

At the same time, so much happens in this comic. It’s the apotheosis of a year and twenty-five issues of Batman. Everything that’s happened so far — Batman’s adventures with Gotham and Gotham Girl, the raid on Santa Prisca, Bane’s revenge, the Button — all comes to a head and leads to a turning point.

There’s no point in being coy; DC’s already spoiled the ending of this issue in national newspapers and it’s been picked up and screamed from the headlines of every comic news site. This issue ends with Batman proposing to Catwoman.

It’s the kind of twist that begs to be viewed cynically, as a marketing stunt designed to move issues, to juice re-orders and second printings, to demand an obligatory spot in every Batman collector’s Big Batman Issues collection. “Batman volume 3, #24, the issue where Batman proposes to Catwoman.”

If you dismiss this issue as a stunt unworthy of your time, you’ll be missing out on a great comic. The ending feels deeply earned, both within the issue and through the 24 issues that came before. It delivers an emotional catharsis that outstrips any visceral thrill from seeing Batman conquer a member of his rogues’ gallery.

The bulk of the issue is a long conversation between Batman and Gotham Girl, whose mental health has recently been restored by the Psycho Pirate. It’s a meandering conversation that darts back and forth on themes of heroism and happiness, before circling around and inverting.

It ties directly into the similar rooftop conversation when Batman pulled Gotham Girl out of her grief spiral in Batman #6, and obliquely references the conversation between Batman and his pocket-timeline father in Batman #22. The conversation ends with Batman reaching a decision to change his life, a decision he’s been moving towards since the start of Rebirth.

It’s some of the most emotionally honest writing in superhero comics, which is unusual to say about Batman. There is, of course, the usual talk of duty and sacrifice, but it’s tempered with rare vulnerability. Bruce admits that he’s scared, and that his fear keeps him from finding the happiness that he’s too scared to admit that he wants. And Gotham Girl urges him to fight that fear, to do what he has to do.

The art, meanwhile, is gorgeous. The art shifts back and forth throughout the issue between two settings. Batman and Gotham Girl’s conversation is shown during the daytime, while Batman’s chasing of and conversation with Catwoman is shown at night.

Two separate art teams worked on this issue; David Finch did the pencils and Danny Miki the inks for the nighttime scenes, while Clay and Seth Mann handled art for the daytime scenes. The teams have distinctive, but compatible, styles, so the shifts are noticeable, but never jarring. The Manns bring an ethereal quality to the landscapes of Gotham in the daytime, while Finch and Miki’s art feels more focused on the figures of Batman and Catwoman in the rain-soaked Gotham night.

Uniting both teams are Jordy Bellaire’s colors, which are, as usual, perfect. Gotham in the day has a hazy golden glow, while at night everything is tinted dark blues with the occasional neon green glow. The end result is a book that remains visually engaging even as there’s precious little action, a triumph for the entire creative team.

Batman #24 is the perfect capstone on the first year of King’s already amazing Rebirth run on Batman. It has an emotional honesty rarely seen in superhero comics and manages a twist ending that is both surprising and the most natural thing in the world.