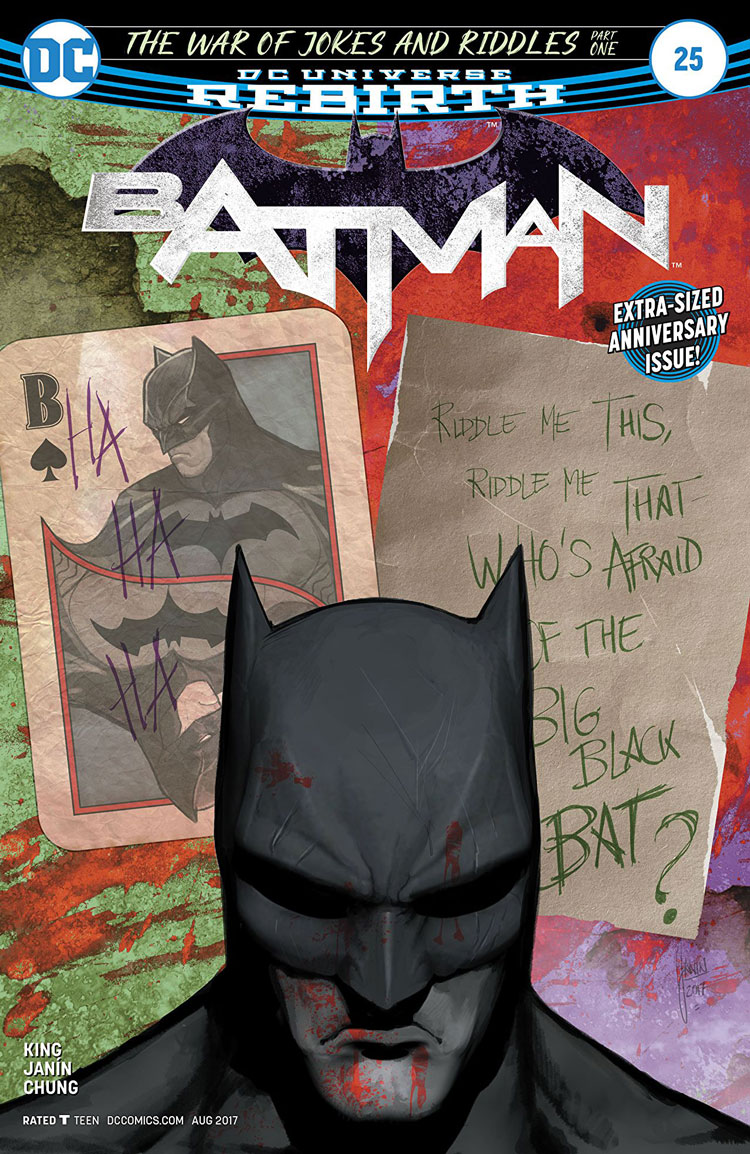 It’s been hinted at, it’s been teased, and it’s finally here. “The War of Jokes and Riddles” comes crashing into the Batman Universe and King opens the story as a brutally illustrated and grim tale of two halves of the same coin both seeking “The Bat.”

Part One to TWOJAR sets the stage for the war itself in full form. Joker and Riddler are the main characters here and we’re shown why these two villains are worthy of challenging Batman for supremacy over Gotham City. The war itself is a story lost to time. An adventure in the early days of Batman and Gotham City as a whole that’s regarded as one of the worst incidents imaginable and something of that magnitude is no small feat for a city that just got over multiple attacks during Zero Year.

TWOJAR feels different, there’s an air about it that shows this is about two men that would go well past their brink to get what they want and the opening pages that introduce the two of them are chilling to the bone. King is playing for keeps in how he’s setting up the two major players for this arc and these are some iterations of Edward Nygma and The Joker that are setting the tone for the type of brutality and horror we can expect in this eight issue epic.

Despite being called Batman, the entirety of the issue belongs to the powder kegs that are Joker and Riddler. King alternates between the two villains showing different methods to their madness and Janín sells every panel of it. The Joker’s segments are downright chilling to the bone, he’s on a mission to finally laugh again and his methods of getting there are savage to say the least. He’s shooting people for not making him find the laughter he’s lost. It’s dark, cold, and tells you this Joker operates differently than previous versions (that could also lead to the ongoing Three Joker mystery of DC Rebirth).

Janín and Chung supply the right amount of shadows and approaching grisliness that Joker is capable of. You vaguely make out his figure against the light on center stage but his voice is there, and that’s all you need to know. A moment of seeing what happens to those that can’t make Joker laugh at the Comedy Club will stick with you as the body count rises steadily over this one issue alone.

Riddler is far more calculated and efficient in his execution and display of his madness. Stabbing the lieutenant twenty-six times to show he had something to say is a far cry from the man we’ve seen in previous stories but there’s intellect beneath the panels that run red with blood as well. As later we find out how far Edward has stockpiled information to escape from Law Enforcement and it’s awesome to see Riddler still remain control and hold all of the cards even when the situation doesn’t seem in his favor.

Even when the story is the darkest it’s gotten in King’s run on Batman, there’s still room for Chung and the colors that’ll liven up any dreary day. The colors bring on this energy of “beautiful destruction” as Joker shoots his way out of trouble with the sullen face of his with the buildings and blue sky surrounding him.

In the dead of night, the two leading men of the story meet and it goes about how you’d expect a meeting of a joke and a riddle to go. Riddler is analytical and an intellectual while Joker gets straight to the point of what he wants or what he’s seeking. The teaser of the war in it’s full glory is kickstarted by a page showing most of Batman’s Rogues picking a side in the war and the characters and colors have never looked better under this art team.

“The War of Jokes and Riddles” opening chapter reinforces why the two leading villains are top tier Batman Villains and also ones that have the strength, pull, and capable hands of tearing Gotham City apart to get to the big bad Bat. Chung’s colors adapting and fitting any event in the comic, panel to panel creates the perfect atmosphere for this harrowing tale and Janín gives these characters mystique and a surge of evil that fits the characters and gives them an edge all their own.

King is writing TWOJAR as one of Bruce’s long kept hidden secret skeletons in the closest and it shows on the last page where he HAS to lay this story to Selina before they continue their relationship, no matter which course it takes. If this opening shot of an issue is the precedent or just a scratch of what King has in store for us in this arc that’s sure to redefine Batman… I’m on board 100%