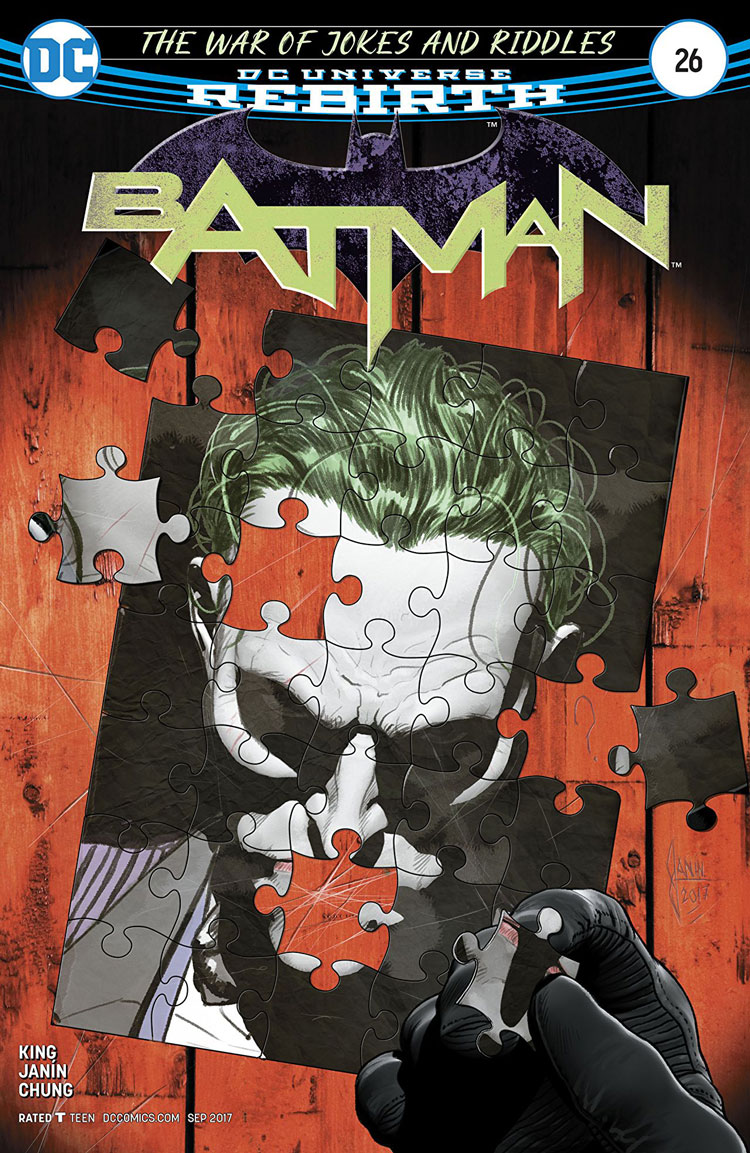 The battlelines are drawn as Gotham City begins to get embroiled in “The War of Jokes and Riddles” and the two leading sides begin to stake their claim for supremacy in the city.

The unconventional WOJAR continues to settle on Joker and Riddler with Batman and the city caught in the middle. King plots and layers out the Joker and Riddler as they begin to amass their armies to destroy each other, Gotham, and its citizens.

A story of this caliber needs to reinforce and clearly define why Joker and Riddler are two equals of madness and he maintains the horror and uncertainty that comes with showing how the two players operate. Joker drums up the horror and clear cut nature of his decisions with his gunshots and quest for comedy that signal a more savage take on the Clown Prince of Crime. He’s matter of factly, brutal, and shows no remorse and the deaths in his wake… the War of Jokes and Riddles is two chapters in and the stakes that it’s raising is settled on the shoulders of Joker and Riddler.

Batman remains on the edges of the story quickly becoming entrenched in the conflict in normal Batman style. Arriving shortly after a Riddler attack, where Edward licks his wounds and makes the best of his situation by truly becoming a question forged in blood. Surviving the shooting of Joker, he heals and cuts himself and forms a question mark with his wound as the end point.

Janín directs us to the wound with a zoom in window in the panels and the cutting into a question as he utters another riddle is his equivalent of his creepiness. The question marks his calling card of sorts as he makes his presence known as in classic Batman fashion… Gordon and Batman observe the crime scene filled to the brim with bloody question marks litter the scene marked with Chung’s colors all of this made from the body of the poor soul that was killed after Riddler was done with his help.

This shows a significant theme at play in TWOJAR and why it’s an unconventional story arc for Batman, at least right now. Chung’s colors provide a sunny and bright backdrop throughout the murder and real consequence of Bruce narrating about all of the citizens and bad guys that lost their lives during these trying times.

The vibrant colors in the panels almost lower your guard with what happens in the book and a type of beautiful destruction that has terrible things going on but Janín and Chung make it look so good. Zero Year in its entirety featured art that enhanced the story despite being a tale that eventually changed the Dark Knight forever and two issues into “The War of Jokes and Riddles” it takes the next logical step with defining the lines and laying out who ends up with who with Batman being weaved into it inch by inch.

Joker takes a different approach with dealing with The Riddler in the form of coercing Crime Boss Carmine Falcone and his men into killing him. There’s a page of him listening to the news and Janín expresses seven degrees of crazy as his face changes from smiling to rage to the frown he’s worn for the arc thus far.

Riddler otherwise talks to his fellow bad guys, King gives a relaxing conversation between Edward and Poison Ivy, two green clad warriors in their own right and in a forest chock full of plant life. Carmine’s men are helpless as Ivy snares them all as the two conversate and exit the park, with Batman not too far behind them to save the men and the narration that Bruce keeps up throughout the book signals that THIS story is one for the books as he recounts every name, every action, and the backstory relating to the people involved in the war.

King shows rather than tells with both Batman and the story at large including plotting for the future of Gotham with the inclusion of certain characters.

“The War of Jokes and Riddles” begins to come into focus as the two carry on with their onslaught of people in order to wage the war that will consume Gotham and force people and like minded villains to either get on board or get out of the way of the Riddler and Joker because no one is safe and if the continued narration of Bruce is any indication, you don’t know Batman if you aren’t aware of this story and this seems to be the case as Batman can’t even stop what’s to come.

Janín and Chung remain top notch for bringing brightness and sunshine to one of Batman’s darkest hours, the color work makes this a sight comic a sight behold and while the lack of Batman doesn’t hurt, it’ll be interesting to see how the Bat will combat the coming weeks of war in his city with a bold lineup of Rogues under the leadership of Riddler and Joker.