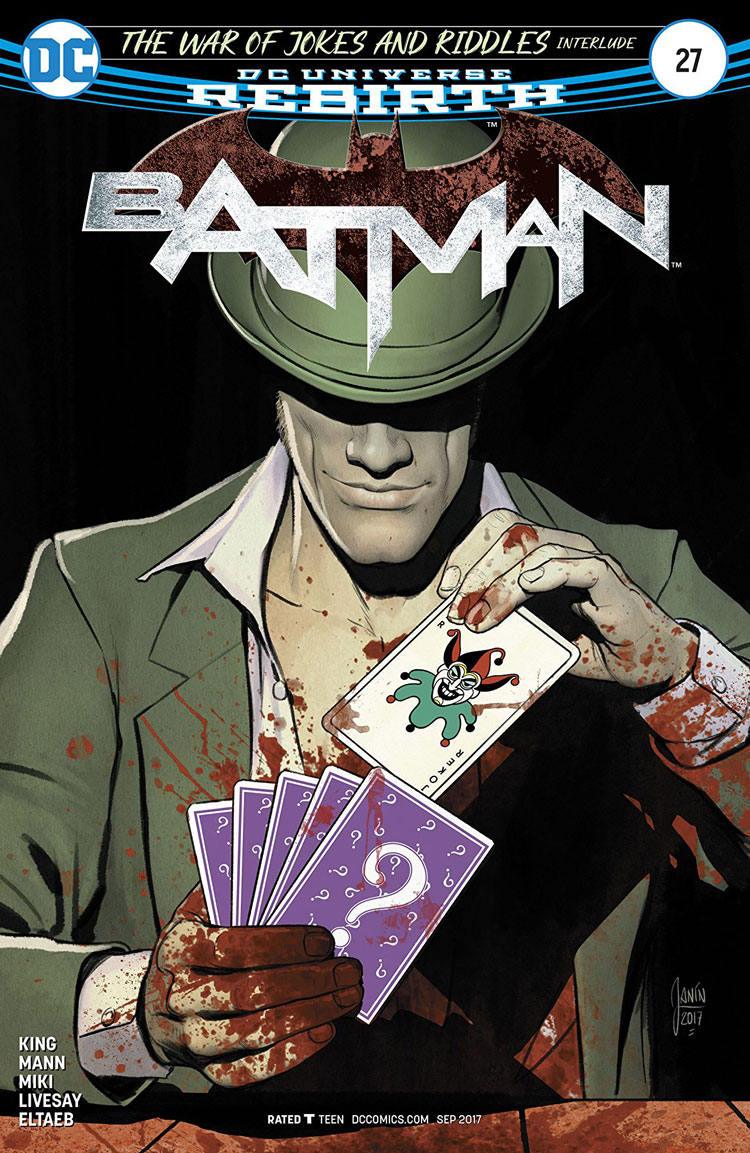 Batman #27 is an entertaining, but rather unnecessary chapter, in the ongoing “The War of Jokes and Riddles” arc. Set to the backdrop of a post-coital conversation between Batman and Catwoman, Tom King’s latest arc sees Bruce Wayne tell the story of a massive hissy-fit between The Joker and The Riddler that ravaged Gotham and forced a less experienced Batman to make an ominous — but dramatic — compromise in his ideals that has been secretly haunting him for years. And now that Bruce has proposed to Selina, he feels that she needs to know this secret in order to truly understand him and, more so, embark on a life with him.

This is heavy stuff for pillow talk. I personally always advise keeping the mood light. Tell a few jokes, throw in some reflexive listening, or simply ask your partner how they’re feeling because, you know, they’re there too. And never mind that, Bruce proposed to Selina probably about an hour ago in the story. She’s spending her first intimate moments with her fiancé by listening to him talk about The Joker. Bruce, you’re such a gentleman.

But enough relationship advice. Let us all gather around to dissect the panels. The chapter is appropriately labeled as an interlude, and as such is a side story about a secondary character, Charles “Chuck” Brown. Batman historians may already know where this man’s story is going but King uses him as our point of entry character to flesh out the “war” going on in Gotham.

Through Brown, the audience meets all the players in the arc, learns how dire the situation is in Gotham, and most importantly how the conflict is corrupting the virtues and psyches of its citizens. Brown, himself, then comes to a rather harsh epiphany at the end of his tale which in and of itself establishes the severity of the horrors going on in Gotham and strengthens the story as a whole.

So why am I being so grumpy and snarky? Because like Selina, I just want Bruce to get to the point.

We’re three issues into this arc and we’re still in exposition territory. Remember, this story is being told in a flashback model and present day Bruce providing narration. King’s script is, as always, potent, effective, and engaging but, Bruce’s narration for three issues has just been “this was bad,” “Gotham was in trouble,” “oh no,” “what have I done?”

This story has teased the likes of Deadshot, Poison Ivy, Mr. Freeze, Solomon Grundy, Clayface, Man-Bat, among many others. And yes, most of them have made an appearance but they’ve done nothing but posture. I left this issue confident that this arc could be great, but tired of waiting for a payoff. I imagine present day Bruce saying “Selina what do you think?” and then panning to a shot of Catwoman sleeping.

The art, by comparison, was very strong. The emotional crux of this issue was centered on Brown having to tread water between Gotham’s underbelly (that he has tragically become initiated into) and the home life that he needs to protect. Clay Mann’s pencils and paneling relate this conflict perfectly. Mann is not only able to capture the classic neo-noir vibe of Gotham but also draws each scene from a claustrophobic and constricted angle which broadcasts Brown’s desperation as a trapped and drowning man to great effect.

Mann is then wise enough to juxtapose these scenes by drawing Brown’s home life using very wide, open, and decompressed panels which emote the longing Brown has to simply be out of Gotham and with his family. Paired all of this with Gabe Eltaeb’s colors and the audience is gifted with a poignant picture of a man they would not have otherwise cared about.

This issue is expertly written and drawn, and on its own is a resounding success. It fully fleshes out the ongoing war between The Riddler and The Joker and it breathes new life into a footnote character from the Batman mythos. However, it is saddled with being an unimportant middle chapter in a story arc that has still somehow failed to leave its own first act. You’ll enjoy it while reading it, but may be quickly frustrated by the fact this story will be viewed as inconsequential when the arc is viewed as a whole — and at the realization that nothing has really happened in three issues.