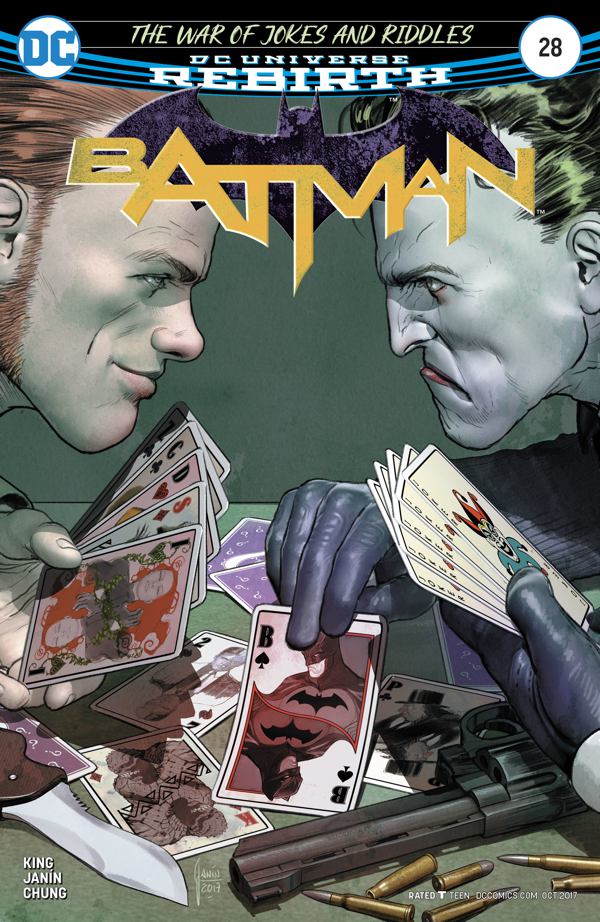 War begins to take it’s toll on Gotham and its protectors in the third installment of “The War of Jokes and Riddles” and King does not hold back in terms of what’s shown and the brutal accounting of the events from Batman.

This chapter of TWOJAR puts Batman and Gordon firmly in the driver’s seat and gives us the classic relationship we’ve come to recognize over the years. In the midst of Joker and Riddler taking charge as two forces of nature taking control of Gotham City in their own way. Gotham City is a high-rise riddled Wild West or a moment from The Dark Knight Rises where the villains are in control and the heroes are forced into a position of compromise or working of their own accord. Duality is a hell of a thing that comes into play with Janín’s art throughout the story. Gordon is the mediator for the two sides and we open with him being dressed and undressed for the specific side to talk to them, to end this violence but it falls on deaf ears. The quiet and stillness is only doubled with Batman’s and by that measure, King’s narration of Gotham City during this dark and trying period.”Once a day, for an hour, the two sides would quiet, let the authorities in. To collect the bodies.”

The colors from Chung give us an Gotham that relishes in the brightness and bleakness of the city as the villains wage war with the GCPD and BAtman caught in the middle. Clear blue skies hide the murky, and crime riddled streets that are Gotham City. King takes broader strokes in describing the war and it’s players. We’re introduced to villains that chose no side and live on the fringes, in this case it’s King’s mainstays Catwoman and Kite Man (Hell yeah!). Catwoman gets her say in the story involved dealing with both present and past as they both recount that fateful meeting that could be documented as one of their first original hookups. King continues his back and forth with the pair that’s been prevalent since “Rooftops” and it continues here. Bat and Cat keep their conversation simple and concise even in the present, mirroring the past as it happens. It’s a short and sweet sequence adding fuels to the fires of the Bat and Cat romance that has lasted all these years. Janín captures the subtle facial winks and nods of the characters and Chung’s colors define the two and outline them against the backdrop. Chung provides a level of immersion with her colors into the panels that provide a stylized look for the latter half of the book.

“The Battle of Snipers” is told as one of the battles that helped define the war itself. Janín gets unique and provides numerous angles utilizing the sound effects to detail the deadlock of Deadshot vs. Deathstroke. We’re told the gist of the fallout of two assassins trying to kill each other and Batman in the process. Batman’s narration is a dreary, hopeless tale of the five days it took to save his city from these two assassins but the costs are waning on his soul and these are just the men working for the men that’s initiated this war in the first place. Batman is a man that’s being forced to make tough choices and deal with them whether he wants to or not. People are dying and King makes a point to stress the thoughts of this particular story still haunt him to this day. Despite, his heroics and being there for the citizens of Gotham he still isn’t able to save everyone and the body count plagues his memory.

In a moment of exhaustion and weakness, King and Janín let Batman scream the rage out of him after combatting five days of Hell thanks to the two warriors. Batman as a title has broken down barriers as both an emotional hero that’s willing to move on and delve into his traumas in order to seek happiness. TWOJAR has been hailed as one of the darkest periods in his life and King is letting loose, and we’re only three parts into this epic. While this chapter doesn’t do a lot to move the threat of Joker vs. Riddler forward, it does give us insight into how Gotham reacted and viewpoints into how the City operated during this time. A war is littered with battles that’ve helped shape it and we get one in this issue to deadly results worthy of it’s name. Janín and Chung continue to be the standard for Batman in the Rebirth landscape as the Dark Knight’s world is colored with visually flair and colorful sights that throws the grim and dark world off kilter with King charting a Batman tale for the ages and gives us a true secret history for characters we’ve known for decades.