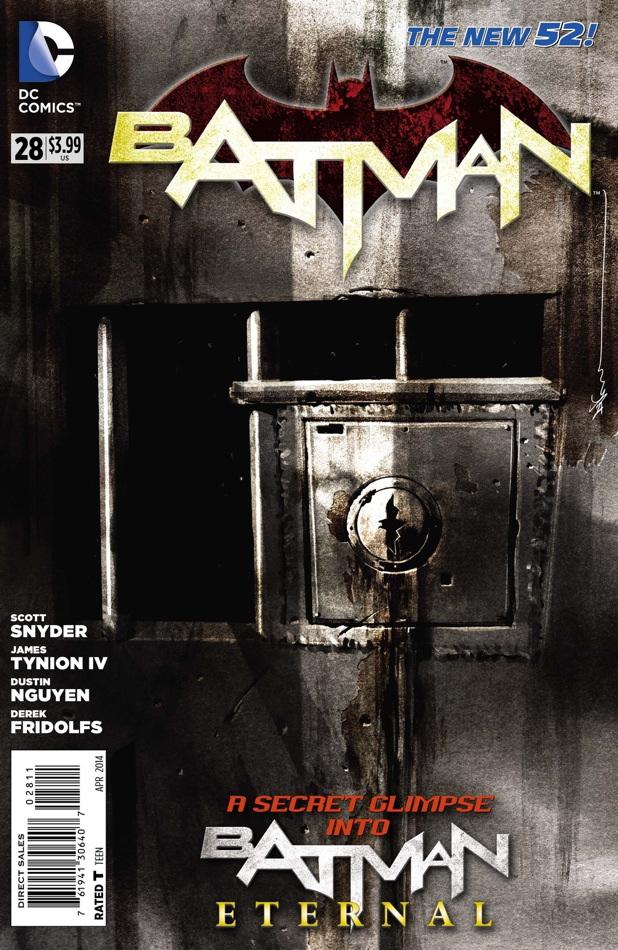 *Warning, this review contains a SPOILER. Read at your own risk.* 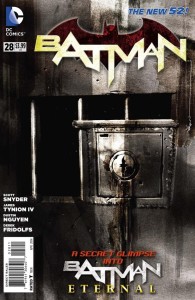 If you’re needing some breathing room from Zero Year, and dying to know what lies ahead for the Bat-family, this month’s Batman is just what you need. It does this while answering one of the biggest questions that has plagued a very vocal group of fans since the launch of the New 52.

This issue delves into the future Gotham that will be center stage of DC’s new Batman Eternal series coming up in April. It starts with simple investigation by Harper Row who quickly takes center stage for all the excitement while trying to find out who the new big bad is in Gotham.

Multiple questions are raised about just what is the new status quo. A character in shadow is shown providing aid to Harper and Batman. Is this Dick? Carrie Kelley? Another new face? Plus the big reveal of the new crime lord will stun you with both shock value and style.

Dustin Nguyen’s art and Derek Fridolfs’ inks shine in the action sequences where the Snyder & Tynion continue to combine terse banter with big hits. John Kalisz’s colors help the characters pop off the page with big power and big egos. Plus, Harper’s new battle uniform does a great job of paying homage to Nightwing using shadow and light, and in one panel straight-up highlighting make it clear what Harper’s new role is, with her own bird-themed nickname.  The power of the art becomes the most clear when Selina Kyle enters the scene. The combination of artists creates a femme-fatale redesign that suits the woman who is known for making things complicated for our snooping bat and his new feather-themed companion. Panels set in the art have color all over the page and make it easy for your eye to flow through the story.

Snyder & Tynion have become kings of leaving the reader wanting more. They have crafted a story full of intrigue and mystery that you cannot stop devouring lead to the biggest surprise of them all: the first New 52 appearance of Stephanie Brown! It’s just a clear enough taste to get fangirls and boys everywhere chomping for Batman Eternal, even harder than when her return was announced at New York Comic Con last fall. The appearance also seems to hint at and respect Spoiler’s original origin.

Batman fans will be satisfied and new fans, who haven’t been jumping into Zero Year, will get a great introduction to Batman Eternal to simmer in before April gets here.