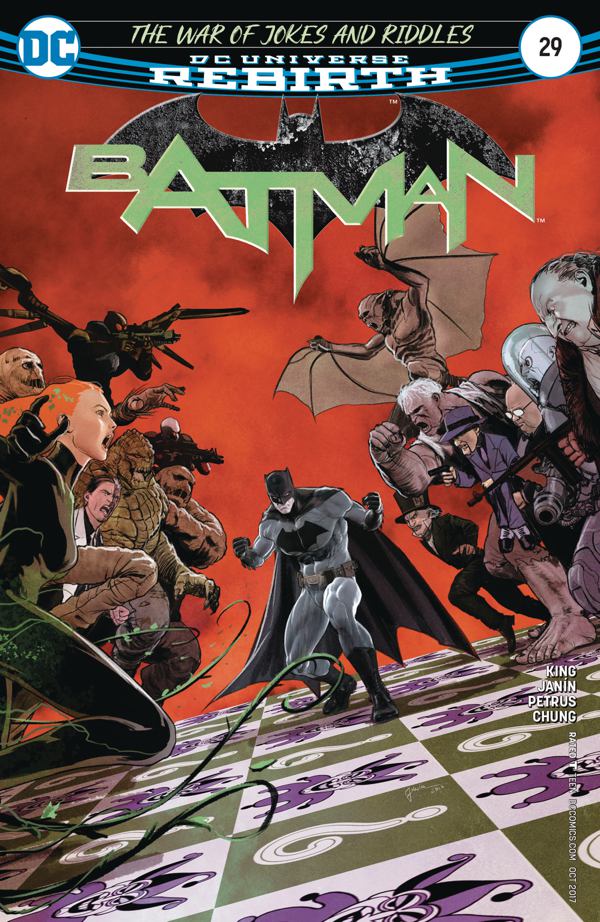 Dinner is served. Tom King subverts the tension of The War of Jokes and Riddles to new heights with one of the most important chapters of the ongoing saga since the opening shot four issues ago. The Riddler and Joker go to dinner, and Bruce Wayne is hosting.

Part Four of TWOJAR features an entire issue dedicated to the most tense dinner that doubles as another attempt at a peace treaty to prevent this war from escalating any further than it already has. This issue is all about Janín, Petrus, Chung propelling King’s dialogue to new heights and continuing to enforce the notion of both Joker and Riddler being forces of nature and striving to end the Bat of Gotham in their own equally brutal and savage ways.

The issue itself is split into increments based on the nine-meal course that our guests dine on. This issue is a far cry from the explosions, death, and irrevocably changed Gotham we’ve thus far. Instead King trades the dynamics and politics of Gotham City during war time for intimate, close quarters, and a meeting of the minds of madness. The nine course meal itself plays a part in the story from beginning to end. Janín, Petrus, and Chung all work together to provide rich and detailed meals with each passing course that they almost jump off the page with the looks alone. Janín’s pencils let the tableside conversations between the men and each sides onlooking future Batman rogues take shape in small almost cameo like quality as they stand, silently and readily to do battle given how close this keg is ready to blow.

In their own way, Joker and Riddler have a tit-for-tat about how they operate and their voice rings chillingly precise in the process. Joker talking about the last few moments before someone he kills passes on is told in detail and Riddler analyzes the point and turns it around on him, much to Joker’s dismay and results in one tense moment upon many throughout the evening. It’s an interesting route to take with the very much teased War of Jokes and Riddles giving us almost “bottled” episodes in the War and not full fledged Gotham City spanning warzones to take watch over. This particular instance features Joker and Riddler coming to the closest version of understanding to share in the problematic hatred of Batman. King gives a type of symbiotic relationship between Joker and Riddler in their connection to the Bat and while they don’t know that their host is the man they want to destroy, the methods involving Batman’s demise share a theme: They want him to die.

Janín parallels the two with two pages down to the panels and the elaboration of what they’ll do to the Bat once he falls and they’re able to get their hands on him and King pushes the two to the most vile and descriptive the characters have been in a long time. Janín, Chung, and the assist from Petrus sell the book and it’s dialogue from their character work and the coloring that goes into it. The absolute grim parts of the action are shown in black and white almost like afterthoughts during the dinner that are left up to the imagination against the colors and food palettes. The characters go back and forth with one another hurling points, jokes, and stares that could kill and it all works because they look the part and drive the point home. Every section of the book is fantastically drawn and established by the team that has more than definitely earned their spot when it comes to drawing Gotham and it’s citizens.

Ending the dinner with a power play…Gotham is set down the path to it’s future where this tale is told like a skeleton that was never moved from the closet. Taking shape we see the light at the end of the tunnel for Bruce, Gotham, and the types of choices he had to make to end the bloodshed that has pushed him well past his breaking point as a supposed savior of his city. King begins to line his ducks in a row to pave the way for his vision of Gotham through Bruce’s emotional resonance with his parents and how far you’re willing to go to get the job done and the final page shows he’s about to go to a place one wouldn’t think! Batman’s new age under King’s pen continues to grow as he reestablishes a Hero and his villains of whom we thought we knew all along but as he’s showed us for twenty plus issues…everyone has hidden depths even the oldest of characters.