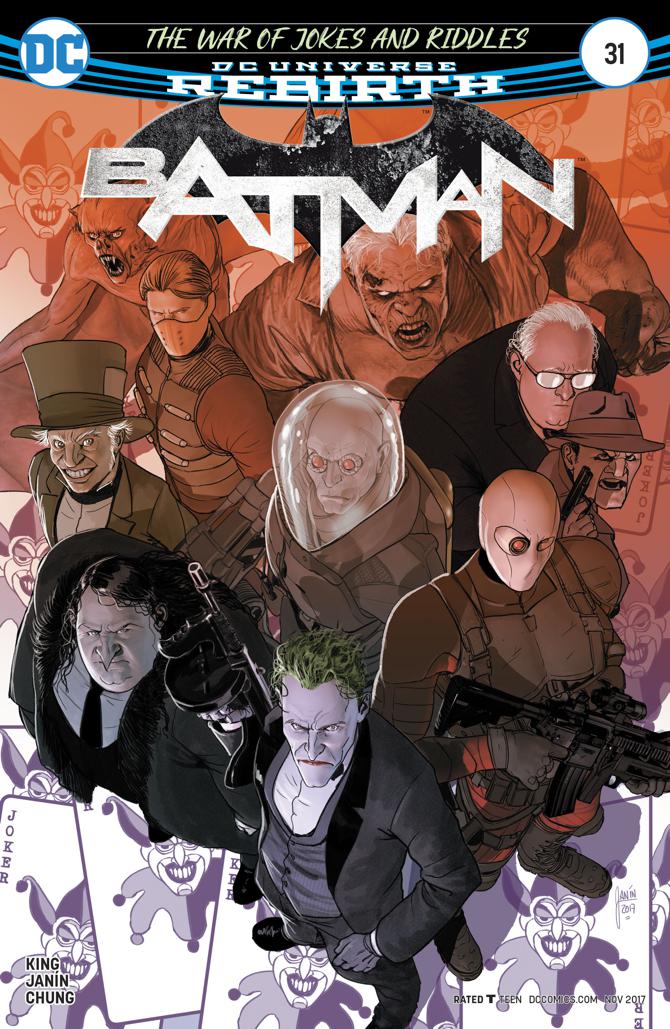 Team Riddler is on the offensive as TWOJAR reaches it’s climax and the stage is set for The Joker, Batman, and Riddler to end this war on a high note.

The War of Jokes and Riddles has been particularly interesting as a story arc. It’s not an epic sprawling Gotham tale of what war does to a city. It’s more so on the fringe of what he usually assume to be a War story arc. King has charted moments in time throughout this arc and it continues here. We haven’t see the entire push and pull of the reigns of Joker and Riddler but we’ve seen enough to know that it’s been a trying time for everyone and each issue inches us forward to different aspects of Batman’s journey through the madness. Part 5 of the ongoing arc may feature Team Joker but it’s all about Riddler and his team as they make their move on Joker in one final push to turn the war into Edward’s favor.

Janín continues to capture every tense second of this book and the opening page of Joker’s face reminds you of that. Insanity and cruelty go hand and hand in the pages to follow as he tells yet another joke to his one man audience that doesn’t end well for the man on the business end of a knife. The dialogue surrounding literal jokes and riddles is kept short and to the point and it carries Joker (and his future victim) to the next beat, either falling on the punchline or twist in the joke lest the man answer incorrectly.

The issue then spends its time with Team Riddler encroaching on Joker’s territory under the blue sky that seems almost unfitting for all of this death and subterfuge to be happening below it. While Batman and Edward discover possible ways inside of Joker’s Lair. Bats has a friend on the outside willing to lend a claw to the war effort and it nearly leaves her dead after a close call with three bullets but her efforts give them the opening they need to get to Joker. The colors by Chung contrast well with specific panels. Giving a backdrop for darker colors to be seen and everything in the panel becomes crystal clear, giving Janín the leeway to render the action and characters themselves as evil or brooding as they need to be.

King comes full circle with the character of Kite Man and his obligations to TWOJAR with a comedic moment with Killer Croc and his own quirky way of getting around Gotham serves as an entry point for Team Riddler with the best splash page involving kites you’ll probably see this year! Cowles adds a nice touch furthering the difference between Riddler and Joker with his speech bubbles being more narrow and off kilter than everyone else’s. Riddler vs. Joker gets a proper (short-lived) fight and the villains and Batman prepare for the finale by literally clearing the table, save for the three major players of this entire War, in a timely and smart sequence courtesy of Kite Man. We’re nearly at the end of the road of the story that will make or break a relationship in the present and the finale is set to change everything as three men do battle in a skyscraper where the War first started.

Part 5 of TWOJAR escalates the conflict between the men who started this war in the first place and keeps the consistency of capturing moments that are key to the story being told and not a drawn out tale taking place all over Gotham during War time. This is Bruce’s story and we’ve gotten his take on what this war has done and little else. That makes the story, special in some regards because we’re only getting Batman’s viewpoint so the war only has one or two lenses to be seen through so the intimacy of each interaction and moment is better. Janín and Chung remain at the top of their game capturing every panel and character with exceptional detail and exactness. This arc has been a dark and grim toll on Batman but Chung’s colors brighten the day to hit home even harder and Janín’s characters are all depicted well. With the finale within sight, Batman has one more issue to reveal the skeletons in his closest to decide his potential future with the woman he wants to be with and it’ll be a sight to see how it all pans out.