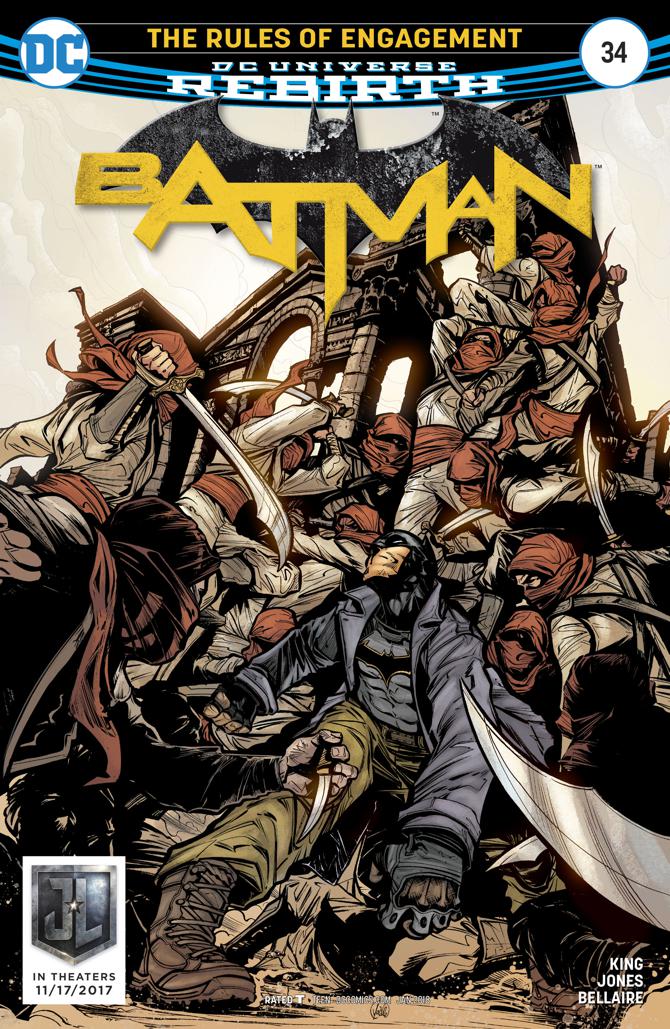 Batman #34 is superb. It is a combination of great storytelling and insanely impressive artwork that gives the reader more than their money’s worth. This issue continues the “Rules of Engagement” storyline that deal with the aftermath of Batman’s engagement to Catwoman. It continues to develop their own relationship as well as that of friends and foes close to them.

Tom King once again delivers a fun but epic storyline in issue #34. While some people may not have agreed with the “gimmick” of having Batman propose to Catwoman the stories that are being spun out of that are giving the Dark Knight new life. The dynamic between the Bat and the Cat is different, vulnerable, and fun. The vulnerability becomes painfully obvious in this issue and could lead to problems in the near future.  This new vulnerability in Bruce Wayne is not because of his engagement but is definitely magnified by it. Bruce was fundamentally changed by his encounter with his father and King is revealing this in some not so subtle ways. The story not only develops his father’s relationship but also Damian Wayne’s relationship with his one time partner Dick Grayson. There is a great moment between the two in the middle of the story that shows that King is developing the Batman family for the next generation. Apart from the story in general, King’s dialogue shows that you can say a lot with just a few words. There is a back and forth between the new couple that shows them trying to maneuver the “domestic” side of this new relationship. It’s the type of conversation that most any couple would have and yet is uniquely Batman/Catwoman. For the most part the issue’s dialogue consists of a few words at a time and paired with the artwork that is really all that is needed.

Joelle Jones style is perfect for this new dynamic duo. It encapsulates the youthful feeling that love brings, and their sensuality, while tempering it with the ruggedness of vigilantes. Apart from Jones’ style, her layouts draws the reader throughout the story with fast paced flowing panels. Series of quick panels bring the drawings to life and gives the fight scenes added action, doing away with the need for action words. There are a number of close-ups that are excellent in this issue. Lips, faces and feet feature prominently breaking up the monotony of scenes of full bodies in action. These highlight the intense emotions that inundate the story. Jones has done an especially good job at capturing Selina’s expressions: determination, bemusement, and love.  There is a masterful use of negative space throughout the story spotlighting important moments and balancing out each panel beautifully. Filling those negative spaces are Jordie Bellaire’s beautifully deep colors. There is passion in Bellaire’s choice of colors and set the tone for the high emotions being felt by all the characters. Even in Batman’s blacks there is a certain passionate tone that isn’t his usual macabre vibe. Clayton Cowles lettering pairs nicely with the artwork style. It’s subtle and doesn’t distract from the art or writing, and that’s how it should be.

Overall, this is a must have. It’s not necessary to be up to date on the story, this issue can be read on it’s own and nothing is lost. It’s important to experience the passion of Jones’ art work here and the King’s story makes it that much more enjoyable. Don’t miss this issue!