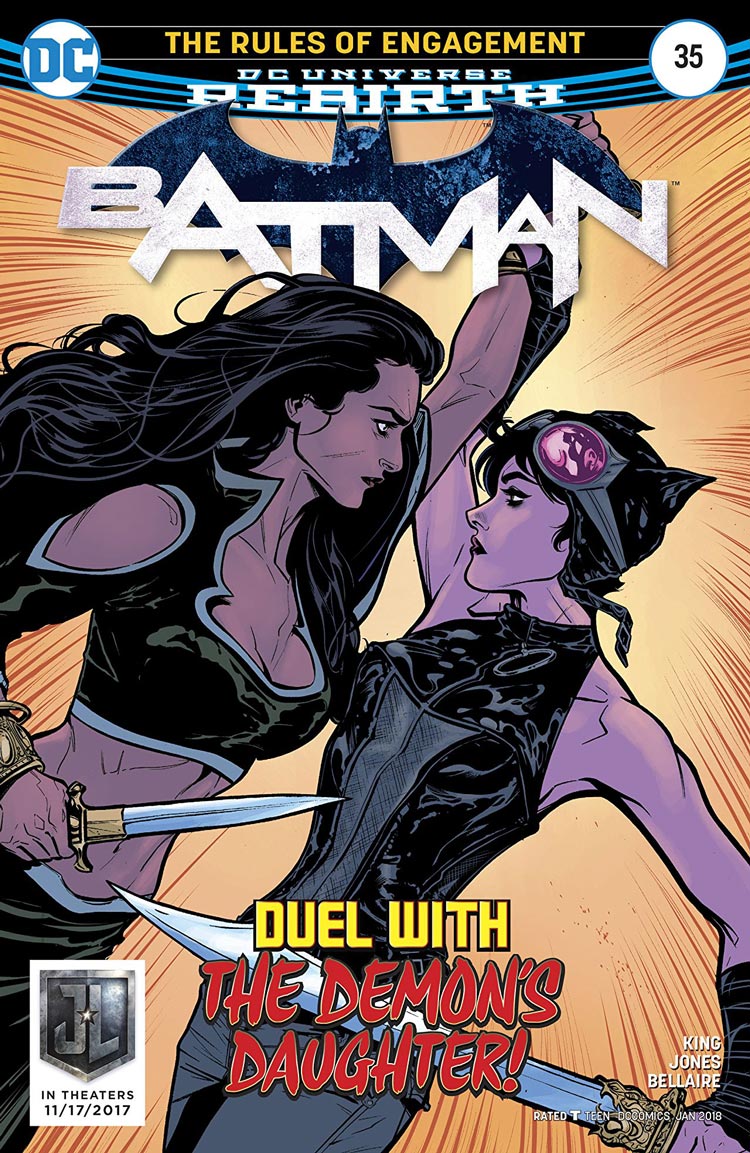 The Daughter of the Demon vs. Gotham’s Cat.

Talia and Selina have swords in hand, discussing matters of love for the Detective. Meanwhile, Damian is coming to grips with his father’s proposal, and Dick helps him better understand some of the situation’s particulars. While Talia would rather not see Selina betrothed to her Detective, the Cat makes a rather strong case for why it should happen.

Tom King layers the story to help us see the dynamics and motivations behind Selina’s love and Bruce’s choice to propose to her. One of my favorite things about King’s writing is his ability to pull together complex ideas around a central theme; by the end of this issue, we are privy to why the Bat and Cat want to be together and how those around them feel about that decision.

King starts the issue with a conversation and a fight between Selina and Talia, both of them discussing where they came from and how they relate to the Detective. There’s a lot of things to unpack here, from what it means for two women to fight over a man to the idea of equality in relationships. To some degree, Talia making this kind of decision seems to align with her character, but had the issue solely focused on her quarrel with Selina, I think it could have come dangerously close to reductive ideas about women, love, and the men they relate to.

Within the narrative, Talia also brings up the idea of being equals and how she does not see Selina as Bruce’s equal, which an interesting matter itself. I wonder how the story would have changed if instead of the idea of equals in terms of skill or power it addressed HOW these women could potentially fit in Bruce’s life as a partner. Selina admits she knows how Bruce works, that he’s someone who is hurting and flawed, and her love for him seems to be either in spite of that or because of it. This, too, has a lot of meaning to decipher and on the whole I’m not sure it is beneficial to the story or to ideas of relationships.

My absolute favorite part of this story is Selina in every way that she shows up. She’s witty, condescending, and she’s a fighter in many meanings of the word. King brought all of her shining qualities to the fore in crafting this story and seeing that is truly spectacular. In terms of a marriage to Bruce, I also feel like these characteristics show why she is a good match for him, as I have for a long time. She demonstrates power, defiance, and compassion by the end of the issue and I like the attention paid to these parts of her.

Joelle Jones on this issue and in this story arc is just a sight to behold. I like the level of care and deliberation put into the women’s bodies in this issue. Jones shows Talia and Selina as aggressive and feminine and avoids many issues common in comics such as unnecessary posing or hyperfocus on sexualized body parts, as well as giving Holly a different figure to add some body diversity to the story.

Selina and Talia’s fight looks amazing, especially due to Jones’ penchant for flowing art. This style works well with King’s narrative structure, and I can almost visualize this fight as animation or real-life choreography. The breakdown in each movement and strike is helpful for digesting the story and the way that Jones has crafted it helps to emphasize the action even with a subdued environment.

One of the most striking parts of Jones’ work is the inking. The depth and weight of the inks around Selina and Talia assert them as the major players in the story. We are drawn to them because they exists as prominent visual elements amongst the ruins. The same weight is not put onto Damian, Dick, or even Bruce, who are drawn with a lightness appropriate to their role in the story.

Jordie Bellaire’s colors make the entire issue feel quiet. The nighttime fights and conversations are covered by the dark blue sheen of the sky. I love that when the colors depart from this atmospheric theme, they are significant elements which help the plot and its symbolism. Holly looks like a ghost, but she is rather bright in comparison to everyone else.

Talia as the story’s catalyst is clad in green and gold. Dick and Damian are the only characters illuminated until the end of the story, and most of the time the focus is on Dick, a neat layer to his role in the story of revealing Bruce’s nature to his son. Bellaire definitely shows that colors in comics can have a restricted range, tone, and hue and still manage to portray powerful visual storytelling.

Batman #35 continues the story of the Bat and the Cat with a pivotal fight between her and Talia. Though there are some themes regarding relationships worth addressing, I like how this story just works. All of the creative choices add a new layer to this issue that make it a thought provoking read. Selina steals the show as always and her presence makes this comic entertaining and engaging.

I’m interested to see how the proposal continues to affect the Bat-family and what it means for the future; what this comic does is shine a light on what drives the pair together and on how Bruce may just be trying to grasp happiness for himself.