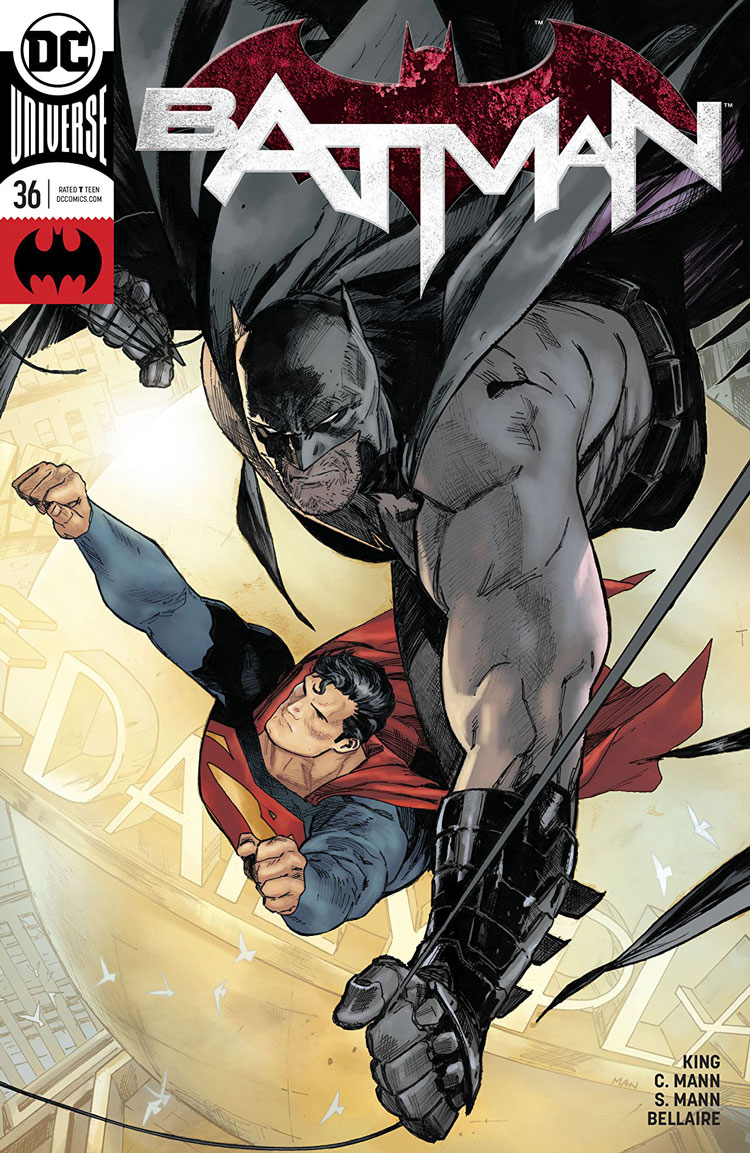 Given how often comics focus on the explosive dangers of being a super hero, an occupation fraught with explosions and danger, King’s choice to have such a lighthearted and “mundane” issue be at the heart of Batman #36 is touching. While Super Sons has been doing wonders for showing the friendship between Clarke’s son, Jon, and Damien Wayne, King’s spotlight on the relationship between Bruce and Clarke is great because of his humorous a scenario is before them.

Who talks to whom first after a friend gets engaged? What happens when that friend is Batman?

King’s writing shines through in this issue partly because of the relationship between Bruce and Seline, one that emphasizes her willingness to say the things he can’t really admit or talk about openly. One comical jab comes from the idea that Bruce would try and pass off Gordon or Alfred as his best friends (with a line about cucumber sandwiches being one of the better bits).

Selina’s ability to push Bruce is paired well alongside Lois’s dynamic with Clarke, showcasing how two of the DC’s more iconic characters are still, at heart, people. Sure, one is alien and one is richer than god, but they both need encouragement and human contact to keep their lives as individuals functioning.

While Superman may be able to stop trains, he has a (to borrow a phrase from one of the DC Animated movies) “all too human” fear of opening up. Bruce going through the same issue simply shows how these two characters can be more alike than they are different, an approach not actually pursued by as many writers as some may expect. In King’s hands, this issue is a lighthearted effort that services the characters well.

Working in tandem with King’s writing is the pencils and colors of Clay and Seth Mann. In a comedic routine, timing only works when rhythm is established. Much of the fun in Batman #36 comes from the amazing art, which this reviewer at first took for granted because of the desire to focus on the narrative. The art is what makes everything sing, from the casualness of Superman’s conversation with Lois while being punched through desert rock structures to Batman and Selina’s heart-to-hearts over breaking criminal faces.

The fluidity of the art showcases the very “godlike” nature of these DC heroes, yet their mundane, human concerns highlight their fragile sides. The colors by Bellaire deserve some attention for the attention to detail it brings out. Some of the final pages in particular showcase Superman’s red cape alongside golden/tan décor, which is contrasted by Batman’s inked/slick coloration schemes. The dynamic works well and other colorful touches (such as Selina’s goggles, Batman’s purple cape colors, etc…) bring lightness to some of the dark, twisted Gotham locales the characters frequent.

In conclusion, while Batman #36 is destined to be a brief moment of grins in a collected trade paperback one day, its present incarnation as a single issue is worth it for those who want to see King’s take on a pair of traditional heroic pals and their amazing, confident wives/fiancés who bring out their best qualities.