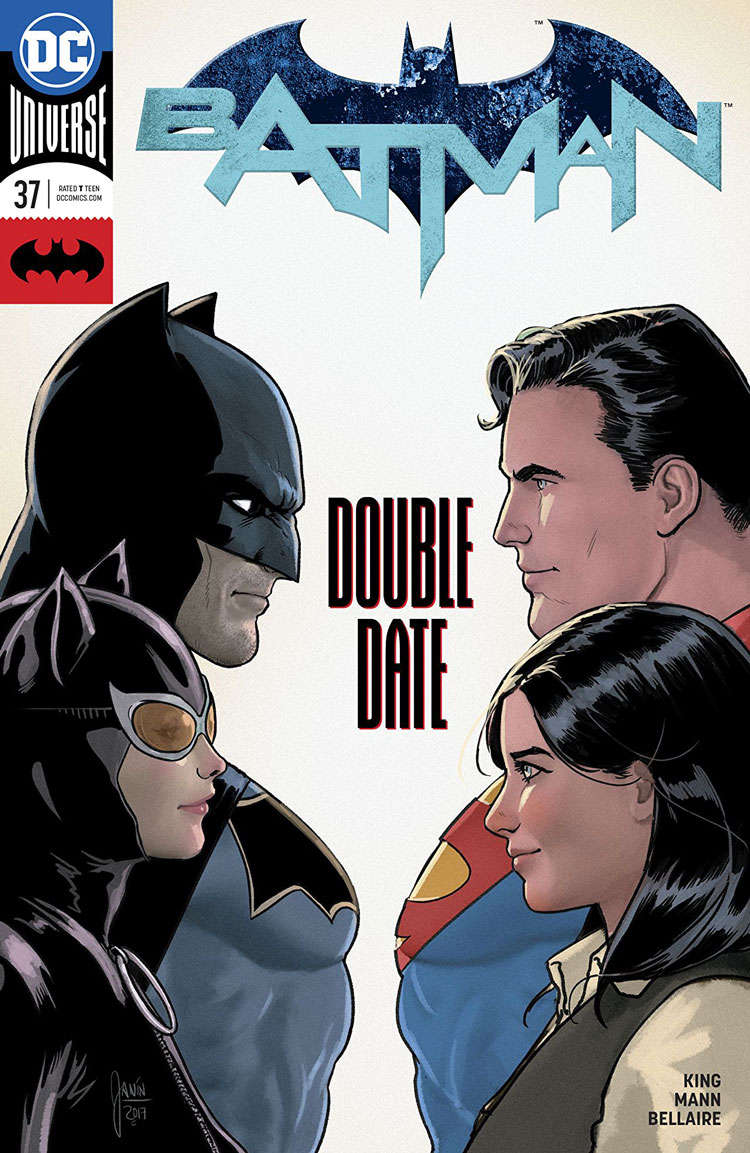 Super Friends was a campy, hyperbolic, but fun version of the heroes we love that filled Saturday mornings with laughter and levity as a kid. It portrayed the Justice League as a group of best buddies that fought crime together and is nothing like the apocalyptic fighting demigods we read in comic books now.

To read the “Super Friends” story line running through Batman now, though, brings a welcomed breath of fresh air and a reminder of the heroes’ humanity. Tom King and fellow creators have captured the classic fun of the past, while still maintaining the serious side of a more mature group of friends.

King uses this issue to explain the reasoning behind Bruce’s decision to propose to Selina.  In conversations between the men and women we see them trying to understand the unusual upcoming union amongst themselves. In doing so, it not only answers this question, but also goes a long way at humanizing Bruce and Clark. Their struggles to understand each other’s reactions, as well as themselves, grounds them in the human struggle that we all go through.

King does an excellent job with Bruce and Clark’s back and forth, but Selina and Lois seem to be lacking something. It almost feels as if the women lose their base character’s in the discussion and turn into “basic” girls. It is understandable that they would act differently in this type of situation, where they feel safe and not have to hide secrets they have. However, they may seem to lose too much of themselves.

Apart from this the story is pure fun. It’s time off from lives that are typically full of death, destruction, and despair. King captures these moments of “letting loose” perfectly and shares them with the reader. King excels at these times of interpersonal vignettes in his writing as can be seen in his recent Mister Miracle writing as well. It feels real and human and will make the reader wish for a sitcom about these two couples just spending their down time together.

The overall message though is captured in the final frames of the issue as the Man of Steel and Dark Knight together attempt the impossible.

The art in this issue is fantastic. Of course, the main characters are all drawn superbly, but the perfection lies in the details behind them. The reader gets a look at a number of DC characters portrayed in classic “Super Friends” costumes walking through the backgrounds. Other heroes that didn’t make an appearance in the classic series also get the 70’s cartoon treatment.

Mann also continues to show his love for the classic 80’s show Magnum PI with some hidden references to the show.  More details that really make this issue are the expressions on the two couples faces. Mann captures the meek yet powerful look of Clark Kent’s hesitation as he chats with others. The girls each have their own subtle qualities that instantly identify them as the questioning reporter and confident cat burglar. Bruce is…Bruce.

An especially outstanding page appears towards the end of the story and mirrors the content of the discussion the couples are having. It’s a nine panel layout used as the background for the couples walking over it. It could have turned out to be a confusing mess but, just as they are discussing, it all somehow works out beautifully.

I really have to hand it to Jordie Bellaire who does the colors for this issue. There are so many costumes in this issue, and again, it could have been chaos but the colors are done subtly. They never once over power our main characters while still being eye catching.

Also, the backgrounds for some of the scenes are beautiful. Bokeh style lights behind the heroes really softens the moment while highlighting their stalwart convictions. Clayton Cowles handles the lettering for this issue and does an outstanding job.

This issue is a fun throwback to the roots of where are heroes came from. In our youth they were fun loving adventure stories that made us laugh and dream. As we have grown, they have matured with us, sometimes leaving behind what we once loved about them. The creators of this issue obviously had fun creating this story and injects that enjoyment into the pages. It’s a great reminder to take a step back from the sagas and legends that we revere and just have fun with them again.