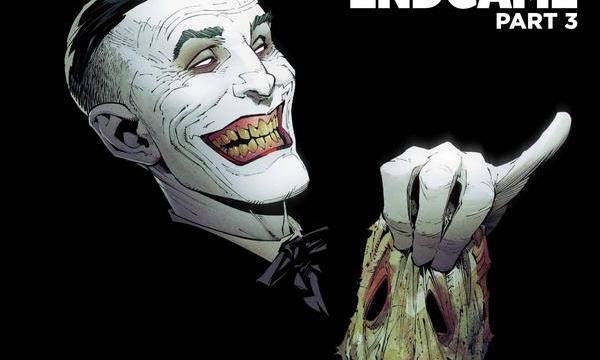 Scott Snyder’s mastery of these characters continues in Batman #37, another issue written so well that I will admit to almost being at a loss for words. This is one of the creepiest comics I have ever read and Snyder & Capullo’s pacing of the story is absolutely perfect. Each spine-tingling, heart stopping moment occurs at exactly the right beat, leaving me spooked, jumpy and looking behind my back every few seconds, waiting for doom to strike. This arc has captured my attention like no Joker story ever has, even the one earlier in this run, as this Joker is a menace the likes of which Batman has never faced. The allusions to demonic influences takes this story to very interesting places and is an angle that I am very much enjoying, which is only built upon in this issue. The creepiness of The Joker and the questions of what he is and what he is capable of will leave your mind reeling when you finish this comic, and I cannot compliment Snyder enough for writing something that sticks with a reader (and I plan on billing him for nightmares suffered). Snyder is throwing down some absolutely amazing character building as well as action in this one, crafting a thriller that Hollywood only dreams of, each page increasing the intensity and confusion and entertainment. To say he’s at the top of his game is an understatement and Batman, as written by his hand, is an absolute must read.

His partner in crime, Greg Capullo, is firing on just as many cylinders and the artwork in this issue is absolutely fantastic. The creepiness of The Joker does not work unless Capullo sells it, and by God does he sell it. The pages in this issue are flawless and that is not a word I like to use often. The page construction leads to some thrilling reveals and extreme tension and Capullo’s pencils are simply amazing. He nails the emotional beats of the issue, the frantic, psychotic beats and the chilling, horrific ones with what appears to be ease and with this issue he and Snyder are adding another brilliant chapter that will be remembered when this legendary run is looked back upon in a few years. Capullo’s work is nothing short of masterful and few artists have ever had my heart racing like the visuals in this comic did from start to finish. The colour work by FCO Plascencia takes Capullo’s brilliant work to the next level and highlights the strengths of the visuals in every way. The creepiness of this comic is just that much richer due to the colour work and there are some absolutely explosive pages that sizzle due to Plascencia’s work.

The backup story by James Tynion IV and John McCrea amps up the creepy as well with readers learning another one of The Joker’s tales from an inmate. This raw, dark backup adds another level of darkness to the overall tone of the arc and is well executed. This is a gritty, dark tale that will kick you in the stomach, just as it is meant to, with a final page that you’ll have haunting you for awhile.

Batman #37 is another brilliant installment in what has been a fantastic arc so far. Snyder, Capullo, Plascencia & the entire rest of the crew are managing to outdo themselves month after month and are crafting one of the strongest superhero comics in recent memory. This is Batman (and The Joker) at his absolute best and I cannot wait to get my hands on #38.