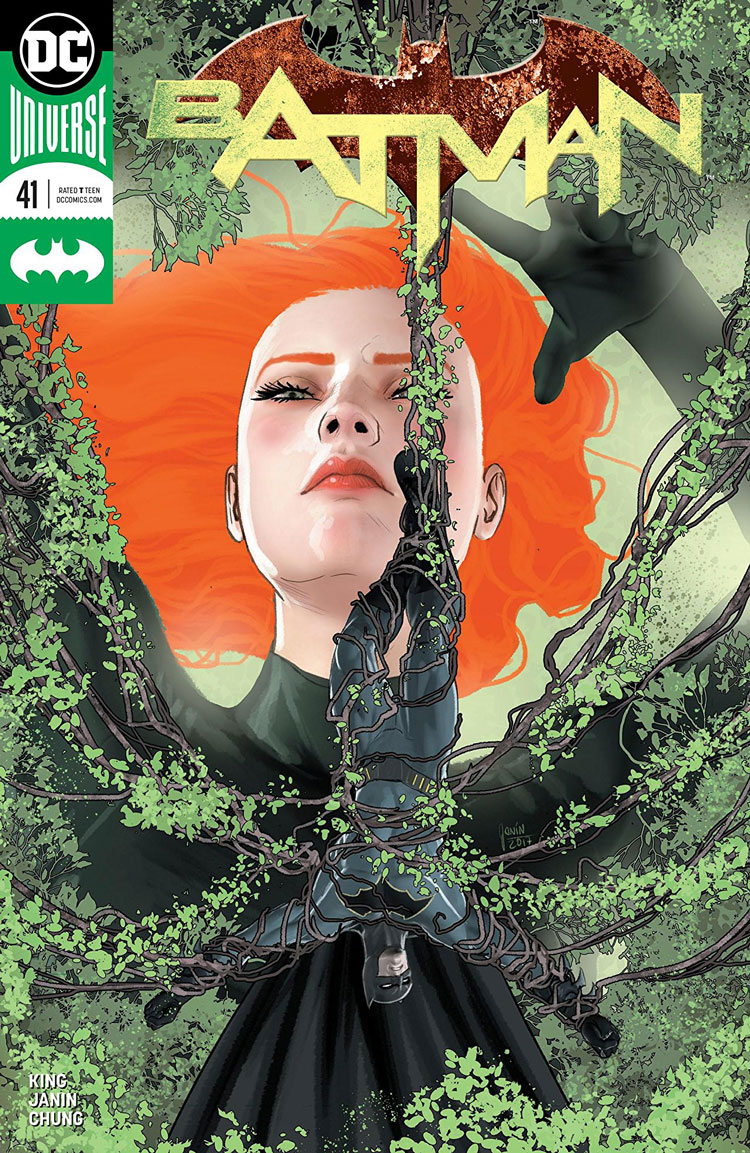 In “Everyone Loves Ivy” Part 1, Poison Ivy brings the entire world under her control… except for Batman and Catwoman.

First issues of comic arcs are always tricky. They have to set up a story that intrigues without feeling like they’re rote, or a waste of the reader’s time and money as they mark time until the climax. Tom King’s run on Batman has been remarkable for never feeling like it was phoned-in, like it was following a formula of standard plot beats in order to move the reader from point A to point B.

This first issue of “Everyone Loves Ivy” is no exception.

The issue is divided into two halves, both of which open with Bruce and Selina in bed. The focus of the dialogue in both is Poison Ivy. The first half is an otherwise-silent action sequence featuring narration by Ivy as she simultaneously romances and seduces 7.6 billion people. The second half is a conversation between Bruce and Alfred, who is under Ivy’s control and speaks with her voice, as she gives an artful villain speech.

What’s been striking about King’s run on Batman has been his experiments with form. Oftentimes, rather than telling us the full story he elides the rote and boring exposition to show us only the most striking and interesting scenes. Here, for example, he doesn’t tell us how Poison Ivy has mastered the Green, nor how she is using it to carry out simultaneous seductions of every person on Earth.

Rather, he offers the words she uses to seduce followed by a double-page spread to show the breadth of her reach. It shows a deep respect for the reader’s intelligence, their ability to piece together the story without being spoon-fed. It also respects the reader’s time. Stories that other authors might have stretched to six issues King squeezes into two, and he does it, not through compression, but through giving the reader just the good parts.

It feels as though there’s an elephant in the room that has to be addressed: in this comic, Poison Ivy is presented as full-on villainous. She enacts a (thus far, highly successful) conquer-the-world scheme that results in her totalitarian domination of the will of every human being on Earth, but for two. It’s a portrayal that’s hard to square with other recent versions of Poison Ivy, particularly the versions in the (non-continuity) DC Super Hero Girls and the more anti-heroic, but benign, Ivy of the Harley Quinn ongoing.

For me, the portrayal in Batman #41 works well. Ivy’s actions seem in keeping with her general goals, and the dialogue King gives her, both in her seduction and in her chat with Batman, make her deliciously sinister. That said, if you have a strong preference for a heroic Ivy, this comic may not work for you.

Mikel Janin brings a litheness and dynamism to his characters, whether it’s Bruce, sweatily running for the Batcave in his underpants, or Ivy’s ethereal beauty, memorialized in several splash pages. There’s a particularly striking double-page spread of all the people in the world declaring their love for Ivy that’s meticulous in its detail and practically demands the reader pause to examine every inch of it. June Chung’s color work complements the art superbly, contrasting muted pastels with more vibrant shocks of red and green to give the work a hazy, dream-like quality.

Batman #41 is a promising start that engages the reader with dynamic art and meticulously crafted dialogue. It serves as an excellent opening to what promises to be an interesting story.