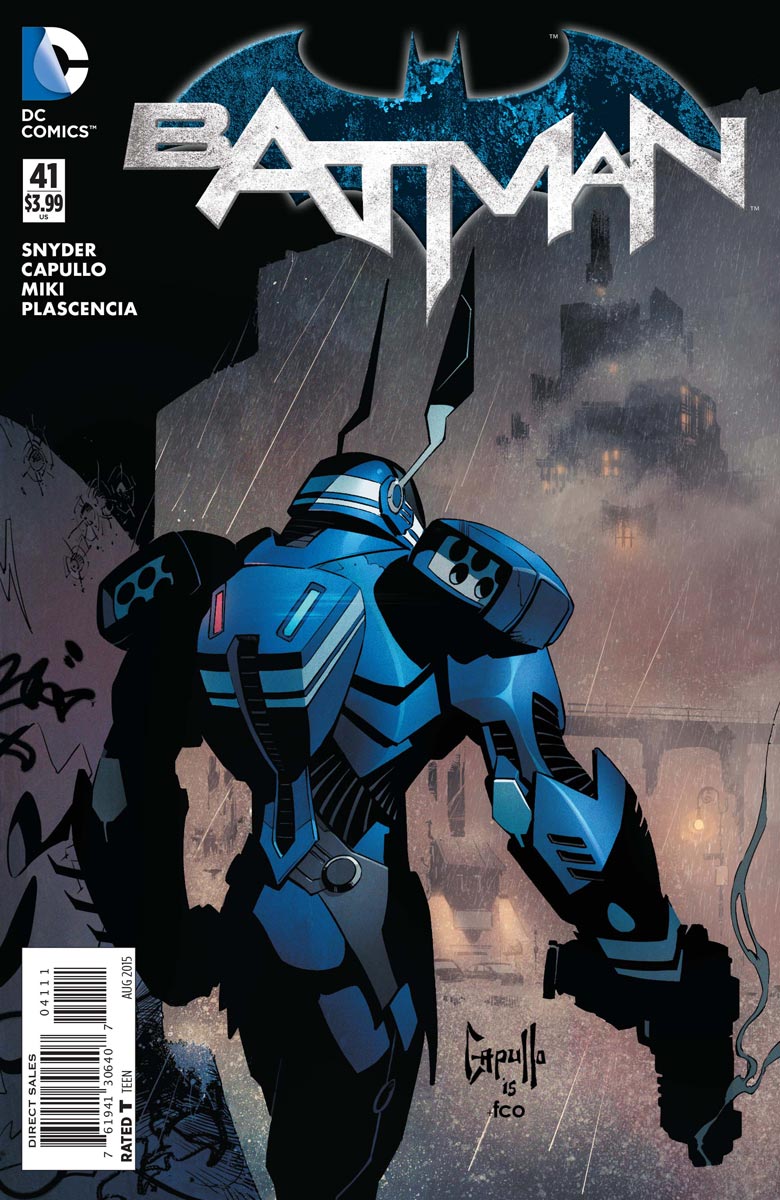 There is a new status quo in Gotham, as the highly anticipated first issue after Convergence and Batman’s epic showdown with the Joker is finally here..and it is of typical Snyder/Capullo quality.

If you’ve seen the cover above, you know that this is not the “normal” Batman patrolling Gotham anymore. If you’ve seen the numerous amount of spoilers floating around the web, you’ll know that it is former Commissioner Gordon at the helm of this armored shell, using the Bat iconography to maintain some semblance of hope in Gotham. This is unlike any Batman story to occur since the New 52 and that isn’t a bad thing, Gordon is as likable as ever, and his support staff is made up of some very interesting characters. Similar to other storylines in which a character takes up the mantle of an icon, there is a palpable weight in this comic, where the expectations of living up to the “original” is very high. Snyder and Capullo choosing to place this burden on Gordon was an inspired choice, as this is much more than a Robin being promoted into the cowl. This new Batman works inside the law, and I found myself very intrigued by this issue from the first page to the mind-blowing last.

At some point, I’ve assumed the quality of Batman will need to dip. One might logically think that this would be the point – that the team is trying something new because the tank is running dry. I can confirm that any thoughts of that nature are bulls***, and this pair of storytellers are putting out high quality work with issue #41. Bruce Wayne does not need to be present for Snyder to tell a gripping story of Gotham with some solid action, great dialogue and fantastic pacing. He explains the situation with respect to how Gordon became the man in the suit, what made him the right person for the job and what the new job entails in a way that does not feel forced, which is saying something considering this is, in a sense, an origin tale.

Greg Capullo’s work is excellent, and the new look and feel for Batman is no joke. Capullo pencils Gordon in a manner that you buy him surviving high action sequences but also having an aura of experience around him. Gordon’s seen it all, alongside Batman much of the time, and Capullo injects the wisdom of the character into his facial expressions and mannerisms. To say Capullo is a great artist feels ridiculous at this point, but he excels at everything. The action sequences are big and explosive, and the scenes with tons of emotion are just as powerful. He pencils humour well, crafting a clever scene that will have long time Bat-fans laughing, but also showcasing how this is the start of something completely new. There isn’t a poorly penciled panel in the bunch of ’em, and his work on the last page is absolutely chilling.

Snyder and Capullo have done it again with Batman #41. What have they done again? Taken Batman to a new place without diminishing the quality of the book at all, and crafting an engaging, entertaining story. Anyone contemplating jumping ship with this issue is losing out, as they’ve already got me hooked with this story. This is a great read and I have a feeling there are more great comics coming in this arc of Batman.