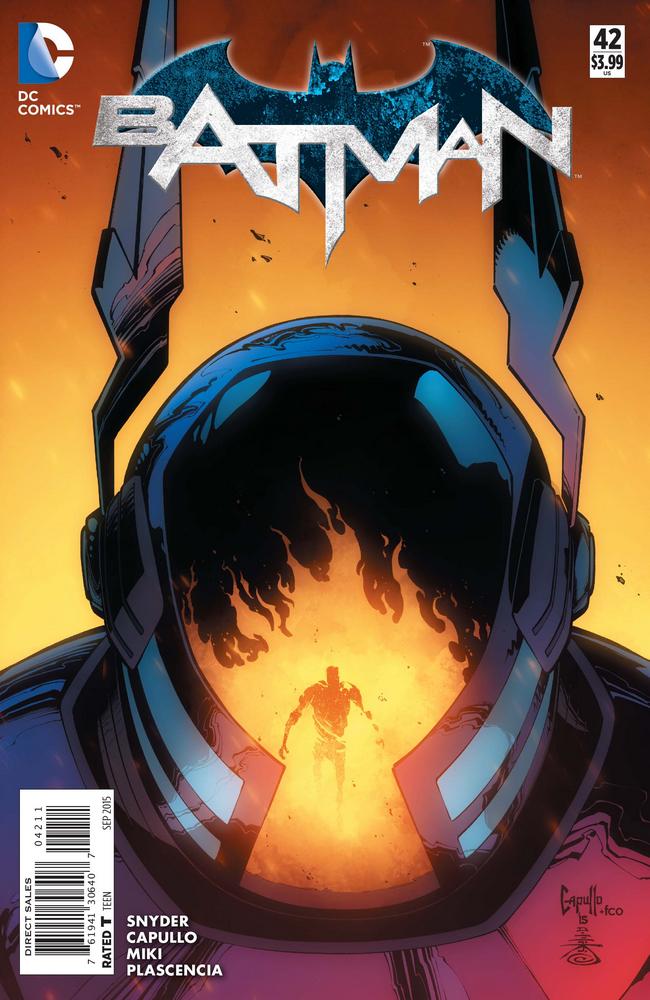 The new era of Batman continues as Gordon and the suit deal with physical threats (and some mental ones) in Batman #42.

Scott Snyder and Greg Capullo have me intrigued by this storyline, as the dynamic between the Bat and Gotham is different than we’ve ever seen before. Having a police officer we’ve all read countless times in the role of Government-Subsidized-Superhero is very interesting and these two storytellers are coming at this from great angles. Going into the mind of Gordon and seeing the internal debate, the questions of confidence in himself to live up to the mantle looks to be a big part of this storyline, and some baggage from his time as Commissioner looks like it is coming back to give Jim a rough time. These two angles definitely give readers a new take on Batman and the support crew Snyder has assembled for Jim is great. Julia is a great foil for the hardened old cop and Snyder writes her extremely well.

Greg Capullo’s artwork is as solid as ever, and his storytelling is superb. His work with facial expressions in this issue is great, and somehow Jim’s personality shines through the armour. By Capullo’s hand, even outside the armoured suit, you can tell that it is Gordon in the Batman costume and not Bruce Wayne. Their mannerisms are different and subtleties like that show how talented Capullo is. FCO Plascencia’s colour work is solid, though muted. I enjoyed the last pages the most as far as colours were concerned, as they popped and engaged my eyes far more than some of the other muted pages in the issue.

Batman #42 is another solid chapter in an amazing saga. I will admit that this issue felt a little drawn out compared to some of the previous ones, but when I hit those final pages my head nearly exploded. Snyder and Capullo are a dream team, and their kick-assery continues with this new take on Batman and #42 is another winner.