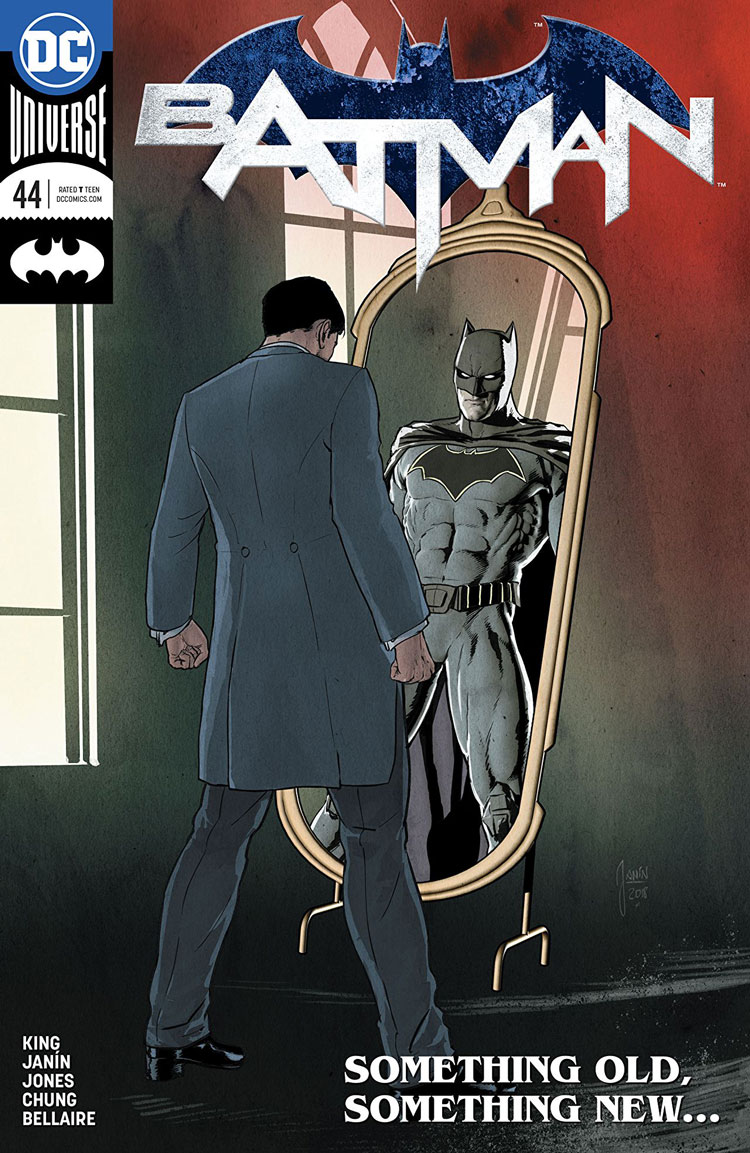 Just like super-heroes and their costumes… there is no bride without her dress.

I’m old enough to remember Batman’s first wedding to Catwoman. Ostensibly told as the secret origin of the Huntress, DC Super Stars #17 opens with the nuptials of the Earth Two Bruce Wayne and Selina Kyle, a union that led to the birth and heroic destiny of their daughter Helena Wayne. It’s a tragic tale, as one must be to inspire the creation of a new super-hero in the Bat-Family, but a touching one. And one that lived on in many incarnations, from dreams and Elseworlds to the development of the modern Earth 2’s Batman as well.

Now, in the wake of this history replaying itself, but in the very central DC Universe, King and Janin are quite literally replaying the greatest hits between the Bat and the Cat — lifting, as has been done in the Mister Miracle series as well, dialogue directly from 75+ years of their tragic romance. It’s delightful in that, surprisingly, it works. That feeling of a relationship that’s seen all obstacles, all ups and downs, all tests of wills between two people… that’s certainly manifest on the page.

Between the dialogue reprise and Janin’s exquisite rendering of a massive history of Catwoman’s costuming, issue #44 has become something of a memory box for me, and I imagine for many fans of the Bat-Cat pairing. The purple dress with green cape is by far my favorite of the designs, a costume that Selina wore probably as long as she’s been in her current leather catsuit (which, by the way, has been a long time. What’s a girl got to do to get a costume change?).

But every design, every silhouette the Cat sported over the years has been uniquely her, and Janin does an exceptional job of reflecting the different aspects to Selina’s personality. And maintaining her actual lithe cat-like form from incarnation to incarnation, sometimes timid, sometimes bold, sometimes ferocious. And never feeling like an object to be eroticized.

In that sense, it’s a treat to have Janin and Joëlle Jones playing metaphorical catch from page to page, as Jones too has a unique respect and sexiness to Selina’s form. Muscular, curvy, but always subject. Always with agency.

And if that weren’t accomplishment enough in the history of rendering the Catwoman, Jones pulls off another brilliant move by delivering on an entirely silent script from King. At no moment does the path to the perfect dress not resonate Selina’s personality, her fickleness on one hand, and her determination for “the right fit” on the other. This isn’t just about a dress, of course (although wowza, can Jones design a dress!), but about the Bat and the Cat. Their history. Their moment.

If you had asked me five years ago if Bruce Wayne and Selina Kyle were meant to be wed, I would have scoffed. But there’s something about this moment. I don’t think it’s just the reinstitution of Superman and Lois Lane’s marriage. Nor do I think it’s about either character having changed all that much. The way King seems to have intertwined their fates feels… right. Their paths finally aligned.

Not inevitable, despite that first wedding that bore the light of a daughter. And not necessarily meant for tragedy either. The Bat is no less the Bat and the Cat (as evidenced by her unorthodox methodology of dress shopping in this issue) is no less the Cat. But maybe, for the first time in a long time, they are moving in the same direction.

If Batman #44 proves anything, it’s that the Catwoman is never just going to be another Batgirl, Batwoman, or Robin. She is her own force of nature, just like her betrothed — and King, Jones, and Janin clearly know it. Seeing how they grow together in marriage — and separately as well — is going to be fun.