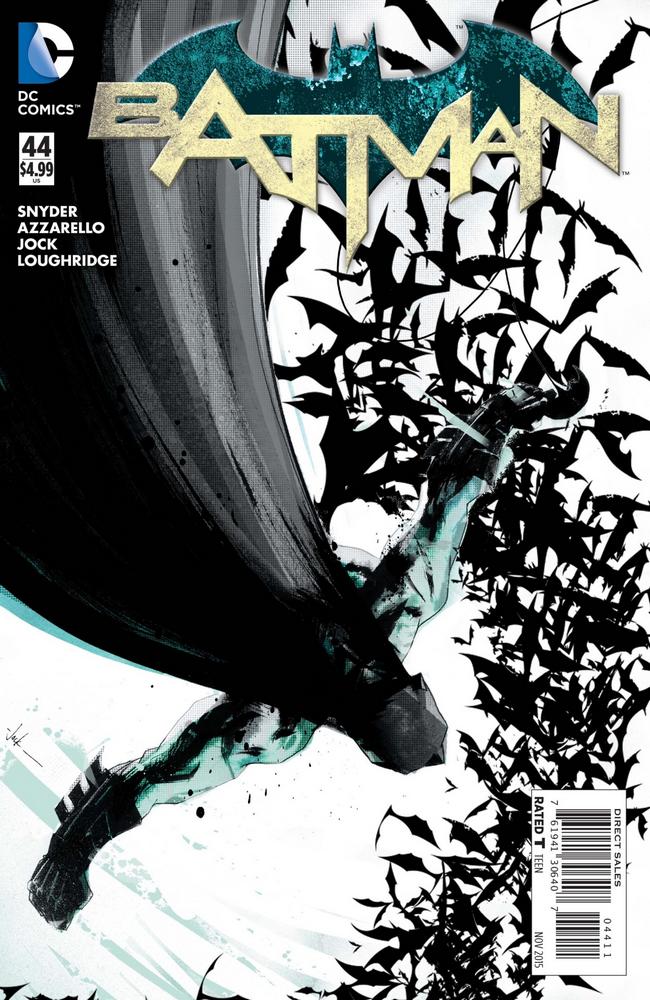 This issue is poignant, relevant to the world today and heartbreaking because of it. Snyder and Azzarello deliver a story where Gotham really is the central character, and those within it are just players here. Gotham is the star here, and these writers play that card brilliantly. Batman’s interactions with The City, his demeanor within it and how he interacts with the gangs and youths even, hits like an emotional hammer and the use of newspaper headlines and clips throughout this issue makes it feel eerily real. This comic, more so than any other I can think of, makes Gotham feel like a major American city facing the growing issues of the time. Snyder and Azzarello relate this fictional character and city to real problems in a way that does not pander but carries an immense emotional weight. I’ll be honest, when I saw this issue was going to provide some background about Mr. Bloom I did not expect this at all. This is no simple origin story for the villain of the day. This is art reflecting reality in a fictional world, and this brilliant script by two masterful writers transcends the medium here, as dramatic as that may sound.

Jock’s visuals take an amazing script and do things I could not imagine with it. This may be the most visually striking comic of 2015, and I do not say that lightly. Jock is no stranger to Batman, or working with Scott Snyder and their chemistry is obvious in this issue. The collaboration leads to something truly amazing here, and as much as I like Greg Capullo’s work on Batman, I have to admit that this is the most striking Batman comic I have read in years. Jock captures the darkness of the subject matter, the truly evil aspects of it and also gives signs of hope with his work toward the end of the issue, capturing the complexity of emotions while simply drawing a kick ass Batman. The iconic Bat is not lost in the mirroring of real world events, and Jock does an amazing job of making Gotham the center of this story. His work is absolutely brilliant and his design work with the newspaper headlines/articles is astounding. I’ve run out of superlatives for to describe his work here. This is amazing visual storytelling at work and Jock is a master of the medium.

Batman #44 hit me out of nowhere, in a good way. Batman is always good, but this is something else entirely. Snyder, Azzarello and Jock deliver an amazing commentary on the world today that is heartbreaking and beautiful while it crushed me with each passing page. This is one of those comics that will be spoken of for a long time and, even if you are behind on the monthly, I highly recommend you grab this issue and experience it. This is not just another comic, this is a work of art.