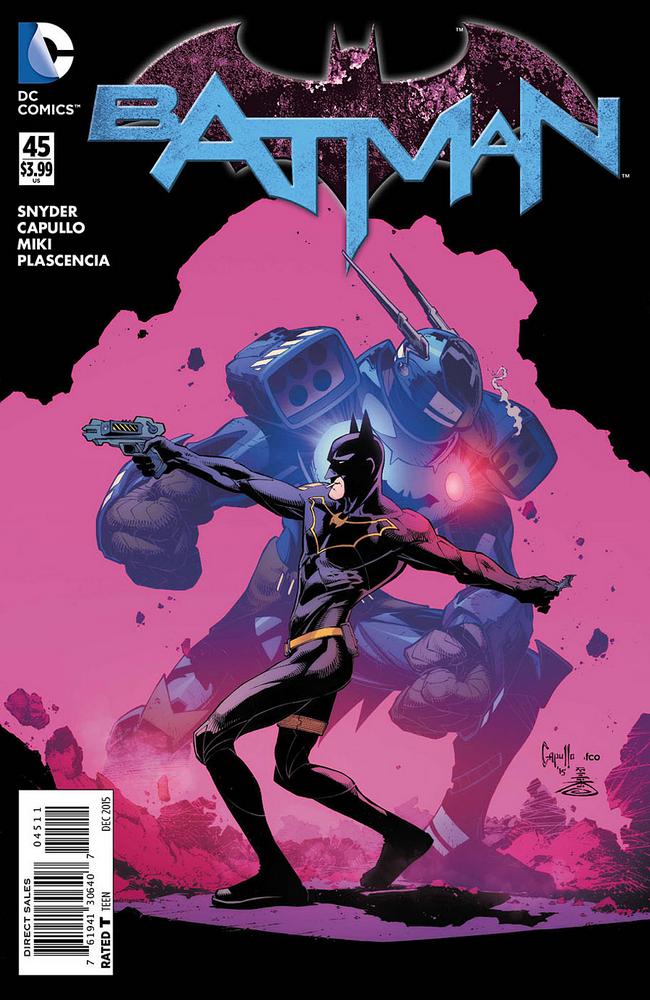 At the end of issue #43, Gordon had himself in a bit of a pickle. Then came issue #44 that blew my mind to the point where I forgot what was going on with the new Dark Knight. Snyder and Capullo throw readers right back into the fray with issue #45, showing Gordon as a problem solver and capable hero who is still getting his footing in this new world he’s in. We also get to see Bruce thinking about bigger things, showing an interesting side of his “blank slate” self.

Scott Snyder has a lot of layers working in this issue, tying in details from issue #44, digging deeper into the psyche of Jim Gordon as he deals with the new realities of being Batman and showing an interesting side of this new Bruce. The idea that both Gordon and Bruce are, in some ways, falling into some of their old traits intrigued me, especially where Bruce is concerned. The two inevitably being who they are, even in their new roles, is comforting, somehow. Snyder is letting details fall into place slowly for this pair while the mayhem of Mr. Bloom rampages around them and the dichotomy between the slow aspects and the wild danger of this foe makes for a really interesting story.

Greg Capullo’s artwork is as rock solid as it has ever been in this issue. His attention to detail is amazing, with Mr. Bloom being absolutely terrifying and Gordon owning the suit more and more by the panel. He’s becoming Batman, or maybe Batman is becoming him, but nevertheless it is obvious that it isn’t Bruce in the suit and it doesn’t look awkward. Capullo’s work with the suit is better than any other artist I’ve seen thus far and even with the “rabbit ears” that thing is seriously fierce. Capullo’s work on the final pages of this issue elevates Bloom to Joker levels of terrifying and I’m very intrigued to see what he puts in front of our eyes next.

Batman #45 is a solid issue with some intriguing story elements. I like the angle that is being taken for both Gordon and Bruce thus far and I’m looking forward to reading the fallout of the hell that has breaking loose. 45 issues in, Batman‘s still flying high.