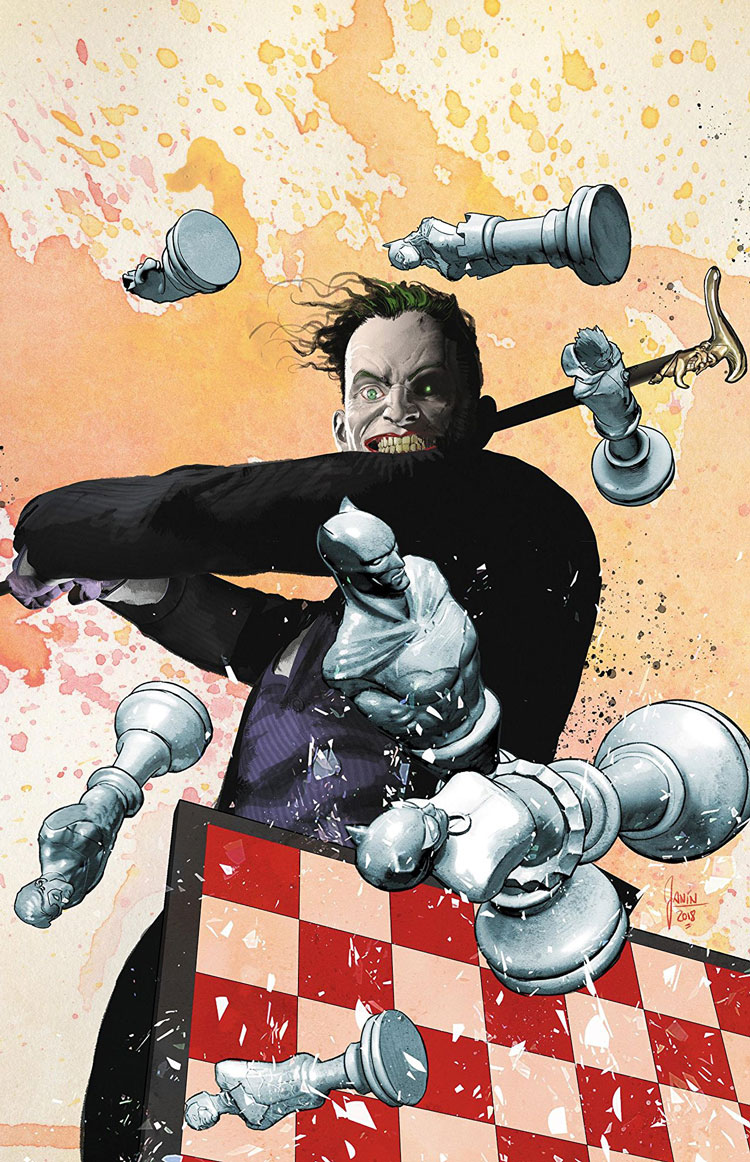 Am I the best man?

The Joker has interrupted a wedding to a devastating degree, leading to our famous Bat to crash the scene. After a few rounds of fisticuffs, the infamous jester has a humbling request for his foe, though as usual things end up in a state where someone else has to intervene.

I think this story represents some of Tom King’s best talent for storytelling. His skill and specific style is evident through this issue’s pacing, plot, and grasp of characterization. We technically have three major players, Joker, Bruce, and Selina, and King effortlessly melds their personalities into the story. Joker weaves his own tale, full of the common twists and turns and repetition that make him increasingly unnerving. Bruce doesn’t speak, his part of the comic told through his reactions to the Joker, some typical and some surprising.

In the closing pages, Selina shows up, jumping onto the scene to save Batman’s ass like she has been for the better part of a year. King makes a story that is fraught with tension, even as we do not see most of the violence head-on, and puts the characters into a scenario where the right parts of their personalities emerge.

Mikel Janin’s style works well with King’s penchant for moment-by-moment storytelling. The Joker is ostensibly the star of this issue, and we see him move through his typical phases of madness and psychopathy to something that resembles authenticity, at least comparatively for the character. Janin holds a mastery over architecture and detail, best seen in the opening and final pages where we see the outside of a Gotham cathedral, ominous in its presence as it holds scenes of intense violence. The fight between Bruce and the Joker is excellently choreographed, punctuated not just by the former’s silence, but the Joker’s emotional journey through the story.

June Chung colors Gotham in a strangely bright yet neutral sheen. The concrete of the cathedral, the towering buildings around it, form a sort of shell that houses the events which transpire through each page. The focal point shifts through Chung’s work, highlighting the first victim of the Joker that we see in the initial page, with Selina’s presence in the final page as a bookend, a dark image against the soft, cool colors we see as the comic pans out to a wider Gotham for a second time.

Inside the church, the Joker’s purple immediately marks him as an agent within this story, the one who is pushing each subsequent occurrence into existence. Bruce himself doesn’t quite catch our attention, his cowl and suit blending into his surroundings. This dynamic gives a startling amount of attention to the Clown Prince of Crime, particularly as he becomes more pensive.

One of the major things that stuck out to me was the setting of this story, and not in a way that is very comfortable. In Pride month and on the heels of the anniversary of the Pulse shooting, occurring at a place that is often the only sanctuary for queer and trans people, as well as the fact that the primary violence we see actively enacted seems to be against people of color, many of whom find churches a similar sanctuary, the murders in this issue hit close to home. I’m not sure whether to chalk this up to carelessness or whether it was deliberate from a storytelling aspect, which will need a significant defense for me to feel okay with, but while this team’s abilities to tell a story are stellar, maybe this time we could have used some different imagery.

I mention this aspect of the story because we are far too often confronted with the deaths of marginalized bodies. Yes, there appear to be white people dead on the floor, yet we see the pained, agonizing deaths of two (seemingly) visibly people of color. We are no stranger to this, for the aforementioned reasons, but because of white supremacists like Dylann Roof, who killed nine black people of varying ages in their place of worship, and Thomas Edwin Blanton, Jr., Herman Frank Cash, Robert Edward Chambliss, and Bobby Frank Cherry, who murdered four young black girls in a Birmingham, Alabama church (which makes the bomb in the cross a less than awesome move), and countless other acts of violence against black people and people of color.

The vulnerability inherent in the story, an attack on the day that many deem their “happiest,” is one thing, but the optics do leave a bit to be desired. We know who the Joker is, we know what he is capable of. I’m not quite sure the story had to play out like this for us to get what it was saying, and the overlay of this issue of Batman with current events and our current month is maybe more unsettling than necessary.

Reading Batman #48 as a superhero fan but also as someone coming from axes of marginalization is a complicated experience. I like a lot of the story beats and I feel the creative team flexed some artistic muscles in executing it, but there are particulars that don’t sit well with me. That is the glory and the bane of analysis: not only do pieces of media exist in their own context as a story, but they do also exist as parts of our reality. It is undeniable that we cannot fully divorce fiction from reality. Thus, this story has an excellent structure and overall plot, but some of the specifics don’t quite land.