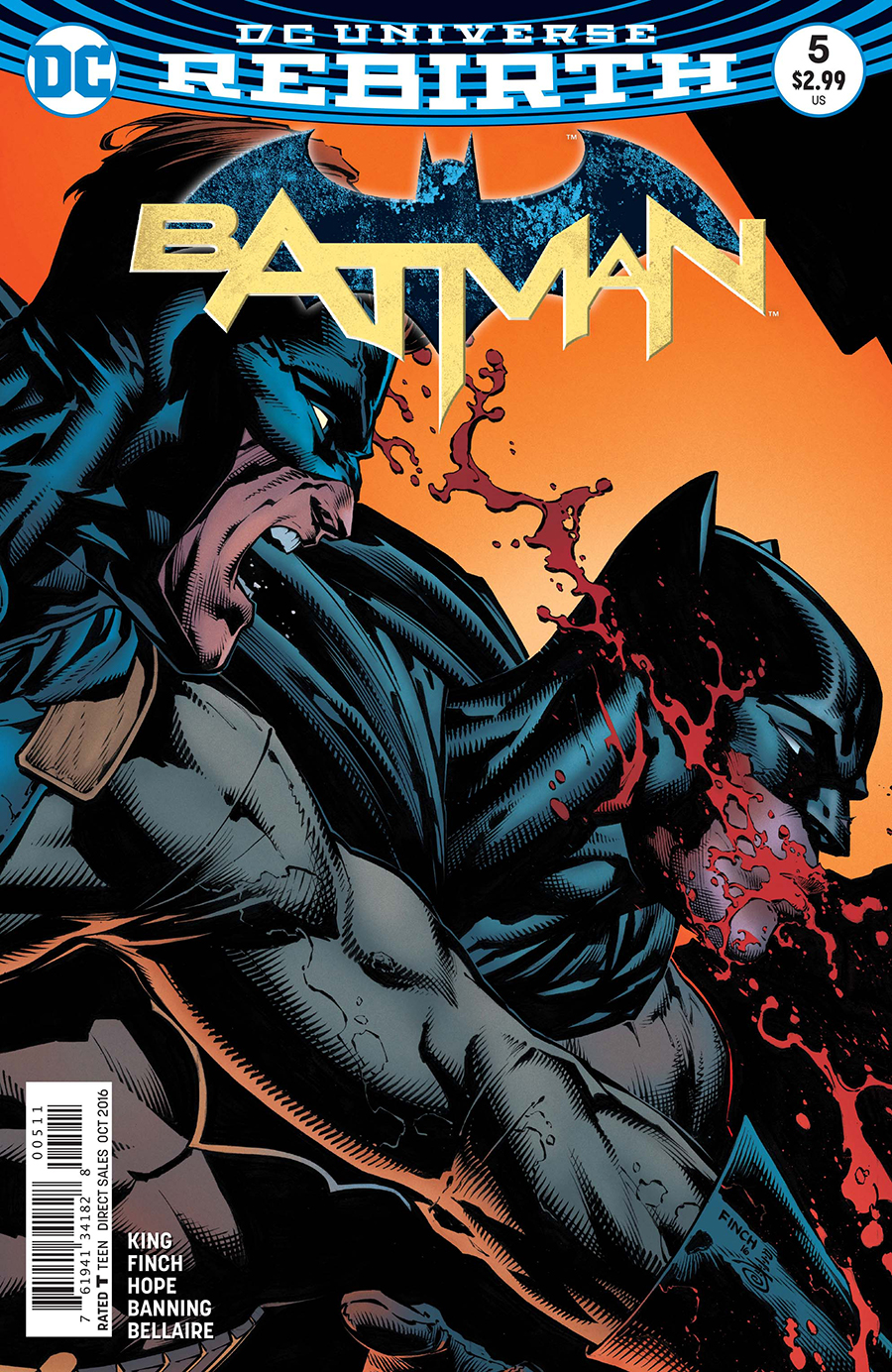 Written by Tom King with art by David Finch and a half-platoon of inkers, colors by Jordie Bellaire, and words brought to the page from legendary letterer John Workman, Batman #5 opens with a superhero landing and a destroyed Batmobile, striving to make this comic book as cinematic as possible. Gotham has a mad-on and he’s determined to take it out on the city that gave him his name.

Except for one minor challenge: Batman has made it quite clear Gotham is his city.

King amplifies the pacing of Batman #5 to manic levels, making the story half-chase, half-suspense, half-superhero battle royale (yes, I know that’s three halves), but all explosive. The story bounces between Gotham-on-Gotham violence, Gotham Girl’s struggle to check her emotions following the Psycho Pirate’s manipulations, Duke’s attempts to help Gotham Girl, and Alfred’s hilarious monologue tinged with regret for accepting the duties of looking after young Bruce Wayne. King provides a wide array of personalities to the page, tweaking each in his own particular way while being reverent to history.

Finch is given more than his fair share of rubble to draw, but also has plenty of other items to show readers, from Alfred making a rather surprising fashion choice to a Batplane crashing down into the Gotham City equivalent of Times Square, to an impressive collection of guest stars. Some of his over-the-top choices go a little too far to sell a scene that could be just as powerful in a slightly more subtle manner, such as when Batman kicks Gotham in the face, the backwards tumble makes it look as though perhaps Gotham’s head has been physically displaced from his body. There’s plenty of motion and action throughout, with a few bobbles, but there is certainly no mistaking the pace of this comic book.

His inking crew does well by Finch, but some areas seem more rushed and scratchy than others. It all fits the story, as this is a fierce battle in the middle of a densely populated city, but it’s not as pretty as it could possibly be if the schedule were a little more kind to the creators between issues.

That said, Jordie Bellaire does a remarkable job of cementing all of the pieces together through color. Her color choices just make sense, which may seem like it should be a given, but the fact that I’m mentioning it perhaps lets you know otherwise. Bellaire has a smart grasp of color and always presents a snappy palette as dictated by the story. In this case she uses flat, vibrant tones with only the required amount of gradient to add depth and dimension. The flatter tones harken back to Silver Age comics nicely, reminding readers that, yes, Batman is a superhero living in a superhero world. There is a lot of gray, dark blue, black, and brown present in Gotham City, which makes the bold city signage and bolder clad characters pop out from their backgrounds.

John Workman has assimilated nicely into the lettering assignment for Batman, but modern tools don’t allow for his sound effects and even word balloons to carry as much brand recognition as he projected in his 1980s and 1990s work on titles like Thor and Doom Patrol. There are still bits present, for the savvy Workman fans reading Batman #5.

The ending, while appearing conclusive, doesn’t feel satisfying or, well, even like an ending. This is Batman’s comic, but he’s just standing to the side, an afterthought in a panel that should be more fraught with emotion, especially given the rollercoaster ride that “I Am Gotham” has taken us all on.