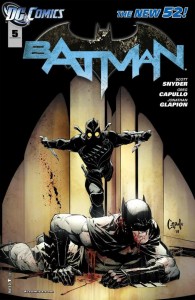 This is a superhero comic unlike any other in the market today. This issue is truly a comic to not just be read, but rather experienced. Very few comics actually invoke a physical response in a reader, but the meticulous Batman #5 is one of them.

Scott Snyder does not use cheap theatrics or shock value to invoke the response, but rather takes us inside the mind of Batman and the mental breakdown he is having with the maze of the Court of Owls. As the issue progresses Bruce falls deeper and deeper into madness, and Snyder’s choice of words and phrases is so precise and perfect that I was completely engrossed in this issue from the moment I saw the maze until the last page. I literally could not put it down – my focus was grabbed and never allowed to wander. I found myself baffled by each turn Bruce takes throughout the maze, as the riddle (perceived or real?) gets more and more puzzling and the end of the issue truly shocked me. I cannot think of a comic in the recent past that has thrown me for such a loop (in a good way) and that the second I finished it I started reading it over again. This is a fantastic chapter in what has been the greatest Batman arc I have ever read, and I do not say that lightly.

Greg Capullo’s art is equally as powerful as Snyder’s script in this issue. One does not work as powerfully without the other, and when you combine Snyder and Capullo you get nothing but magic. As the pace of the issue becomes more frantic Capullo’s art evokes it perfectly and the layouts of this very unique issue made me feel like I was in the maze, with an assassin lurking at every turn. This is some of the best art in comics people, look upon it and behold it’s glory.

To close, I want to applaud Snyder and Capullo for taking risks with this title and storyline. This issue in particular is by no means a ‘typical’ superhero comic book – this is outside the norm and brilliantly executed.

Pros: Masterfully executed script and art. A comic to be experienced, not just read.

Cons: None. Flawless execution by two creators that are putting out the best title from DC Comics, without a doubt.