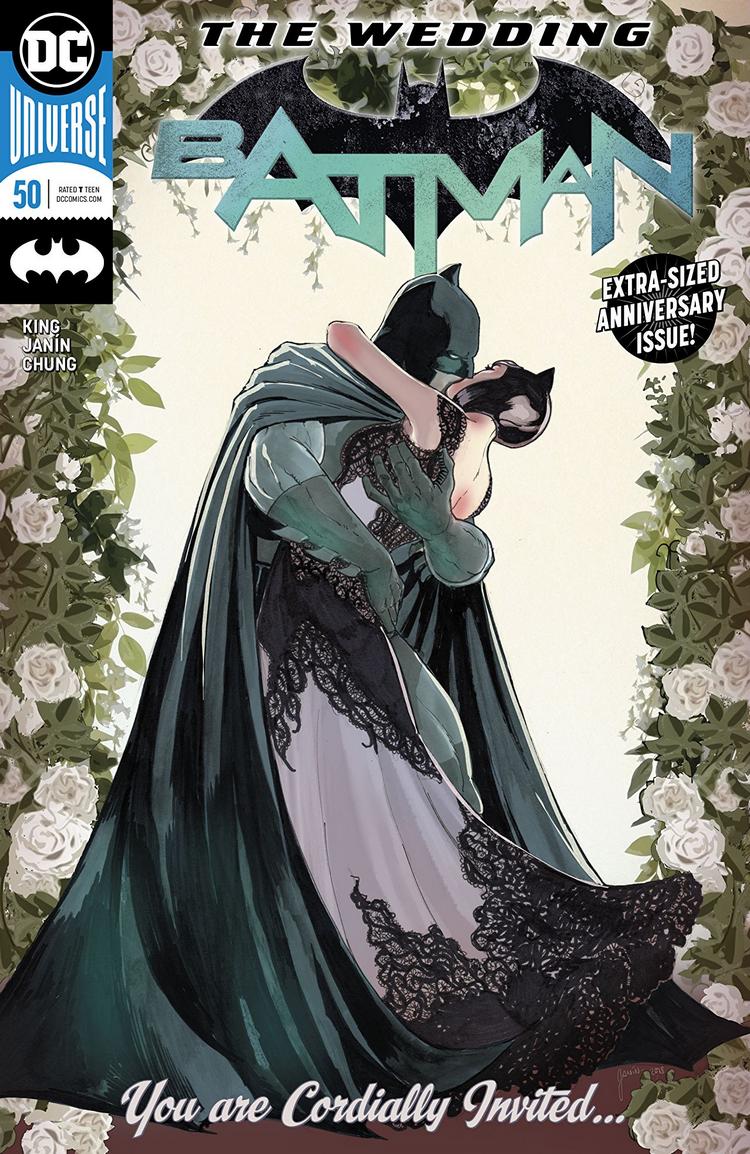 Batman and Catwoman’s literal almost eight decade tango brings out the romantic in everyone, even for those who don’t want to admit it. Their relationship proves that there is someone for everyone, despite the character flaws, trust issues and dead parents. In all honesty it’s a win for us all. So it is no surprise when Bruce Wayne asked Selina Kyle to marry her and she accepted the proposal in Tom King’s Rebirth run, shippers of the Bat and the Cat were extremely ecstatic. It felt like your best friend or a family member was getting hitched and you were joyfully along for the ride, ready for their big day.

While you may have let out a huge “FINALLY!” when these two became engaged, in the back of your mind and probably in your heart you had a fear that something is going to stop this union. Could it be Joker who can’t accept anyone having the Dark Knight’s attention but him? Could it be hesitation from the happy couple? Or could it be the simple fact that Batman is…Batman? And this could mean the end of…Batman? Perhaps it’s a little bit of everything. What is certain is this special event, for better or for worse, was celebrated in the most beautiful way possible by some of the greatest Batman and DC Comics artists to date. Tom King’s anniversary issue zooms in on what makes the Bat and the Cat a couple to ship, which also is the reasoning for their inevitable downfall.

The Look of Love…is In Your Eyes

Batman and Catwoman decide to have their big day in a small way, solely including closest friends and family. As they get ready at Wayne Manor, Bruce and Selina separately reflect on what this union means for each other’s futures and if it will truly fulfill their happiness and respected destinies.

Writer Tom King in his DC Rebirth run has been adding to the Bat and Cat narrative that started back in 1940’s Batman #1 story “The Cat” written by co-creator Bill Finger. This issue obviously isn’t the first or last tale of Batman and Catwoman’s whirlwind romance. However thanks to over a dozen artists, King’s writing is able to capture what Bruce and Selina’s relationship has meant over the last 78 years through the use of several literary tropes – one being the eyes. The concept of the eyes are the windows into the soul has never applied better within a story of the Dark Knight. The Bat and the Cat understand what it means to be a creature in the night where others they encounter easily misunderstand the rush each experience in their costumed lifestyles.

Each page King pens focuses in on Bruce’s understanding of Selina – a woman that is more complex than a common jewel thief – and Selina’s understanding of Bruce – a man that is more than just a guilty conscience. As both Selina and Bruce reveal why they are compatible with one another, this connection can also mean disaster for Catwoman and Batman; In this universe, your costume vs civilian persona are as different as night and day and have to be treated as practically different entities. King heartbreakingly treats this reality as delicately as possible, resulting in a conclusion that is both frustrating but beautiful at the same time.

An Illustrative History of Romance

Despite the craziness over spoilers hitting the internet several days before Batman #50 hit comic book stores, the illustrations provided by almost three dozen artists is perhaps the BIGGEST and BEST surprise of the entire anniversary issue and is a huge reason why the book is a MUST read.

Legendary artists contributed to capturing the many, many different eras and continuities Batman and Catwoman have shared. José Luis Garcia-Lopez and Andy Kubert’s purple and green Catsuit for Selina calls back to the Silver and Bronze Age of DC. Frank Miller’s characteristically gritty take on the two love birds reflects Bruce and Selina’s fan favorite dynamic from “Year One”. Tim Sale’s vibrant purples and stark pencils highlights the love story from Jeph Loeb’s “The Long Halloween”. Amanda Conner’s couple having a playful time with tigers at the Gotham City Zoo, Mitch Gerads’ lovers having a frantic tumble on a snowy rooftop, Clay Mann’s adorable double date with Superman and Lois Lane and a dozen other scenarios featuring Batman and Catwoman all highlight the character’s wonderfully complex relationship over the years.

As these artists share a history of the Bat and the Cat, Mikel Janín, June Chung and Clayton Cowels bring the reader in to the day of the wedding. From Selina’s green cat eyes filled with excitement and worry to Bruce’s nervous stares and expectations, to the details of the bride’s dress and groom’s tux, each panel was a visually stunning build up to the moment everyone has been waiting for ever since Bruce got down on one knee. Tom King’s writing completes every pages’ striking visuals, but the seriously amazing artistry is worth picking up a copy of the book all by itself.

The Eternal Cat and Mouse Game

This comic is stunning and a little irritating all at the same time which surprisingly results in an outstanding read. What you take from this anniversary issue is simple: if you love someone, all you want for them is to be their best self. Whether or not you are upset or content with the ending, Batman #50 showcased that the Bat and the Cat know that loving one other means accepting each other’s true destiny, even if their own personal happiness is at stake.

While Batman #50 was a rollercoaster of emotions within the DC Universe and for readers all over the world, the art and the dialogue absolutely did not disappoint. The love story between Bruce and Selina, like it has been proven time and time again, will continually evolve like the beloved characters themselves.