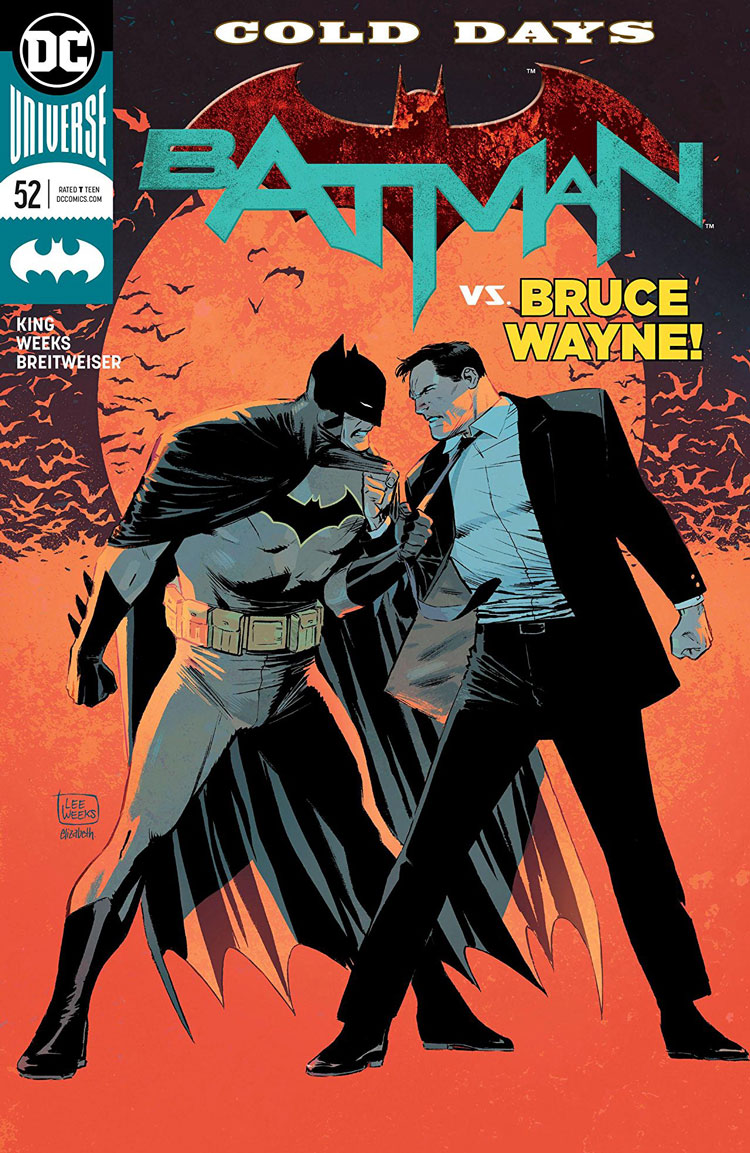 Has someone you loved ever left you?

You recoiled into yourself.

You recoiled and you retreated, because you were unmade.

You needed to be in the dark because you had to think. Could you carry on living the way they taught you? Should you revert to your default settings? Should you forget them? And most frighteningly, should you become someone else? Someone else, because the person who knew every thought and action, understood every fear and desire, and could map every corner, every trench, and every scar of your being said, “not you.”

Regardless of which option you chose, you isolated yourself because you lost a limb. You needed to learn how to fight without your left arm.

Batman #52 is about what happens when you can’t be alone during this time. When life takes you and your bleeding stump of an appendage and thrusts you into a public forum where you have to smile.

Or in Batman’s case, life sends you to jury duty.

For Bruce, Selina leaving him at the altar wasn’t just more collateral damage that comes from wearing the cowl. It’s an outright condemnation to forever wear the cowl. After all, she left because she realized that the world would always need Batman, Bruce would need his pain to be Batman, and therefore if Bruce was happy – Batman wouldn’t exist. So she split and Bruce is furiously broken. And now, he must process all of this during jury duty. Tom King is a genius.

The story has three discrete yet compounded layers of conflict. First, there is the trial of which Bruce Wayne is a juror. Mr. Freeze is being tried for the murder of three women and jury must decide if the confession he gave to police was truthful or coerced due Batman brutalizing him. Second, there is a mysterious “other” who allegedly warned Mr. Freeze that Batman was hunting him, assuring their conflict, and may be the true killer.

And third, Bruce, again, must hide his sorrow and anger, quietly heal the wound Catwoman left, face the horror and shame of what he did to a possibly innocent Mr. Freeze, and in a stroke of diabolical irony, must convince the rest of the jury that Batman isn’t infallible. Oh, and Dick Grayson is filling in for Batman while all of this is happening.

King masterfully balances and advances all of these plot threads. Bruce’s dialogue is laced with a palpable self-anger as he tries to convince his co-juror’s of Freeze’s possible innocence. His words are filled with crestfallen dread as mundane conversations with other jurors revolve around the importance of Batman to the world. Until Bruce’s strife and turmoil festers and crescendos with a breathtakingly violent diatribe detailing why he lost control and brutalized Freeze.

But King’s words would be but words with out Lee Weeks’ art. Again, this entire arc is based around a claustrophobic dissection in Bruce’s current mental state, and to do this Lee utilizes deliberate pacing, paneling, and facials to excellent effect. Bruce’s arguments are layered over wide shot pages and panels that showcase Batman’s wanton brutality. Each nameless juror is given distinct features and ticks to display the full extent of their frustration at the prolonged trial proceedings. And the way Lee is able to simultaneously draw Bruce as composed yet furious is simply a marvel in illustrative storytelling.

The book is a beautiful disaster. King and Lee capture what may prove to be the most trying time in Batman’s publication history using the mundane banality of jury duty. They progress both the most pressing conflict of Bruce’s fragile mental state and King’s overall end game with this current run. This is a can’t-miss arc in King’s character defining run on Batman.