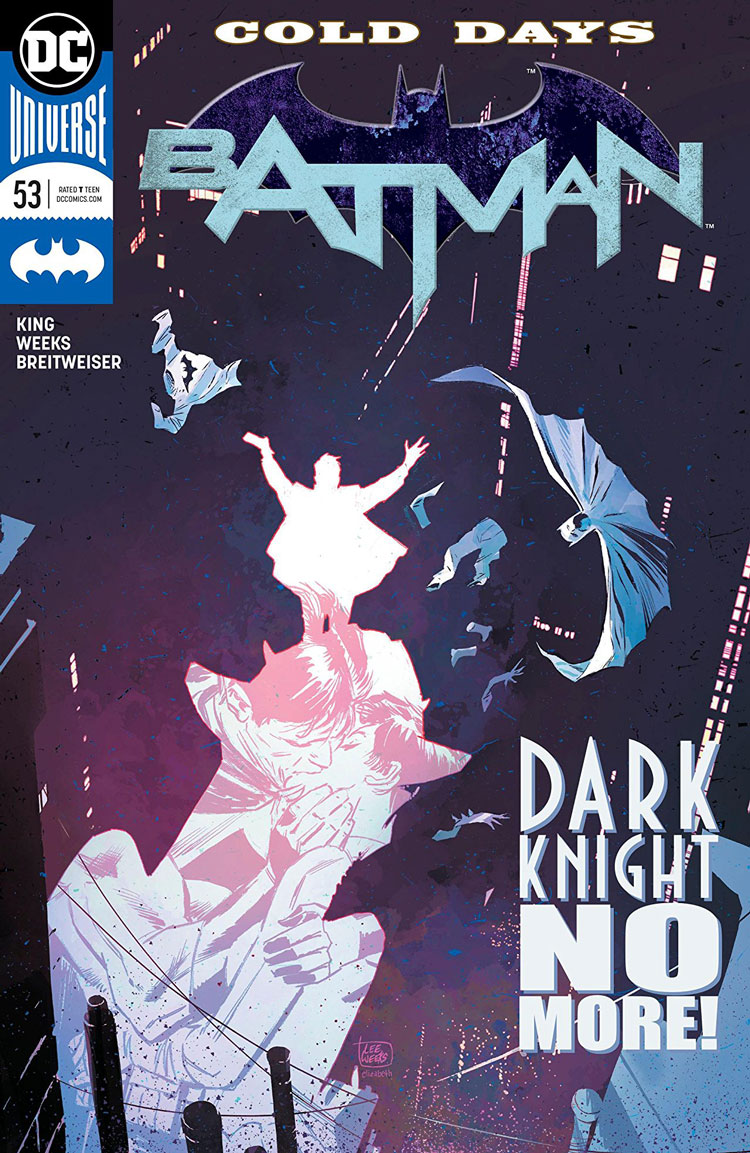 Batman #53 is the cathartic climax to the “Cold Days” story and sees Bruce Wayne resolve to rebuild himself from his lowest point.

Still reeling after Catwoman left him at the altar, Batman has given up hope on being happy, channeled his anger into the cowl, and brutalized Mr. Freeze after the mere suspicion of his connection to a series of murders. Mr. Freeze was coerced into a confession by The Caped Crusader and now Bruce Wayne must face his mistakes and himself as a part of the appointed jury trying Freeze’s case to exonerate a man that he unjustly attacked.

King is using this arc to materialize Bruce’s existential turmoil. He must convince his co-jurors that Batman is, in fact, fallible by, in a fervor of diabolical irony on the part of King, admitting to himself how lost he has become. King accomplishes this citing the Book of Job. Citing one of Christianity’s most hallowed and referenced text, King brings Batman to his absolute lowest point by creating a parallel between how Job questioned The Almighty and how the people of Gotham view Batman, Bruce is able to convince the jury that Batman does in fact make mistakes and Bruce realizes that he must rebuild himself.

Honestly, this is why writer Tom King recently won an Eisner award.

It’s hard to overstate King’s accomplishment with this issue. He uses a religious text to bring meaning to a comic book character. Yes, he’s writing Batman and he stands apart in pop-culture but it’s a preeminent religious text that is a foundation of Christianity as a whole and, honestly, it fits.

Think about that. The dialogue is potent, nimble, and devastating but all of that pales in comparison to the feat King accomplishes by using religion to give meaning to Batman’s current state of depression.

Weeks and Breitweiser finish the arc very strongly. Using the same strategy employed in #52, they expertly pace Wayne’s diatribe to overlay Batman’s actions against Freeze which painfully depicts the depths of Bruce’s despair. Whether it’s the depression in Bruce’s face when he thinks of Catwoman, the desperation when he admits that he put too much faith in the cowl, and his exasperation when he begs the jury to acquit Mr. Freeze, Week’s art draws a never before seen picture of Batman’s defeat.

I only have one qualm with this arc as a whole: not enough time with Dick Grayson as Batman. It was revealed in issue #51 that Grayson was filling in for Batman and it was a welcome return to the cowl for anyone who had remembered his tenure during Grant Morrison’s legendary run. However, we never saw him past that issue.

There were hopes that Grayson would be given some time under the cowl, especially since King teased an outside force that was manipulating the jury by inserting a mole amongst them. This was a seemingly perfect opportunity to give Grayson a sub-plot yet, King chose to leave this unresolved to focus on Wayne’s existential crisis.

“Cold Days” is a can’t miss, instant classic arc. Yes, it was a missed opportunity to not showcase Dick Grayson as Batman more, but it gave us a broken, defeated Batman that we have never seen before. This story will be remembered for years to come.