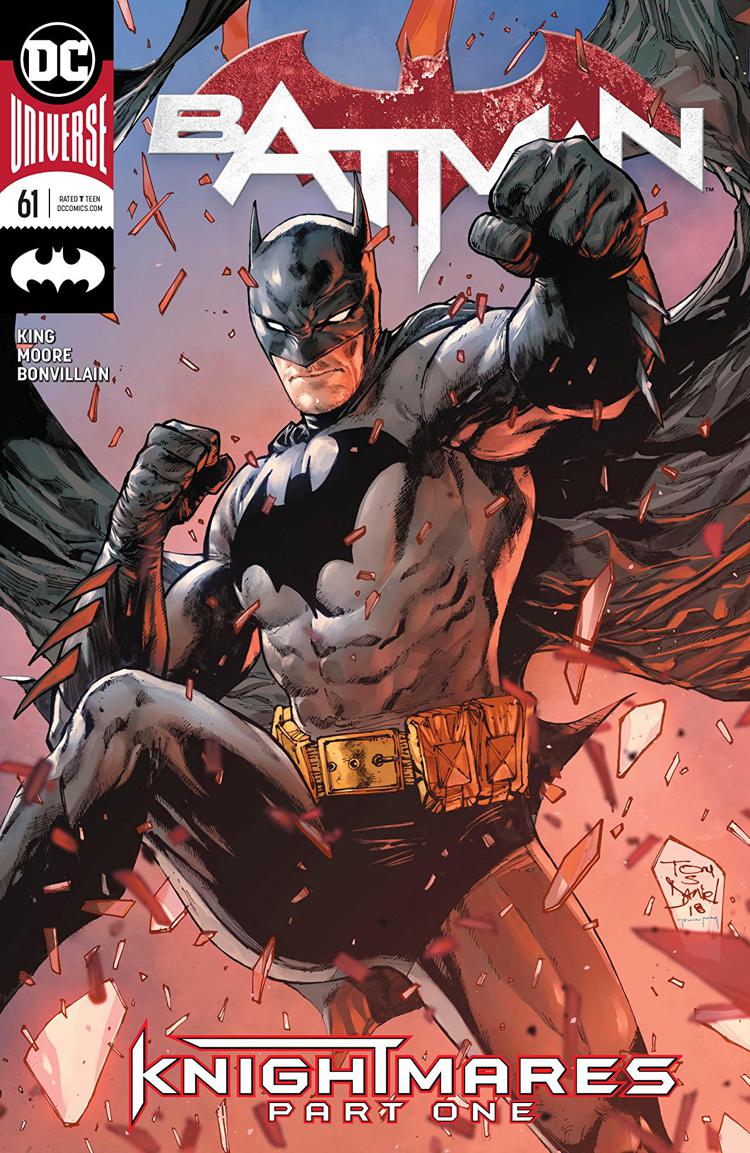 Batman #61 is yet another devastatingly disturbing cut in Tom King’s surgical dissection of The Dark Knight’s psyche.

After the cataclysmic cliffhanger of Batman #60, King choses to change gears and return to the subplot of the deranged Matthew – the child from Batman #38 who orchestrated the death of his own parents because of a sick obsession with becoming Bruce Wayne. This present issue is Matthew’s psychotic daydream. King ushers us back to the moments immediately after Martha and Thomas Wayne have been gunned down where we find an 8 year old Bruce Wayne lathered in the blood of his parents. The issue then, strangely but curiously, takes us through Matthew’s delusion as we see Batman try to solve the Wayne of the murders as the fever dream reaches a violent climax.

Yea, all this Matthew stuff is filler but it is important filler.

Remember, Tom King’s entire run is trying to answer one, singular question: “Can Batman be happy?” And to answer that question in whole, King must have the audience examine who Bruce Wayne is without the trauma of losing his parents, whether that was trauma is necessary to fuel him to be Batman, and whether that trauma justifies his vigilantism and he’s doing all through the eyes of Matthew. Matthew is a dark parody of Bruce Wayne. He’s a depressive and angry character that believes his tragedy is so important to his being – that he actually manufactured his own. His very first appearance left us with a haunting realization that Bruce Wayne was nothing more than a “…sick kid with dead parents” and is seen in this issue causing carnage in the name of his tragedy. King, in short, is asking us “yes, this kid is a psychopath but how far is he from Bruce Wayne.”

It’s cliché at this point to critique Tom King’s work. King’s plotting is stellar, his scripts are all at once engrossing, haunting, and unforgettable, and every issue gift us a new revelation on Batman. Travis Moore and Tamra Bonvillain are on art duties and together opt for a hyper realistic depiction of the issue’s proceeding that complements the harrowing physical and emotional turmoil of the issue very well. Moore’s facials are of particular importance to the issue as he expertly draws Matthew’s face with a psychotic malevolence that readers won’t soon forget.

Make no mistake, #61 is yet another home-run for Tom King’s body of work however, it simply isn’t required reading. Matthew’s subplot is, again, important for King’s treatise on Batman. He’s a dark reflection that readers need to see to understand King’s argument regarding The Caped Crusader but this story could have easily been condensed into a portion of another issue. This issue is mechanically and thematically very strong but King simply didn’t have to use a whole issue to present Matthew.