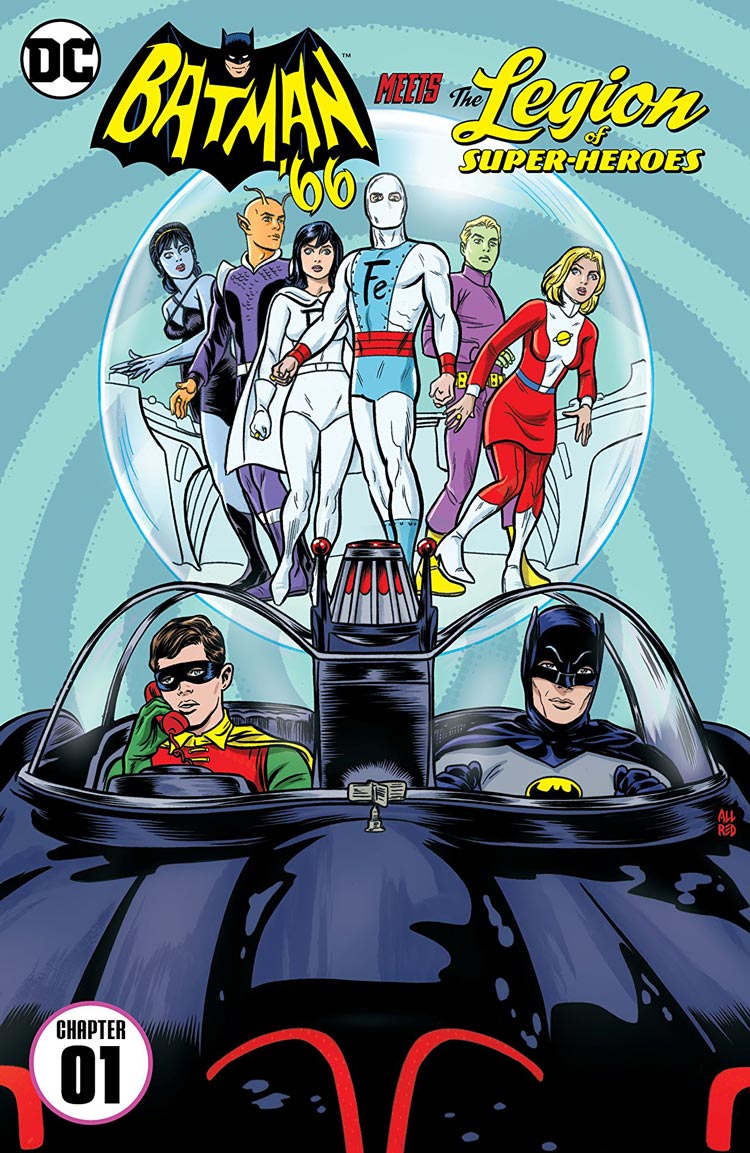 In a time-altering one-shot to end the long-running Batman ’66 series, the Allred clan bands together to create a crossover comic of the century (and the next!). This is easily the most upbeat comic I have read in months. I was laughing out loud in the coffee shop — an embarrassing thing that does not happen often, especially with a DC comic. This one-shot is a perfect embodiment of the 60s era Batman, and the perfect send-off for our blissfully outdated heroes.

In Batman ’66 meets The Legion Of Super-Heroes, the team of future space-teens from the 30th Century travel back in time to recruit the greatest hero in history — Robin, The Boy Wonder? Batman and Robin work together with the League, traveling through time to fight two classic villains who seem suspiciously similar…

Michael and Lee Allred team up on the dynamic storytelling, bringing the timelines of past and future superheroes together in one fun romp! This issue does a perfect job of including enough background and exposition to introduce new readers to the scene, while keeping the story moving quickly enough to entertain veteran readers. If you are not familiar with any of the characters, this is a fun read that doesn’t require any extra research or reading. The entire issue is a complete story, modeled adorably after a Batman TV special, making it a very entertaining one-off read.

For fans of Michael Allred, it is no surprise that this comic is full of puns, jokes, jaunts and outdated space-slang. The 1960s cartoon vibe really shines through in the storytelling. Michael and Lee also manage to perfectly capture the iconic voice of Adam West (RIP, the one true Batman). Bat-puns are abundant, adding a smile to every page. The space-teens of the Legion of Super-Heroes might not be impressed with Batman’s junky old technology, but the 60s-era humor carries through the entire Issue and brings a nostalgic tone to the book.

The great Laura Allred is on colors, and I have absolutely no complaints. The vibrant hues and style add to the nostalgia of vintage comics, which is absolutely perfect for this story. Wes Abbott adds the same vibe to his letter art, including some classic SFX and hand-letting vibes. The art for this book is fantastic. Heavy lines and retro-styled backgrounds and outfits make this book feel like it could have been picked up years ago, which is a pleasant departure from the darker, more modern DC books on the market today.

Overall, this comic feels like a Batman TV special, and it is enchanting. The Legion of Super-Heroes is familiar (though you may be surprised by some of the members!) and the premise for this comic is cute and funny. This is a great comic to pick up for a quick laugh and some solid Batman nostalgia. I wish this was a cartoon, or at least an ongoing series, but it is a great conclusion to the Batman ’66 series, and a perfect homage to the late Adam West.