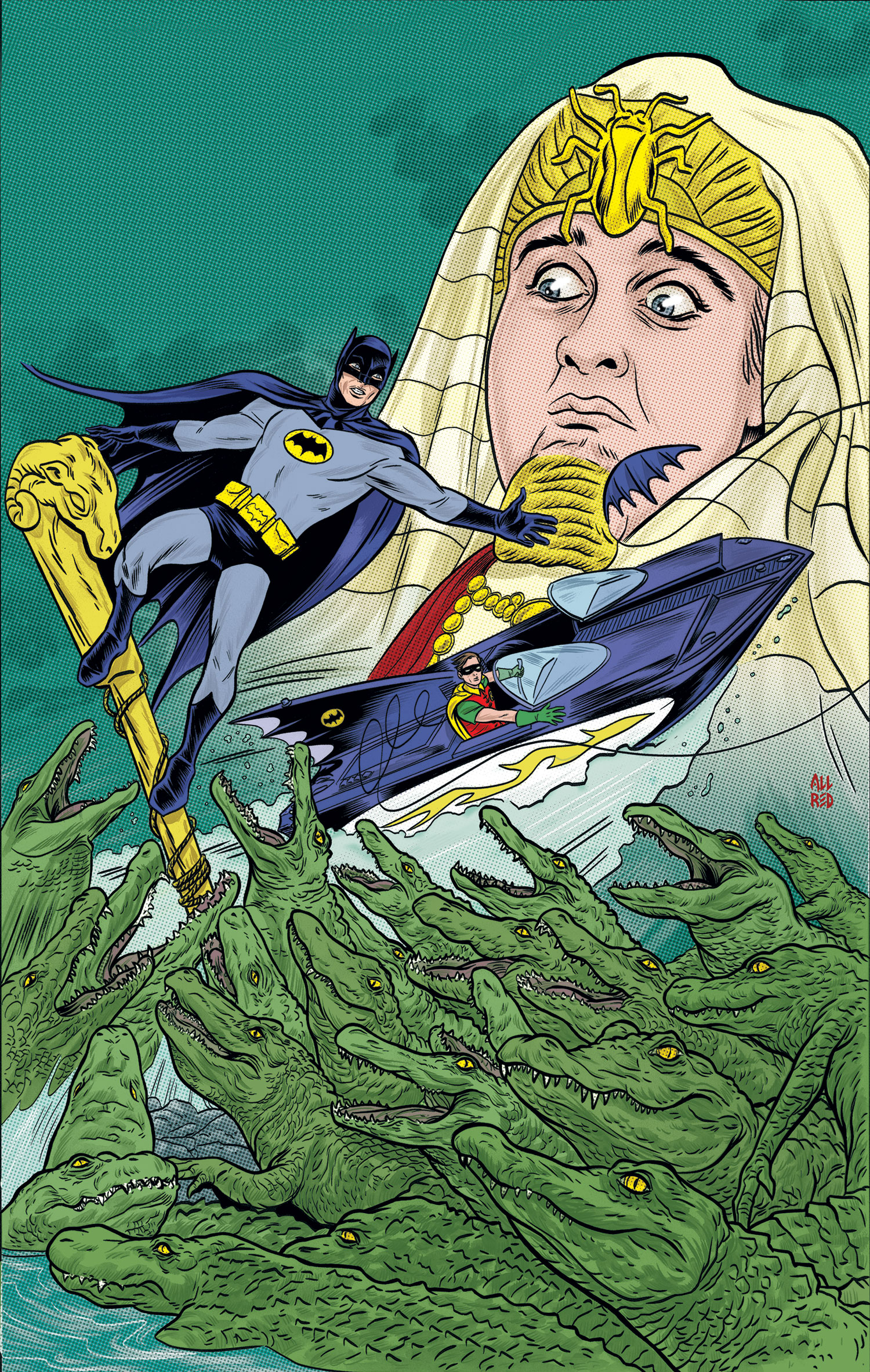 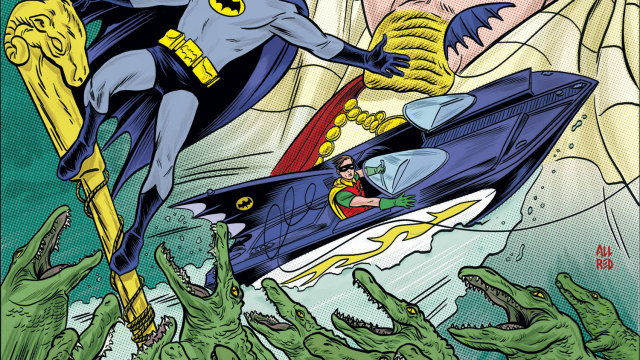 The adventures of Batman and Robin have never been so crazy as those set in their sixties fantasy world. Mimicking the art and style of the television series some of us caught as a kid (and if we didn’t, our parents certainly did), Batman ’66 delivers a not-so connected thread of outrageous adventures week in and week out, just like it did so many decades ago. The only difference here is, these stories remain genuinely fresh and timeless in their four color representation — much more so than the television series upon which it is based.

Starting off volume two with a number of my least favorite villains from the television series, I had my doubts as to how I would feel about this volume as a whole. The only character more loathsome to me than Bookworm, Olga, Shame, and (shudder) King Tut is Egghead (oh, and he’s in the NEXT volume, I believe), so my expectations were low. These were never what you hoped for when flipping on the television as a kid. You wanted the Joker (who makes one story appearance within), Catwoman, the Riddler, or the Penguin.

But what I discovered here is that this mélange of lesser villains, those created specifically for the television series to fill out the ranks of loud and crazy foes for Batman and Robin to defeat every week, actually work magnificently in this format — far better than ever before.

To some degree, it’s because they don’t take themselves too seriously after all. King Tut is a complete boob, but the art style of Ruben Procopio — a sort of Kyle Baker-esque flurry — complements his character so wonderfully. Joelle Jones creates an absolutely stunning Cleopatra (not to mention, Batgirl) that far transcends how that character looked in Technicolor, or even on today’s upcoming Blu-ray release.

And while it completely defies every artistic convention in the rest of the book — sharp inking, bright solid colors, and nearly no shading — Ruben Procopio’s handling of Batman and Robin out west, facing off against Shane and his gang, felt like it was right out of a 1960s Highlight magazine. The beautiful painterly style is so out of context here, but then again, so is Batman when he’s removed from Gotham City. And making the most of that opportunity is one of the things that makes this book so great. 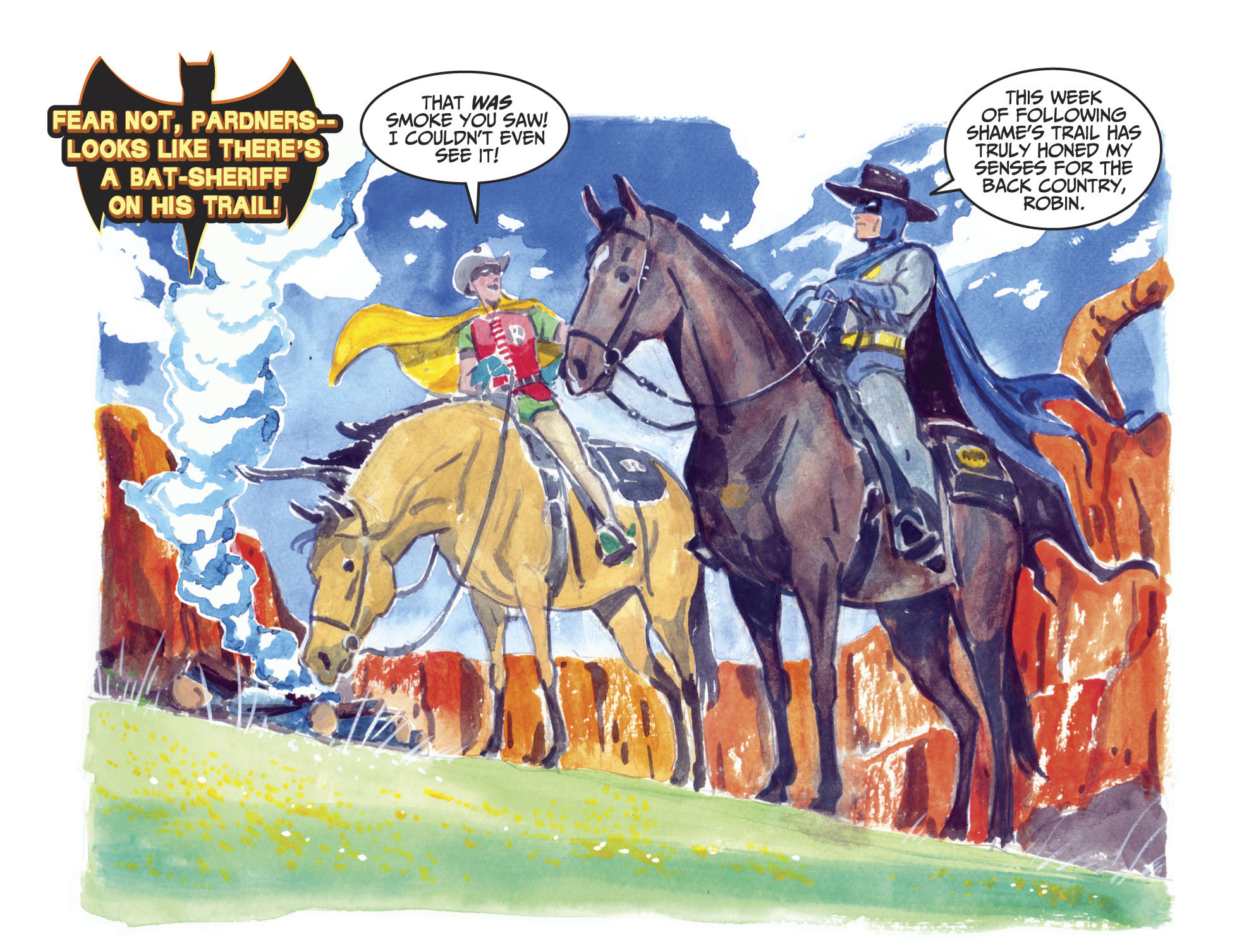 Parker and Peyer deliver consistently solid stories that vary in how tongue-in-cheek they are from chapter to chapter. The book opens with Robin probably at his height of annoying and Bruce Wayne beyond expectation in patronizing him, but over the course of time, it becomes more natural. And when you are able to place these characters not necessarily as Adam West and Burt Ward, but THIS particular Batman and THIS particular Robin, well, the stories get that much more enjoyable.

A fun series totally made for fans of the show AND those who may never have had the pleasure, Batman ’66 Volume 2 continues the high quality that launched this series and its unmatched wackiness in today’s comics. Sure, you can come for the gorgeous Mike Allred covers (with fun additional gallery in the back of the book) and nostalgia of it all, but stay for the sheer fun of the stories. We all lament the lack of fun in today’s comics, particularly in an all-ages Batman title. Well, it’s right here. Where else are you going to get Batman punching out Abraham Lincoln?