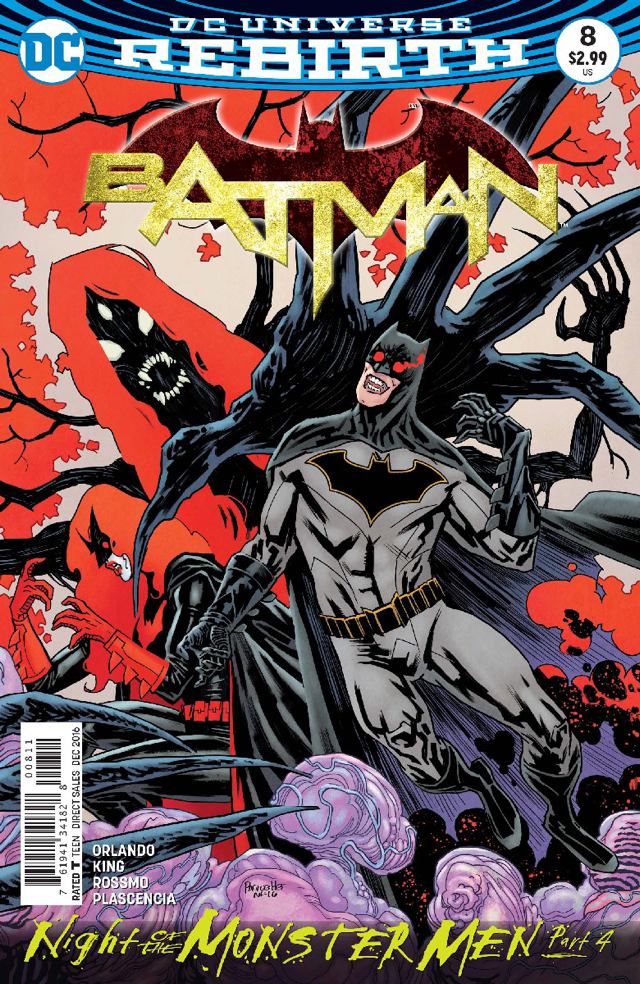 The Night Of The Monster Men continues as the Bat-family faces a challenge unlike any they’ve faced before….

For the most part, I’ve enjoyed this crossover. It’s been a nice change of pace from what we’ve seen in Batman stories in the past few years, and it has a crazy-comics-story feel about it that is really fun. The Bat-family against skyscraper height monsters that are stomping all over the city? That’s just the right kind of silly fun and in this issue I think Orlando puts the pieces together properly and keeps this crossover moving along nicely.

This issue gives the story a good amount of traction and leaves on a solid cliffhanger, with each of the Bat-crew facing a solid challenge and some very interesting wild cards in play. Orlando’s dialogue is solid and I like his voice for Batwoman, in particular. What continues to impress me as this series rolls along is how well it is building on each individual title. The threads of three series are coming together into one cohesive story without losing their individual identities, and the strength of Batwoman’s unit from Detective is on full display. I applaud Orlando’s use of the unique elements brought by members of this team to move this story in interesting directions and, on the whole, we’ve got ourselves a well written issue of Batman here.

Props to editorial for bringing Riley Rossmo in for this event as he delivers a fantastic chapter for his second issue on Batman. The edginess in his lines is perfect for this tale. The horror element that is inherent in his work sets a great mood for this issue and Gotham Girl and Nightwing’s monstrous forms are a riot. Rossmo handles the large cast like it is the easiest challenge he’s ever faced and whenever I see his name on a Batman issue, I will be reading it. Ivan Plascencia’s colour work enhances the pencils brilliantly and this is a really slick art battery working on Batman with issue #8.

The Night Of The Monster Men really kicks into gear with part 4 and I applaud where Orlando, Rossmo and Plascencia take this tale. It’s the right blend of seriousness and zany fun and I’m excited to see where this continues to go.