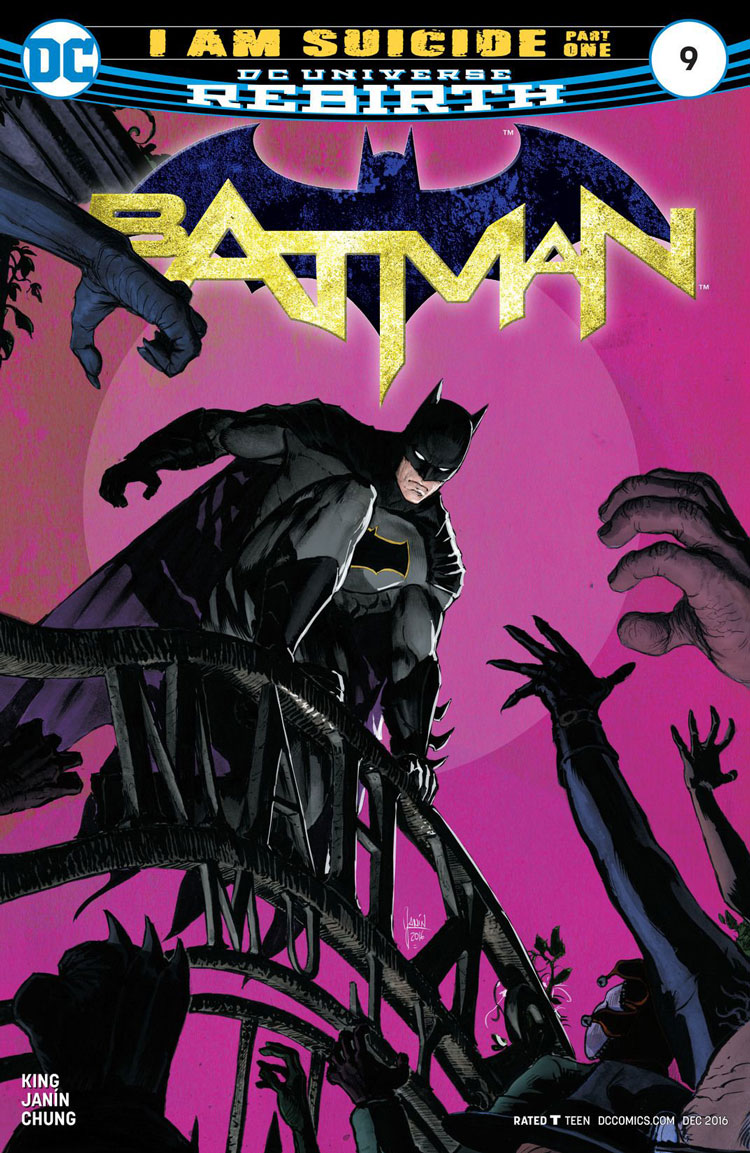 To save the sanity of his newest keep, Batman will dive deeper than he ever has before to retrieve the Psycho Pirate and restore Gotham Girl to herself. But in order to do that, he needs the perfect crew. Not the Justice League. Not the Outsiders. No, this one calls for suicide…

It’s very interesting to note, when reviewing (presumably) long runs of titles by a single author, when it started to really click. With Scott Snyder and Greg Capullo’s Batman, it was most certainly issue #5, the one with the turning pages and the Court of Owls’ dastardly maze. With Geoff Johns on Justice League, it was most definitely the last page of issue #12, the infamously reviled kiss.

These moments are, to my mind, where everything clicked for the creators, as well as for the fans in truly knowing what they were in for.

This is not to say that the preceding 9 issues (Rebirth special, “I Am Gotham,” and “Night of the Monster Men”) weren’t great stories. But that thing that Tom King does, that Tom Kingness we see in Vision or The Omega Men or Sheriff of Babylon wasn’t there. It’s here now. Boy, is it here.

King’s Batman is a good man willing to do dirty things to get a good result. He’s a man with friends (one in particular I am so over the moon to see returned to some level of respect in the DCU) and certainly with enemies. But it’s not Batman’s character that draws me into this comic so profoundly, but the way he inhabits the space of the page. And Batman’s not the only one.

Never having been much of a Bane fan outside of his regular appearances in Secret Six, I confess to never truly getting the concept of his creation. And in a quick three-page prelude, scripted by King and choreographed masterfully by Mikel Janin, I get it. I get all of it. The fortitude. The honor. The emptiness. The controlled rage. And I don’t even get it in my brain. I get it in that part of my stomach that clenches when I’m scared. Bane lives there now.

King and Janin truly built out this recruitment walk-through in Arkham Asylum like other writers will walk you through a thought process or have characters talk through a scene. Except there’s no internal monologue — no insight into Batman’s thinking in how he chooses his somewhat oddly constructed Suicide Squad.

But even so, I feel like King is taking us on a deep dive into Batman’s mind, if only through the mission. And it’s up to us to pick up the clues, unravel the spycraft, and decode the messages within.

This sense of spy novel drama is so beautifully rendered by Janin and colorist June Chung, giving us no more of the surroundings than we need in the sterile environment of Arkham, but still delivering poignant clues to what we’ve gotten ourselves into. The illustration of Ventrioloquist’s empty palm, for all its banality, is so threatening, so much more than the drop kick of the Bronze Tiger (swoon) or the sultry gaze of Arkham’s most dangerous villain, the one Jeremiah begs Batman not to take. The one in a straightjacket and Hannibal Lechter mask.

An intense first issue of the story that is most certainly going to lock me into Tom King’s vision for Batman for the long haul, “I Am Suicide” part one in Batman #9 is a book no fan of King’s work, Janin’s art, Batman, or the Suicide Squad can afford to miss. This one is a puzzle, and I’m more grateful than ever to be getting the next piece in only 14 days.