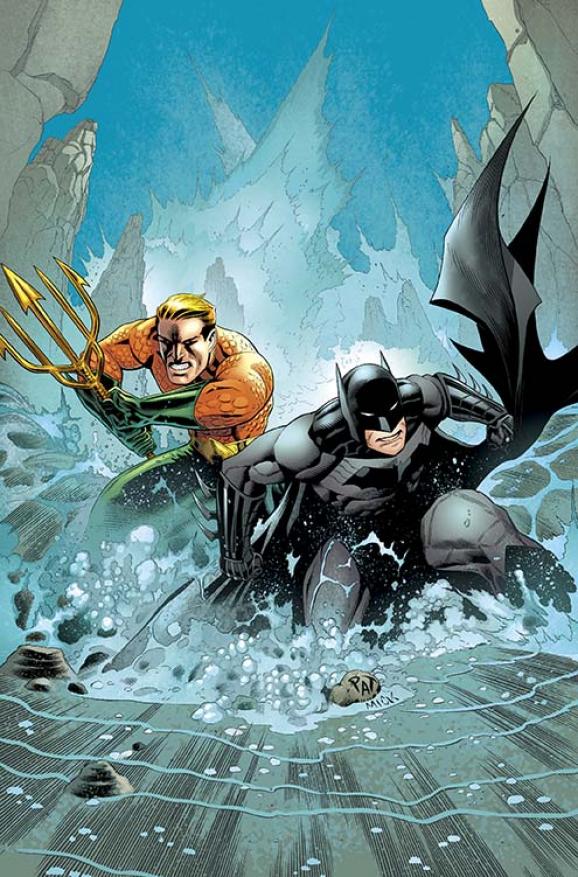 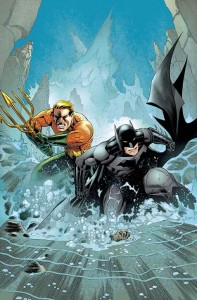 Something has been been brewing with Batman, as we follow up to last month’s cliffhanger in Batman and Two-Face in this week’s issue of Batman and Aquaman #29: The Hunt For Robin. Gotham’s Dark Knight sets out to discover why the dead bodies of Talia Al Ghul and his son Damien were exhumed from his cemetery. The underwater King of the seven seas coincidentally encounters Batman as he investigates high pitched whale screams eminating from the area. With Batman and Aquaman now in hot pursuit of Ra’s Al Ghul, who wants to bet that these two seemingly seperate instances might have something in common?

What has been amazing and applause-worthy for this title is how even in the wake of writer Grant Morrison killing off his creation Damien within the DC universe, writer Peter Tomasi and penciller Patrick Gleason have still found gracefully intriguing ways to tell stories in the absence of the title character. There has been and an incredible amount of authenticity to the subject matter issue to issue since DC’s Requiem, to the point of having Batman experience the Kubler Ross model of the five stages of depression and present entire issues based on each of the particular stages.

Why bring this up for issue #29? It’s worth mentioning because that same care and attention is used in this issue. The thought and direction are so wistfully applied inside the panels and amongst the high stakes gaudiness of superheroics that if you blink, you could miss it. Tomasi tactfully crafts and weaves his story here with precision. The dialogue between the characters masterfully outlines their intentions while still staying true to their personalities; Aquaman sounds like Aquaman, Batman sounds like Batman, and Ra’s Al Ghul sounds like Ra’s Al Ghul. Of course, Tomasi keeps his usually smart sensibilities of tone and demeanor throughout.

While this issue is able to masterfully evade being ostensibly pigeon-holed into your typical evil scientist story by the magnitude of the characters and premise, the art is the masterpiece that this issue can be celebrated for. Penciller Patrick Gleason delivers visually arresting panels on every single page.

Whether it is splash pages of a gigantic leviathan soaring toward the sky and freakish mutations, or panels of a square-jawed Aquaman losing his eyes from the shadows cast upon his face, or even page arrangements of Batman bloodily fighting his way through henchmen in the absence of any word balloons, gutters, or captions, it commands your attention and impolitely asks you to pay attention. The combination of inks from Mick Gray, Mark Irwin, and Norm Rapmund alongside colorist John Kalisz has been nearly pitch perfect for Gleason’s pencils in this issue.

Tomasi and Gleason have a clear direction that they share with their audience in this issue and upon finishing it, you will salivate for the next issue and arc. Damien and Batman fans alike that May have been led astray from boggled events and monetary sacrifices, should definitely jump on at this point so that they don’t miss out when this storyline reaches it’s peak.