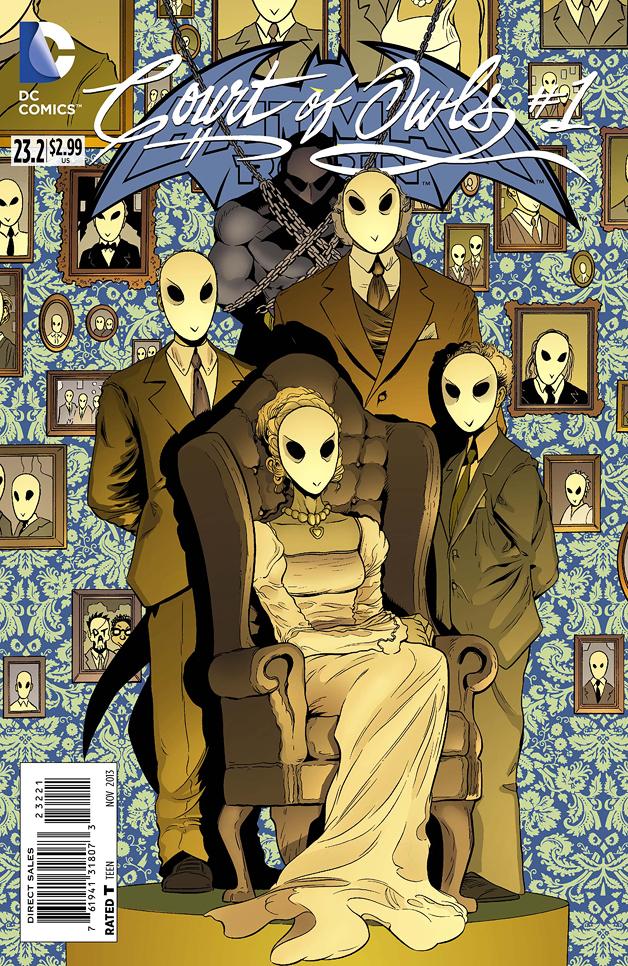 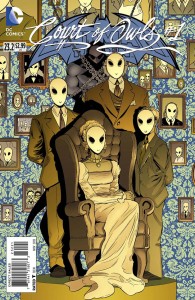 Beware the Court of Owls, that watches all the time, ruling Gotham from a shadowed perch, behind granite and lime. They watch you at your hearth, they watch you in your bed. Speak not a whispered word of them, or they’ll send the Talon for your head!

Holy crap. This book is creepy.

One of the few Villains Month featured characters that originated in the New 52, the Court of Owls isn’t your classic Batman antagonist. Conspiracy, shadow, murder and fear are certainly not alien to the Dark Knight’s rogues gallery, but never have they been packaged in such a compelling, faceless way. It’s difficult to believe the Court is even human at some points, and that’s just part of the eerie charm James Tynion IV brings to this special issue.

As a short tale designed to cast light on the Court’s origins, this latest chapter manages to take every potentially disastrous storytelling technique — time jumps, multiple unnamed and unrelated characters, in-story descriptive monologue — and turn each one after another on its head. Tynion is, in fact, using some of our worst fears as readers against us, cleverly twisting each potential narrative pitfall into a devastatingly perfect version of a history lesson. Far from falling into confusion or melodrama, the writer has honed each portion into a tightly constructed mini-drama, with raw fear built right into its center. It doesn’t necessarily matter that one occurs in 1974 and another in 1891, as the overwhelming sense of danger, like the hairs standing up on the back of your neck or an involuntary shiver, pervades every page. And the children! OH, the CHILDREN. From start to finish, their presence — while alluded to previously in Batman — drives a stronger sense of horror than we even got from their first appearances last year.

Lucas certainly lives up to Tynion’s script and more, as he delicately weaves a vision of Gotham that is at once unchanging and unique for each era. The dark, heavy inks and dramatic use of overwhelming shadow is only outdone by facial expressions of absolute terror or madness that occur throughout the twenty pages. The Owls themselves may wear emotionless masks (which is creepy in its own right), but the reflection of their true horror reflected upon their victims’ faces is the true evidence of their potency here. From normal human to costumed Talon, Lucas is able to make every aspect of the tale feel completely seamless and true to its environment, leaving us with a single story that holds together beautifully despite its many breaks and jumps.

Honoring well the tradition of frightening lullabies and urban mythologies, Court of Owls is truly fantastic work of writing and art, and an absolute must read for anyone even vaguely enamored with the macabre and horror genre — not to mention anyone looking for a good old-fashioned disturbing scare. You won’t find even a lick of Batman in these pages, and that’s all for the better. For if the detective was here, you might think there was hope or possibility for escape from the terrors within. Better to descend into the darkness and let it wash over you. Just don’t try to fall asleep too soon afterwards.