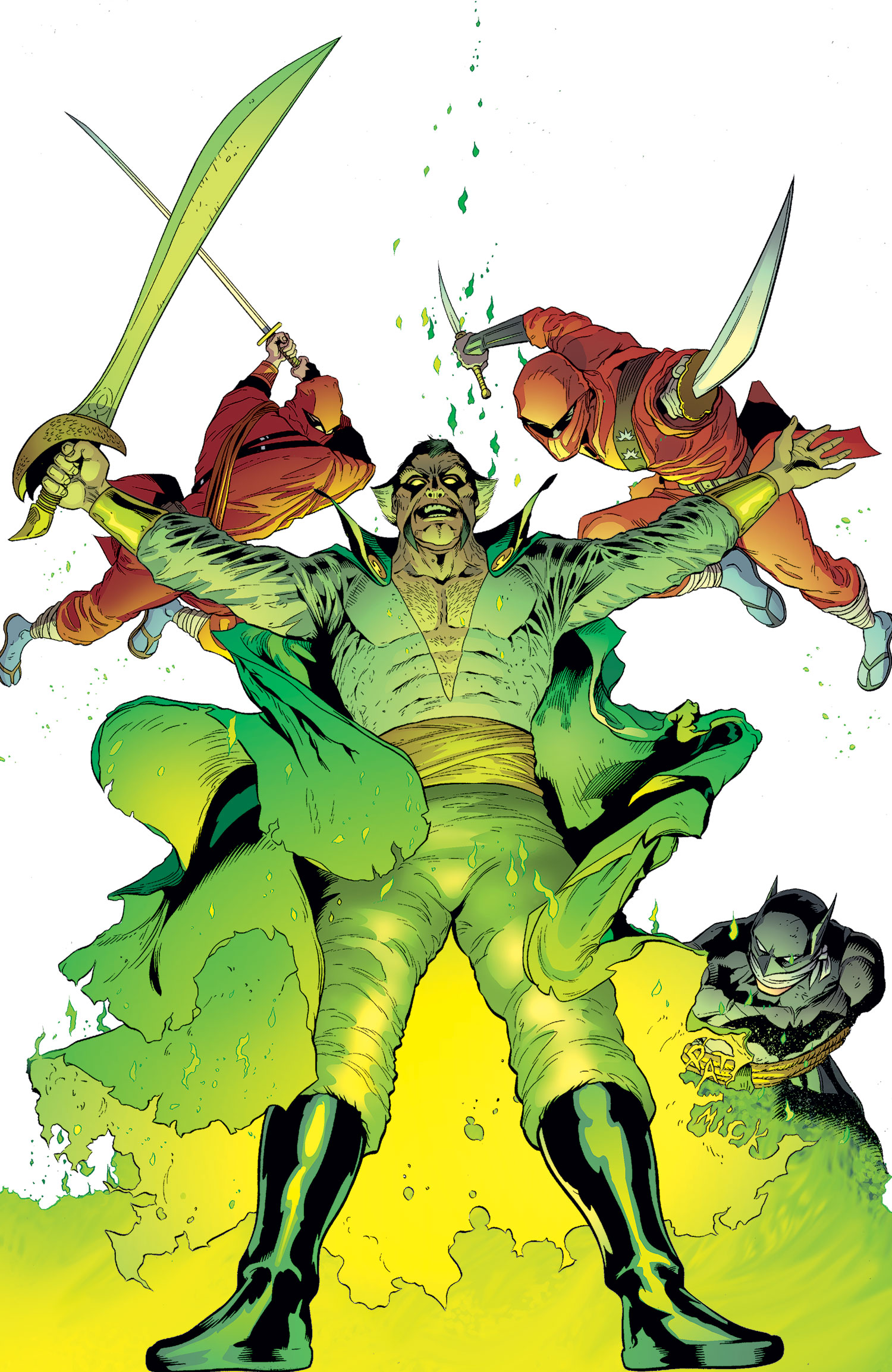 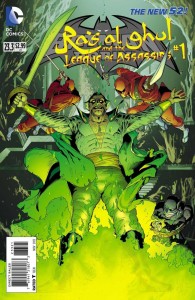 Fear not, disciples of The Demon’s Head – Ra’s al Ghul has returned in proper form to the DC Universe, and he’s almost exactly the man you remembered. Shirtless swordfighting with Batman? Check. Aristocratic sneer? Check. Enjoys bathing in alchemical pits? Check. Ra’s al Ghul is, for me, Batman’s best villain; as one of my favorite characters I was very excited and nervous about this issue. I needn’t have been. James Tynion IV and Jeremy Haun have an easy contender for best Villain’s Month book overall, meshing gorgeous storytelling with adventure and intrigue.

Firstly, I’m in awe of how much Ra’s al Ghul mythology Tynion wove into this story. To avoid spoilers, basically this book is a hard tie-in to Forever Evil. The Crime Syndicate dispatched some lackey to ask Ra’s to join up with them and along the way we learn about the history of the Demon’s Head. References to Denny O’Neil’s Birth of the Demon, Grant Morrison and Paul Dini’s Resurrection of Ra’s al Ghul, Morrison’s Batman and Son, even shades of Greg Rucka’s Death and the Maidens are present. The best call out, though, is the fantastic nod to O’Neil and Neal Adams’ landmark Ra’s al Ghul story The Demon Lives Again! from Batman #244. Clearly, Tynion did a lot of homework, and he’s including the best of all takes on Ra’s in this updated version. Also, the story is mostly told during a sword fight. That’s just cool.

The characterization is mostly spot on. Ra’s aristocratic sneer is ever present, and we also get a good look at the immortal mad man. His long-term machinations throughout history establish just how brilliant and strategically gifted he is (apparently he started World War I because he could, the scamp!) I like that Tynion shows us who Ra’s is first, then shows us who he is as he relates to Batman. They have a lot of history. Interestingly, Talia’s fate in Morrison’s Batman, Inc. still stands. Ra’s without Talia at his side is an adjustment for a long term fan like me, but new readers will take it in stride. I do have one lament – Ra’s al Ghul originally had an environmentalist streak in him. His motivation was the desire to kill off a large chunk of humanity to restore ecological balance to the planet (environmentalism was big in the 1970s when he was first introduced). I liked that wrinkle in his mad quest for power – his ultimate goal is a good one, the means are the problem. I’m not clear on what he’s trying to accomplish now, other than just power for power’s sake?

Jeremy Haun’s art is absolutely stunning. He got my undivided attention on page 5, and kept it in a vice grip until the very last panel. Every smirk conveys sheer attitude and arrogance. He’s almost bored while his opponent is fighting for his life. The use of cool green tones creates a kind of visual theme for Ra’s, a noted fan of the color. Small details like the filigree on the swords make the whole environment feel richer. And there’s one panel on page 10 that actually made me shiver – it was an image that didn’t even need words. It told you everything about Ra’s al Ghul in just a glimpse.

I’m excited to follow Ra’s al Ghul’s evil schemes once more. I’m even going to swallow my distaste for Jason Todd and pick up Red Hood and the Outlaws, where this story will continue under Tynion’s capable pen. That’s how much I like this book. In addition to being a great piece on my favorite baddie, it’s a perfectly executed one-shot story. You get a lot of action, a lot of drama, and bonus Batman. There’s little else you can ask for.