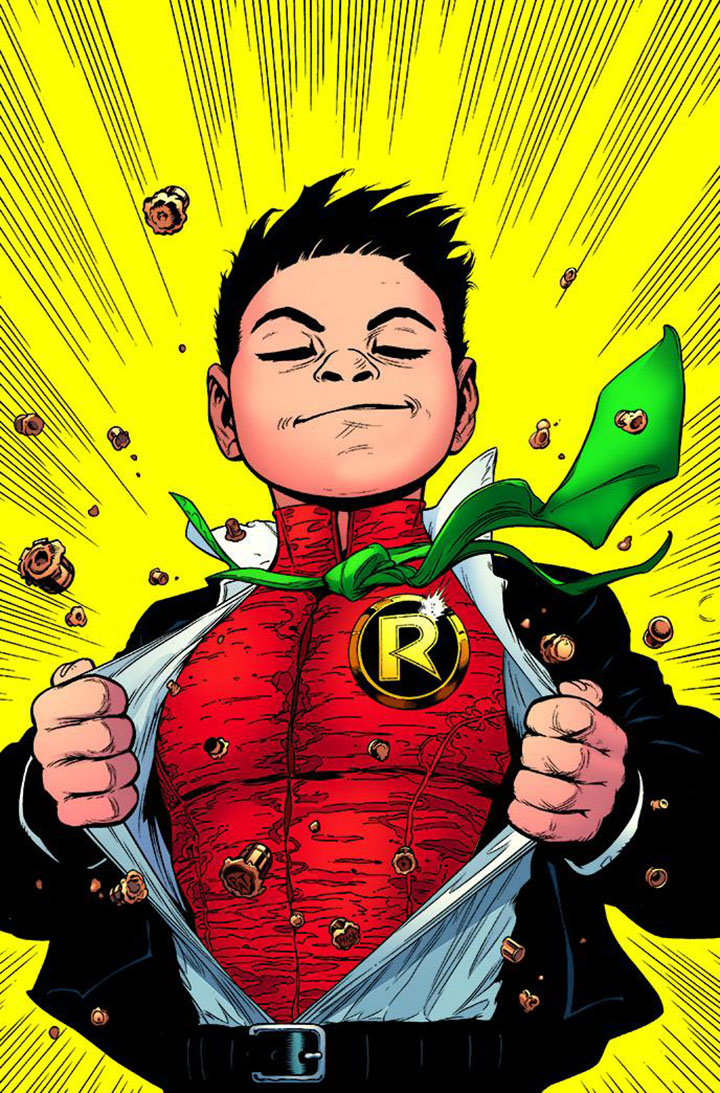 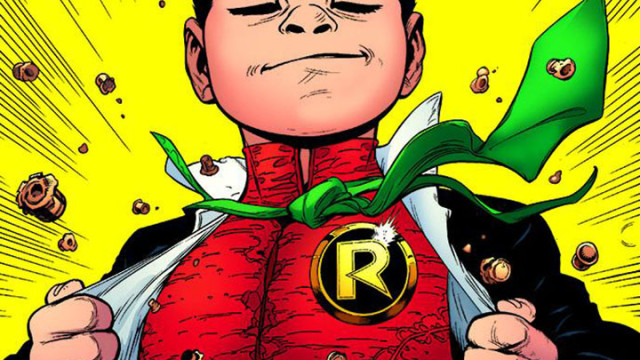 Damian Wayne has returned from the grave to once again ride alongside his father, The Batman, but things are a little different this time around. Sure, he’s still just a ten year-old boy. But he’s a ten year-old boy that can bend steel, reflect bullets, and fly into the stratosphere on his own accord. Yeah, the Dynamic Duo is in for some changes.

But what hasn’t changed is the partnership of Tomasi and Gleason, one of the last two original New 52 creative pairings to still be working on the same monthly book together. And as wonderful as their #1 was, by #38 they have reached a level of craft that puts Batman and Robin at the top of the comic market in quality and thoughtfulness.

It’s not just that this book is gorgeously drawn, although it most certainly is. Gleason hasn’t waivered from his perfect rendering of young Robin — a genuine ten year-old boy — with all the bravado and snark befitting a gifted child of that age. And now that Damian is even more gifted with these Apokaliptian superhuman powers, the balance between showing the toughness of a trained hero with the frailty of immaturity is more important than ever.

And that’s what we get from Gleason, in spades, as Damian wrestles with the demons in his head post-post-mortem, and embarks on a spontaneous task that nearly brought me to tears. His facial expressions alone tell so much of the story, that dialogue (although fantastic in its own right and sparseness) should not even be fully necessary. You can feel Damian’s frustration and fear radiating off of him, and contrasted with Alfred’s self-assured cool demeanor and Bruce’s closed off sternness, it brings so much life and love to the page.

Tomasi’s careful staging of Damian’s semi-tantrum — a mix of self-control with release — is stunning, and echoes back to so much of the very first storyline he and Gleason tackled with young Robin. Where he has him travel, and why, reminds us why this character needed to be returned to Batman’s side so desperately — but also that the trauma of one’s own death is not so easily overcome. Bruce may be sighing with relief, but the hard part is just beginning for the one who slept peacefully while his father’s world burned. It’s neither melodramatic or trite, but heartfelt and deep, even in the quiet moments.

To say much more would be to give away the awesomeness of the issue, but it’s fair to say that everything we love about Damian Wayne today is a sincere product of the love of two men. Nay, it’s not Bruce and Alfred — although they too are beautifully rendered in these monthly stories — but Tomasi and Gleason who have crafted this boy from what you expect from a child hero in a comic book, to a deeply profound representation of what you’d expect to see in a fully rounded hero, child or comic book character notwithstanding. If you’ve loved this book, here’s more of the same. If you haven’t been on board, here’s your chance to fall in love. Just bring some tissues along for the ride. You’ll need them.